The Book That Launched a Thousand Boats 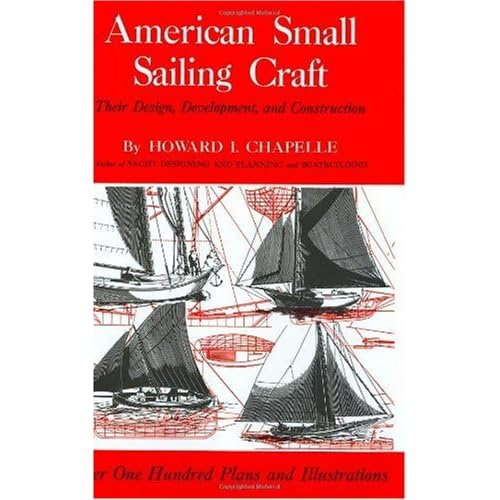 Howard I. Chapelle's American Small Sailing Craft, published in 1951, remains one of the most influential books ever written about historic small American workboat types.  You may think that's a narrow field, something like being the tallest building in Manhattan, Kansas, but the book helped inspire the wooden boat movement.  It includes lines, offsets, construction drawings -- everything you need to build these historic types.

Chapelle, a naval architect, made a career of documenting these types just as they were disappearing.  Sometimes he'd have a boat still sailing to work from, sometimes he'd have to measure a hulk and reconstruct it based on his research, sometimes he had nothing to work with but the lift model the builder had carved to define the shape he'd build. The result is a different kind of history, a history neglected by most historians, of how ordinary people got their living from the sea, of the needs, resources, and logic of the oyster fisherman and the Whitehall waterman.

The book helped inspire people to build replicas of these workboat types.  Chapelle gave the history of those types and argued that they had evolved over time for use in the conditions prevailing where they were used, and that they were the most practical way to economically get on the water.  He became the curator of the Division of Transportation of the National Museum of History and Technology.  Today, if you don't want to work from the small plans in American Small Sailing Craft, you can order plans from the Smithsonian, and get them for a lot less than most commercially available plans.

I've owned an 18-foot sharpie skiff built from that book, and regularly sail a 35-foot New Haven sharpie at the Center for Wooden Boats for our Cast Off program, which gives people a taste of sailing on traditional craft with free sails every Sunday.

These boats aren't as fast as a modern yacht, but they are roomy, practical and fun to sail.  I've seen dozens of boats built from the book, and sailed on more than a few.  I've concluded that he was right about the pleasure and practicality of these boats.  I've also restored a couple of racing dinghies and owned a racing keelboat, and I can tell you he was certainly right about the cost.  When I bought a competitive Snipe mast, I found that a new one would cost me about $1,200 (I went with a used one.)  My 18-foot sharpie had a mast that was basically a small tree with the branches lopped off and the bark removed.  The tree must have been about the size of those used as a municipal Christmas tree in small towns.  I've always wondered if the fellow who built that mast actually had to pay for it, or just waited for the right tree to show up after Christmas.

Of course, part of the reason people build wooden boats has nothing to do with cost.  A wooden boat is in some ways the ultimate wood project, having no square corners and  providing the ultimate test of craftsmanship when you see how it handles the sea. Every aspect of the boat is made by human hands and took skill and personal attention. Unlike something popped out of a mold, there is the risk it could be done wrong, and the satisfaction of doing it right.

Workboats tend to have large cockpits and to be designed to carry big loads.  This makes them delightful for piling a big crowd of friends into and banging around the bay for a day.  Modern dinghies tend to be built around the need for speed, with too little rocker to carry large loads.  A boat designed to plane, when too heavily laden, sinks the transom in the water and becomes a pig.

The wooden boat movement got started in the US.  I recently read Iain Oughtred: A Life in Wooden Boats, and was surprised to learn how late the movement was in getting started outside the US.  No one had done as much as Chapelle did in documenting the workboats of other nations.  Those books that were available didn't include offsets, so you couldn't loft a boat from them.  Oughtred has partially filled that gap for British types, most notably double-enders based on the Scottish Yole.  But at the point where the wooden boat movement in the US had matured to the point where it had its own magazine, Oughtred was having a difficult time establishing himself in Britain.  WoodenBoat magazine, searching for signs of a wooden boat movement in England, 'discovered' Oughtred, and by publicizing his work helped give the British enthusiasts a push.

But I have to wonder where all this would be without American Small Sailing Craft, and what my life would be like without it. I discovered the book after I'd discovered the joys of sailing, while my family was living on Okinawa, where wooden boats of traditional design were very necessary for many people to make their living. (Information on the traditional sabani here.)

And I'd learned to sail in Maine, where traditional wooden boats were still loved and used (and are, to this day.) 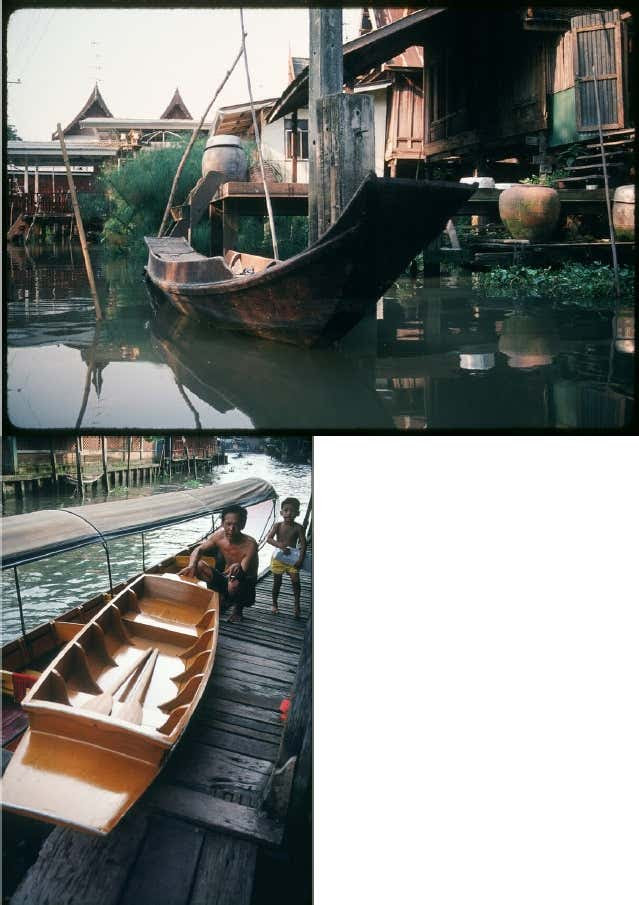 And my first boat was a Thai sampoa, similar to the lower picture here, which I had built for me some years ago, which now hangs in the rafters of the boathouse at the Center for Wooden Boats.

It's given me a connection to the long life of mankind, to the Australian aborigines who crossed the Wallace Line long, long ago -- genetic studies indicate they split off from the rest of humanity between 62,000 and 75,000 years ago, and the only way to get to Australia then was by boat, which is why, when Europeans arrived, they found that humans and dogs were the only placental mammals on the continent except for bats, who could fly there.

It's given me a connection to my father's favorite uncle, Alec MacBeath, said to have been an Astoria pilot. The only picture I have of him is on a small wooden vessel with a distinctive rail that allowed the pilots something to grip without limiting their ability to grab a ladder and climb up the side of a ship, so she was probably a boarding boat.. 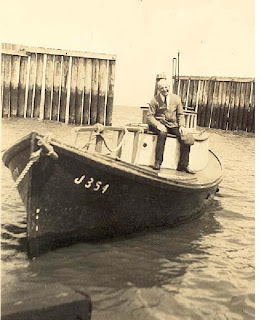 Not that I have chosen to build replicas of old workboats for myself, although I love sailing them, and learning from them how the old sailors thought, and how different their boats were from modern yachts.. I've studied them since those long-ago days, daydreaming over a library copy as a teenager, and tried to apply what I've learned to my own boats, Black Swan and Meerkat.

And of course, I've learned that boats are not just tools for moving. They come to signify things to us, like adventure and exploration, like excitement mellowed with faith in their seaworthiness. The boat becomes an extension of you, a companion who speaks in creaks and whistles with its rigging, needs your care, and to be kept in mind, and carries you safe home from the storm. Whether you're nursing a frail old bundle of sticks along or getting to know one still smelling fresh with the first coats of paint, a wooden boat is such a made thing, such a living thing, it has a good deal of humanity in it (and in the case of those I've built, the vessels share some DNA with me, from the clumsy use of a chisel, but perhaps not enough to be a blood relative.)*

And all this became part of my life because Howard Chapelle was interested enough to make the knowledge of such boats his life work.

* From Master and Commander: