Viktor Mikhailovich Vasnetsov, The Knight at the Crossroads, 1882.

Here's one for those of you not yet depressed, from the International Business Times:

"Marx, among other theories, argued that capitalism had an internal contradiction that would cyclically lead to crises, and that, at minimum, would place pressure on the economic system.

"Companies, Roubini said, are motivated to minimize costs, to save and stockpile cash, but this leads to less money in the hands of employees, which means they have less money to spend and flow back to companies.

"Now, in current financial crisis, consumers, in addition to having less money to spend due to the above, are also motivated to minimize costs, to save and stockpile cash, magnifying the effect of less money flowing back to companies.

"'Karl Marx had it right,' Roubini said in an interview with wsj.com. 'At some point capitalism can self-destroy itself. That's because you can not keep on shifting income from labor to capital without having an excess capacity and a lack of aggregate demand. We thought that markets work. They are not working. What's individually rational...is a self-destructive process.'"

Those of you who managed not to sleep through Econ 101 will recall what Roubini is talking about as the paradox of thrift. In a balance-sheet recession, everyone needs to deleverage, so everyone saves more and spends less -- but in the economy as a whole, savings have to equal spending, so the fall in spending causes savings to fall because nobody's making any money to put in their savings account, and they are spending only what they're forced to spend -- which, after they loose their jobs because of the fall in spending, means they end up with less savings.

It's a well-understood phenomenon which we saw in the Long Depression, the Great Depression, and the current Long Recession. One of the results of such a fall in economic activity is that people see all they've worked for evaporate, see no opportunities for themselves, and get fed bleedin' well up.

This produces social unrest. In the Long Depression and the Great Depression, it also was exacerbated by monetary contraction, which produced deflation. Deflation transfers wealth from debtors to creditors, because the principle they owe becomes worth more while their wages decline (see Spain, right now, where the situation is made worse by the fact that after the bank forecloses and takes your house there, you still owe the bank loan on the house.) And the Long Depression, though it officially ended after six years, was followed by a weak economy that kept falling into short periods of negative growth until World War I.

In the three instances under discussion, inequity was already growing in part because of globalization and technological change that, while producing growth, increased the leverage capital had over labor. I find it interesting and informative that in the late 19th century, as  in the current day, we had people trying to explain to us that the inequity in economic outcomes was not injustice, then with social Darwinism, now with something like Objectivism. I consider both of these examples of the "just world" fallacy. As I've noted before, Robert Browning poetically explored this fallacy in Childe Roland to the Dark Tower Came, when the hero spoke of seeing a blind, gaunt horse:


Seldom went such grotesqueness with such woe;
I never saw a brute I hated so;
He must be wicked to deserve such pain.


Such justifications might make you feel better if you're doing pretty well, but if you are one of those who "must be wicked to deserve such pain," they are unlikely to be convincing.

So you get rebellions against the established order. Anarchists shoot archdukes, Italian Marxists become Fascists and take power, a would-be artist aims his fury at Jews and comes to power in a German state where democracy stands paralyzed by factional enmity. We can hope not to see this again, but Roubini connects the unrest in the Arab world and the riots in Britain to the frustrations produced by poor economies.

This is why it's such a shame we've managed to forget the lessons learned from the Depression. People become restive under a regime that can't produce results, and look to others who promise results. Radicals on both left and right are empowered, and gain adherents. Britain's riots will end, but the unrest inside the rioters will remain, and unless some means can be found to make the economy work better, we can expect political movements to take root in this soil.

Most of those who promise solutions won't have them, but will be opportunists exploiting the unrest. President Roosevelt was unusual in that he did have some people around him with really good ideas. John Maynard Keynes, by the way, wasn't one of them. Roosevelt met him, but didn't take his advice until the coming war forced him to. He did, however, do something quite important in the area of money: Executive Order 6102.

It didn't actually take us off the gold standard, but it radically devalued the dollar against gold. It also made it illegal to hoard gold. France stuck with the gold standard long after most other industrialized countries had given up on it, and we can see the results here: 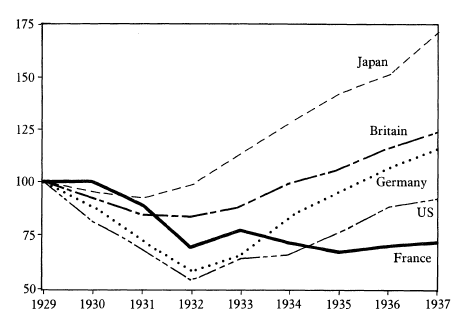 The result for France was disastrous, as we discussed in this post. While France continued to experience deflation, those countries that abandoned gold or devalued radically against it recovered in the order in which they did so. The burst of inflation produced by devaluing against gold helped the economy recover, and moves to support farm prices and labor unions helped eliminate deflation as well.

The modern narrative on the right, however, is that Roosevelt prolonged the depression by acting as he did. Apparently he should have followed the policies France followed. See chart above.

Of course, Executive Order 6102 was high-handed. It required people to turn in their gold at a price of $20.67 per once, and then set a new price at which dollars could be redeemed by foreign governments of $35 an ounce. That's a 70 percent inflation in the price of gold overnight. Roosevelt considered "price chiselers" to be part of the problem he was dealing with.

Now, Kenneth Rogoff is suggesting that what we need to put an end to what he calls the Second Great Contraction is inflation:

"In my December 2008 column, I argued that the only practical way to shorten the coming period of painful deleveraging and slow growth would be a sustained burst of moderate inflation, say, 4-6% for several years. Of course, inflation is an unfair and arbitrary transfer of income from savers to debtors. But, at the end of the day, such a transfer is the most direct approach to faster recovery. Eventually, it will take place one way or another, anyway, as Europe is painfully learning."


Of course, the non-arbitrary solution is to transfer wealth from savers to debtors by requiring that savers take a haircut on loans that cannot be repaid in full. I'm not convinced that such a process would be less arbitrary than inflation.

The problem is, how do we produce the inflation that might help us? I've been debating conservatives for three years now who kept telling me that the policies of the Fed, and the stimulus bill signed by President Obama, would lead to out-of-control inflation. It hasn't happened. A barrel of oil is worth less now in nominal dollars than it was when Obama took office. Commodities go up, they go down, but on balance, we don't have much inflation. Wage inflation would help households deleverage, but we won't see that until the unemployment rate drops. In the meantime, we have dissenters at the Fed who still think the real enemy is inflation, and the European Central Bank seems intent on fighting non-existent inflation.

Where is the Executive Order 6102 for Obama to sign? What tools, indeed, have we to end this crisis?

But Dr. Doom is right, we need to find a solution before people start shooting archdukes.