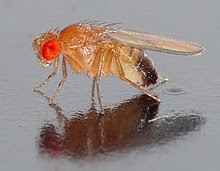 Legend has it that the mayfly lives for only a day, though in fact the Mayfly nymph lives much longer, and the lifespan of the adults can be anywhere from a few minutes to a few days. But this story is about the stereotypical one-day mayfly:

Why the mayfly does not prepare for the dark

The aged Mayfly sat on a leaf and complained.

"Look at that sun!" she said. "Going down like that and turning reddish. Not like the sun we had when I was young, back then it was rising."

A scholarly Mayfly nearby nodded, and spoke in a measured tone.

"Quite some time back -- several minutes at any rate -- I invented a science I call astronomy, and I've been making precise measurements of the sun's position. Soon, it will go behind those hills and the world will become very dark."

"Ha!" said the first mayfly, "it's an interesting theory, but that's all it is. I bet I can find dozens of mayflies that don't think it is certain the world will become dark."

"Yes, but the ones who have actually measured the position of the sun..."

"Are part of your little group of elitist lefty pinkos. Off with you! Alarmist! Prevaricator! It's just a conspiracy by all you sun-measurers to make us do your bidding!"

Why the fruit fly does not prepare for winter

Fruit flies live about a month.

"I don't mean to worry anyone," the fruit fly scientist said, "but the climate seems to be changing. In the last two weeks, we've seen a gradual decrease in nighttime temperatures."

"Nonsense," the fruit fly politician said. "It's warmer than it was this morning."

"But if my calculations are correct," the scientist said, "we could see dramatic changes in our world. We believe the entire orchard could be bereft of fruit."

"In my entire lifetime," the politician said, "fruit has only become more ripe."

"It's even possible that water could become hard instead of liquid."

The politician fixed the scientist with a multi-faceted eye.

"Sort of the way the pitch on yonder pine is getting thicker and slower-flowing the longer it's exposed to the air?"

"No, more like a phase change, from liquid to solid without becoming more viscous in between."

"You got funding to study this, did you?"

"Why yes, and I've done my best to use the money wisely to gain knowledge on important issues."

"Well, clearly, you want more funding. That's why you've come out with this silly theory. The solution to the problem is obviously to stop funding your research. God said, 'go forth, be fruit flies, and multiply,' and that's what we're doing, so God will be pleased to allow us to continue doing it."

(Happily, these events have occurred often enough in the evolution of these creatures that they are prepared to survive as a species.)
Email Post
Labels: allegorical fiction climate change likely stories