Is Herman Cain having a James Garfield moment? 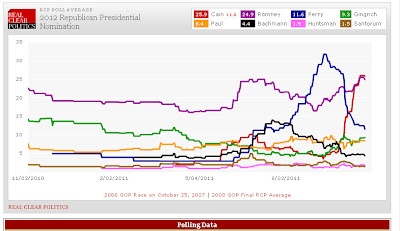 The tangled, Gordian knot of the poll trend lines for the Republican nomination reveals something important: Republicans really don't like any of their candidates.

Mitt Romney was riding the inevitability express until potential primary voters began to seek desperately for someone other than Romney to vote for. Rick Perry soared like a skyrocket, then exploded like a skyrocket, then fell to earth like an expended skyrocket. Herman Cain, who hasn't bothered to run a conventional campaign, is now the candidate leading in the polls.

His strategy of going where his book tour takes him and avoiding spending much time in Iowa or New Hampshire has something going for it: As soon as Republican voters get to know candidates really well, they abandon them. It's happened to Michele Bachmann, it's happened to Rick Perry, and it could even happen to Mitt Romney is they ever take note of the fact that looking over the stands he's taken on the issues during his career is like setting your iPod on "pander."

Not since James Garfield got the nomination by giving a rousing extemporaneous speech to introduce his favored candidate has anyone approached getting the nominee for president so casually.

Garfield gave a speech extolling the virtues of John Sherman and nominating him for president. During the speech he said, "And now, gentlemen of the Convention, what do we want?"

A voice called out, "Garfield!"

And Garfield was drafted. Well, not right then, he did get to finish his speech nominating Sherman, a man so uncharismatic his nickname was "the Ohio icicle." And it helped that the figure he described in his speech was considered by many to resemble Garfield more than Sherman. Had Garfield actually written a speech instead of speaking off the cuff, perhaps he would have managed one that would have served Sherman better. He worried, after the speech made him quite popular, that his sudden ascendance would harm his reputation with his peers. He was convinced that his time was not yet.

Are we faced with another Garfield moment, when a man who hasn't done the organizing and the groundwork could get the nomination?

I sort of doubt it. It seems likely to me that he'll stumble, as Bachmann and Perry did before him. In a recent CBS poll Perry came in behind not only Cain and Romney, but Newt Gingrich and Ron Paul as well.

But the fact that Cain could take over the lead in the polls mainly through charismatic performances at the sort of cattle-call debates the Republicans are now having tells me that the Republican primary voters are not happy with their choices.