Tall ship down: The Bounty sinks in hurricane Sandy

The replica of the Bounty sank today with the loss of at least one crew member. Captain Robin Walbridge, 63, who made the fateful decision to take the 52-year-old tall ship out and attempt to make St. Petersburg, Florida, despite the approach of Hurricane Sandy, has not been found as of this writing.

The body of Claudene Christian, 42, a direct descendent of Fletcher Christian, who lead the mutiny on the original Bounty, was recovered earlier today (Oct. 29.)

From the U.S. Coast Guard website, this final photograph: 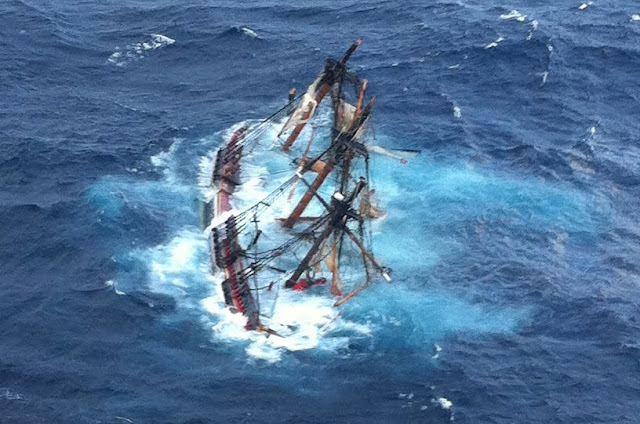 I went aboard the vessel in happier times, while she was in port. She was as authentic a replica as the shipwrights of Lunenburg could make her, except that she was about 10% larger, so there would be room for the camera gear -- she was built for the film Mutiny on the Bounty, released in 1962.

My friends on the Wooden Boat forum greeted the decision to take her out despite the hurricane with anger and disbelief. Wallbridge argued that the ship was safer at sea, but his decision is still puzzling because the crew is safer in port, and their lives are worth far more than any vessel.

Sandy killed 69 people in the Caribbean and has killed 11 as of this writing in the U.S., but somehow, having been on the vessel, this makes it real to me.
Email Post