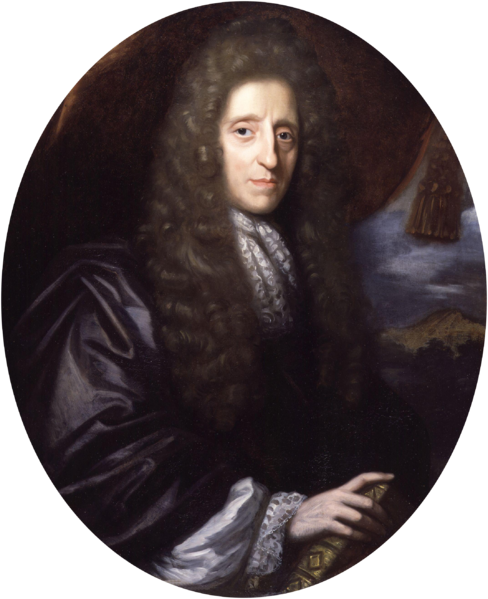 Locke is remembered fondly as one of the giants of liberal theory, the man who made freedom all about property. Students forced to study his Second Treatise on Government (or even, more rarely, to actually read it) are not typically informed that the pamphlet was so inflammatory that Locke never allowed it to be published under his own name during his lifetime. Charles II might not be so sure Locke was trying to kill him that he'd send agents to France to kill Locke for the Rye House Plot, but a pamphlet that said the subjects had a right to remove their sovereign if he did not serve them well might have sealed his fate.

To understand why property was so important in Locke's thinking, you must keep in mind that at the time he was writing, the voting franchise in England was given only to people who owned real property and paid tax on it.

During the English Civil War, the Levelers had argued for equality before the law, for popular sovereignty (the idea that legitimacy of the state rests on the consent of the governed) and extending the franchise. They also advocated religious tolerance, a principle that became dear to Thomas Hobbes when he was accused of blasphemy. One way of saying that every man should have the vote (women's suffrage was far in the future) was to claim that everyone owned property in the form of their own person.

This expresses a conflict inherent in the system of value Thomas Hobbes proposed. Remember, he said:

The Value, or WORTH of a man, is as of all other things, his Price; that is to say, so much as would be given for the use of his Power...

Which would seem to say that our values must be expressed in the marketplace, with money. Thus, your work must not only be desired, there must be effective demand, that is, demand backed by money. A starving pauper, then, would not be able to express what bread meant to him, and would not have his needs met. But the sentence continues on,

...and therefore is not absolute; but a thing dependant on the need and judgement of another.

Must need and judgment only be expressed through property? The New Model Army, raised by parliament to oppose the royalist forces, had officers who were often difficult to tell from the enlisted men, because they did not possess wealth and rich clothing. The technology of the time relied heavily on foot soldiers with muskets and teams of men working artillery pieces. The age in which a knight wearing armor that cost more than most people would see in a lifetime was nearly invincible when faced with foot soldiers (unless they carried bows and kept their distance) was a distant memory.

It was an army that relied on the infantryman for its victories, and the people who carry the arms that are decisive in putting the government in power are not to be denied a voice in what that government does, even if they lack property. If the "need and judgment" of moneyed men is difficult to ignore, how much more difficult is it to ignore the "need and judgment" of armed men?

Yet, in the end, the new king, Charles II was crowned. The property requirement for voting, far from being eliminated, was retained and eventually strengthened. In 1712, the amount of property that was required to vote was changed (it had been set at 40 shillings in 1430, when that was a lot of money) to restrict the franchise more than it had been. In 1832, when the franchise was given to men owning property worth at least £10, vastly increasing the number of voters, only one man in five qualified to vote.

Locke's radical idea was that we are all born owning ourselves, therefore we all should have the rights of citizens. Further, he asserted that these rights are inalienable, meaning some rich fellow couldn't buy them off you, because you could not sell yourself.

That last bit caused a lot of trouble. Locke was aware of slavery, and in fact was complicit in it. He was a stockholder in the Royal African Company, which was in the business of purchasing slaves in Africa and selling them in the new world. He also helped draft the constitution of the Carolinas, which established a feudal aristocracy and made a slave owner the absolute master of his slaves. He did this while serving his great benefactor, Lord Shaftsbury, a Whig who should have known better. Locke wrote the Two Treatises of Government at Shaftsbury's prompting, and in the second, laid out his theory that we are all born owning ourselves and cannot be owned by another.

South Carolina was the first state to secede from the Union, in its declaration of the causes of secession clearly stating that it had to leave the union because the North was threatening to take away its citizens' property, the slaves, and pointing out that the constitution recognized the legal status of slavery.

But Locke's subversive notion that we all have some basic rights because we are born owning ourselves resonated precisely because so many didn't have those rights. And the progress toward greater liberty came because he understood that property was central to our understanding of rights, yet strangely, while Locke wrote extensively about what things and people might be regarded as property, he never defined what property is.

So let me have a stab at it.

Property is not objects, which exist whether they are owned or not. It is the rights, privileges and obligations society assigns people in regards to objects, and a system for expressing our values regarding objects. One might even say, it is the meaning of objects. We are, after all creatures who create meaning -- it is the essence of human society. Locke changed our understanding of human rights by addressing how humans fit into this system of rights, privileges and obligations.

But we should not think this is the only system of value and define all human action in the Procrustean bed of property. It is the essence of our political system that we have more than one way of expressing our values. We can express them through property interactions, directing our worldly goods toward some end, or we can express them outside the realm of property.

We express who we value as a political leader by voting, and consider it corruption when votes are bought. Voting, in fact, is meant to be a counterbalance to property rights, a way for the political sphere to correct the imbalances that can occur in property relations. After all, we've accepted Locke's notion that we own ourselves and cannot lose the rights we have as property to ourselves, but where is the effective demand if we have no money? After all, we've seen famine areas exporting food in Ireland during the potato famine and in the Soviet Union under Stalin. One man, one vote is a way of giving effective demand to people who have no power to express their values in the marketplace.