While these truths may be self-evident, they have never been self-executing

" For history tells us that while these truths may be self-evident, they have never been self-executing; that while freedom is a gift from God, it must be secured by His people here on Earth." -- Barack Obama 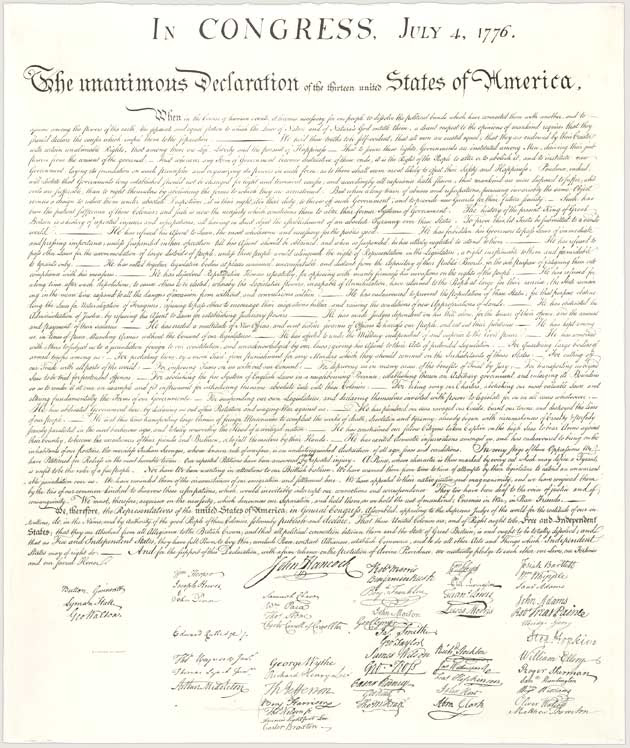 President Obama's second inaugural address will surely be remembered as a speech that very clearly identified the gay rights movement with the women's rights and civil rights movements, and his party with good treatment and citizen's rights for all Americans. It was a strikingly appropriate speech for this president to give on Martin Luther King Jr. Day.

The quoted line at the top of this post is essentially the rationale for the civil rights movement and the gay rights and womens' rights movement. It refers to this line from the declaration of independence:


We hold these truths to be self-evident, that all men are created equal, that they are endowed by their Creator with certain unalienable Rights, that among these are Life, Liberty and the pursuit of Happiness

John Locke said it differently in his Second Treatise on Government:


Sect. 87. Man being born, as has been proved, with a title to perfect freedom, and an uncontrouled enjoyment of all the rights and privileges of the law of nature, equally with any other man, or number of men in the world, hath by nature a power, not only to preserve his property,that is, his life, liberty and estate, against the injuries and attempts of other men; but to judge of, and punish the breaches of that law inothers, as he is persuaded the offence deserves, even with death itself,in crimes where the heinousness of the fact, in his opinion, requiresit.

Usually, this is shortened to the right to life, liberty, and property. All three, in Locke's view, were expressions of the right to property, which he defined as including your life. As we've discussed before, I view Locke's focus on property as an understandable failing in Locke's philosophy. By attaching his radical notions about rights to the established body of law relating to property, and asserting that we all hold property in our own bodies, he was in effect arguing for a huge expansion in rights, and took away one of the arguments against universal suffrage.

I like the Declaration's broader definition better. After all, what makes us happy? Once a certain level of material comfort is achieved, we want to be able to establish the meaning of our lives, our place in it, and gain the respect of those around us.

As the piece linked in the above paragraph mentions, the men participating in the Selma sanitation worker's strike carried signs that said "I am a man." They were striking, as much as anything, for the right to define themselves, and not be defined by others.

The president also placed great emphasis on the social contract.


But we have always understood that when times change, so must we; that fidelity to our founding principles requires new responses to new challenges; that preserving our individual freedoms ultimately requires collective action.

That is a theme you will find throughout liberal theory, and even Mitt Romney's Republican Convention speech, though it consisted in large part of trashing President Obama, gave a nod to the unity of the American people.

But Locke and the other thinkers that gave us our way of life didn't just give unity a nod. They viewed the social contract as  essential to people being able to enjoy their rights. Hobbes, contemplating the end of the 30 Years War, which depopulated parts of Europe as badly as the Black Plague had, called life without the social contract " solitary, poore, nasty, brutish, and short."

Jean-Jacques Rousseau said freedom was "obedience to the law that one has prescribed to oneself," (though not to be a law unto oneself; the means he prescribed for arriving at these laws required the social contract.)

The president's calls for us to move forward together come at a time when gun rights advocates are emphasizing their theory that the second amendment exists as a sort of self-destruct mechanism if they disagree with their government.


Senate Minority Leader Mitch McConnell (R-Ky.) addressed supporters in a frantically toned email on Monday, warning them of a looming effort to snatch up their guns.

"You and I are literally surrounded. The gun-grabbers in the Senate are about to launch an all-out-assault on the Second Amendment. On your rights. On your freedom," reads the opening of the email, according to The Hill.

"[T]hey're coming for your guns," the email exhorts.


At day’s end, then, the 2nd Amendment exists to permit American citizens to perform the “duty” Jefferson describes by resisting and defeating with arms a federal government that knowingly produces a “train of abuses and usurpations” that is designed “to reduce them under absolute Despotism.”

So how did the founding fathers respond when Americans tried to use their guns this way in the Whiskey Rebellion?


The Washington administration's suppression of the Whiskey Rebellion met with widespread popular approval.[99] The episode demonstrated the new national government had the willingness and ability to suppress violent resistance to its laws. It was therefore viewed by the Washington administration as a success, a view that has generally been endorsed by historians.[100]

In short, George Washington used a "well-regulated militia" to suppress those who thought they should use their weapons to gaurantee their freedom. Where did he get that idea?


A well regulated militia being necessary to the security of a free state, the right of the people to keep and bear arms shall not be infringed.

He drafted people into a militia to ensure the security of a free state. Would the supporters of the Whiskey Rebellion have wished to live in a state with no laws or taxes? No, they just objected to that one tax, which had been passed by duly elected representatives. They were, in fact, objecting to taxation with representation, which is a rejection of the social contract.

And that is the objection of the Tea Party, who are, in fact, a subset of Republicans.

This is what our president suggests we get beyond. His reference to people having to wait for hours to vote was a reference to vote suppression tactics intended to rig elections. This, like the tea party, is a reflection of ethnic panic at a time when the demographics of our country are changing so that  soon, non-Hispanic whites won't be a majority. In Ronald Reagan's day, a candidate getting 59% of the white vote would have won a presidential election. That will never again be enough, but Americans will have to agree who is an American in order for this country to work.

Historically, divisive, polarized politics been a problem when there's a lot of immigration. But it is inconceivable that we can have a nation with sufficient unity if we don't extend civil rights to all our citizens.Our polarized politics have everything to do with this, and it is a disease that we get over.