Apple's antitrust trial is under way,  and it could have a large effect on how we buy and sell books. But to understand why Apple's lawyer refers to the government's case as "bizarre," and why the government is bringing the case it is, we need to look at a little history.

In 1967, the Safeway grocery store chain, then the second largest in the country, signed a consent decree with the Justice Department in which they agreed to stop engaging in predatory pricing -- selling below cost in order to drive the competition out of business.

A generation later, in 1983, Safeway correctly perceived that the Reagan Justice Department would take a different view of their activities, and asked to be released from the consent decree, and was freed of its restrictions.

Under Reagan, the Justice Department was trying to eliminate as many as possible of the 1,300 antitrust decrees filed starting in 1890. The Reagan administration was influenced by Milton Friedman’s theory that if we stopped enforcing much of the antitrust law as it then existed, consumers would benefit because larger companies would have greater economies of scale. Friedman, in effect, repackaged laissez faire as "free markets" and effectively argued for a shift from keeping one company from dominating an industry -- what antitrust had meant since 1890 -- to simply policing price fixing. 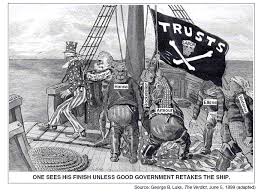 So the Justice Department shifted its strategy from trying to prevent companies from attempting to obtain monopoly power to concentrating on price-fixing, and still seems to follow the Reaganaught philosophy. Making your ideology a part of the institutional structure has got to be what real political victory looks like.

That ideology is the prism through which the Justice Department viewed Apple's agreement with publishers to use an agency model, where the publishers set the price of e-books and the on-line retailer sells the books.

Publishers wanted this because they saw Amazon attempting to dominate e-book sales. Amazon was selling many e-books at a loss in order to attract people to the Kindle and Amazon as their bookseller. But as Amazon's dominance of the market soared to its current 65% share, they became worried that a.) the perception of the value of their traditional, printed books would decline, and b.) Amazon would so dominate the e-book scene that it could dictate what they could charge.

Remember, the antitrust laws were passed in large part because farmers found that monopoly railroads were charging so much to take their crops to market that the farmers were failing. In a sense, they were consumers, because they were buying transportation services, but the concern was not with the retail price customers were being charged for the grain, it was for the way grain producers were being squeezed by the carriers.

Now, Wal-Mart (for example) is free to squeeze producers as hard as it wants -- I know someone who refuses to wholesale to them because he wants to sell to a diverse group of retailers who he can bargain with freely -- and the Justice Department seems not to care about predatory pricing as long as consumers get low prices. Some communities fight the arrival of Wal-Mart because they fear having their towns hollowed out, with local retailers deliberately targeted to be driven under.  And Wal-Mart isn't the second-largest seller of groceries as Safeway was in 1967, it's the largest.

The problem is that the driving factor here doesn't seem to be economies of scale, although Wal-Mart is well run, so much as pricing power. If Amazon can dominate the market for e-books, it can appropriate more of the profits from them, squeezing producers the way the old railroad barons did.

The government narrative is a bit different. Conspiracies to raise prices are an old story; even Adam Smith's 1776 tome, The Wealth of Nations, mentions them. Their assumption is that pricing power lies with the producers, who are conspiring to charge consumers more.

Now that the original theory of antitrust law seems to have been forgotten, that's what they're left with. And it's a real issue -- prices on e-books jumped right after the iPad was introduced, and have fallen since the Justice Department took action against the publishers. The five publishers who had signed on to Apple's agency model have already signed consent decrees with the Justice Department, and Penguin's CEO has already given testimony that seems to bolster the federal case.

Why should readers care if the publishers get squeezed? Well, remember, Amazon is a publisher, too. The more it squeezes other publishers, the more it can take the business of publishing in-house, where its vertical integration makes it a lot easier to make money. Ultimately, it may be a question of whether we want one gatekeeper for the long-form discourse books represent,  one that decides what is for sale and what gets promoted.

This means there is another possible motive for the publishers to have preferred the agency model: They may have worried about their survival, about being supplanted by Amazon.