A 21' catboat for public sail 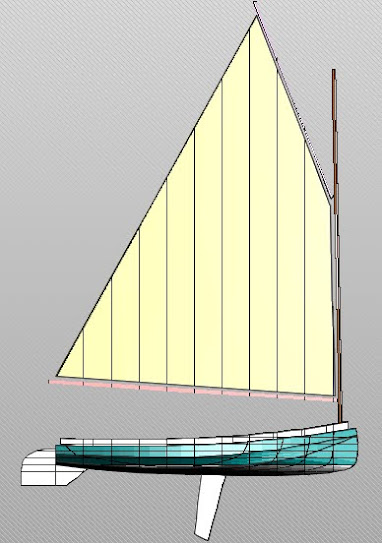 During the Seattle Wooden Boat Festival last weekend, I learned that the era of using sharpies to do the free public sails at the Center for Wooden Boats may be coming to an end. We may get another Bristol Bay gillnetter, or find some other solution.

I propose a solution that has more to do with the history of the Center for Wooden Boats and the Northwest lumber industry than with traditional Northwest types.

The Center for Wooden Boats started out as a sort of summer job for Dick and Coleen Wagner, operating boat livery out of their houseboat on north Lake Union. The difference from most such operations is that they didn't choose some low-maintenance rubber ducky, they chose to open a livery featuring traditional wooden boats, especially Beetle Cats.

The boats attracted a following of people who didn't just want to rent a boat, they wanted to have classes on building boats. They wanted to preserve, not just the objects, but the skills associated with wooden boats. And they loved the fact that they could sail types of boats they would normally only see in books.

Well, it followed that the boat livery became, instead, a museum where you could sail the exhibits. And one of the outreaches that recruits people to volunteer and take classes is the free public sail offered every Sunday. It is, as someone told me over the weekend, the wide end of the funnel.

For most of its history, the public sail has relied upon a New Haven sharpie, the Betsy D, and an Egret replica, the Coleen Wagner. We also had a Bristol Bay sailing gillnetter, but for the first few years almost no one would sail it. I convinced Greg Reed, then the livery manager for CWB, to find enough ballast to make the stern sit lower than the bow, and the boat was transformed. It is now quite popular among the skippers for public sail, though still not terribly maneuverable.

We've had two other boats that have been successful in public sail, our Woods Hole spritsail boats, 13 1/2-foot catboats based on the 19th century lobster boats from Woods Hole, Mass.

Now, one of the major aspects of the lumber industry in the Northwest is the plywood mills. Some were co-op mills owned by the workers, most were owned by the big lumber companies. One of the things they did was launch a campaign to promote the use of plywood in boat building, spawning the great age of home-built boats in the 1950s. The Thunderbird class was the product of a contest for a plywood boat design sponsored by the plywood industry. Too few of the boats at CWB reflect this important age of wooden boating. 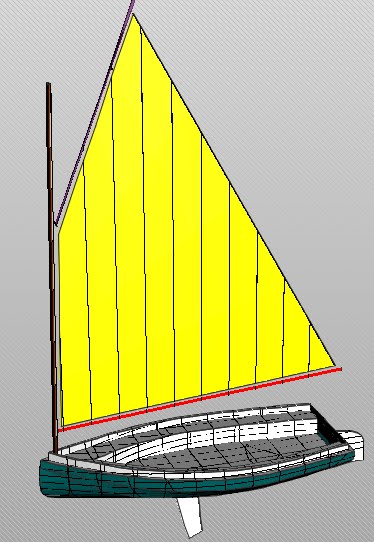 I propose a plywood catboat for public sail, and I think it would be easy enough to sail for CWB to use in our sailing instruction program and even the sailboat livery.

The boat would be laid out like a Woods Hole boat, with a large cockpit surrounded by a tall coaming only inches inside the deck.

It would have a deep, narrow centerboard, more efficient than the old fashioned pie-slice shaped boards. It would have a short, steep skeg instead of the traditional long skeg so that it would be more maneuverable than most catboats.

The boat would be about 21 feet long and about ten feet wide. It would have plenty of initial stability, which should enable it to get a good rating for carrying capacity from the Coast Guard.

It would carry the traditional catboat rig, with a low center of effort. I figure it should be fine with about 300 square feet of sail and about 500 lb. of ballast so the boat doesn't get squirrely when sailed light.

The plan is to build it in stitch and glue with 3/8 inch plywood, glassed for abrasion protection. The boat will probably weigh about 1,000 lb. without the ballast, and it's designed for a displacement of 2,900 lb., so with the weight of the boat and the ballast at 1.500 lb., that leaves about 1,400 lb. for payload. That's about eight people, or one crew and seven passengers.

The panels develop very well, and all are well under 24 ft. long and less than 4 ft. wide, which fits well with the dimensions of the plywood. There's actually less stress in the panel with the catboat bow than in the bilge panel. 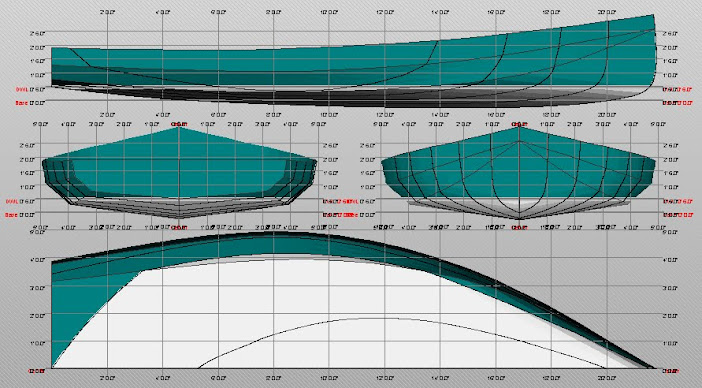 The chine enters the water forward at about the same distance from the centerline as it leaves the centerline aft, so weather helm, always a problem with catboats, should be under control.

The underbody will look more modern than the topsides, so the boat should surprise some people with its performance. 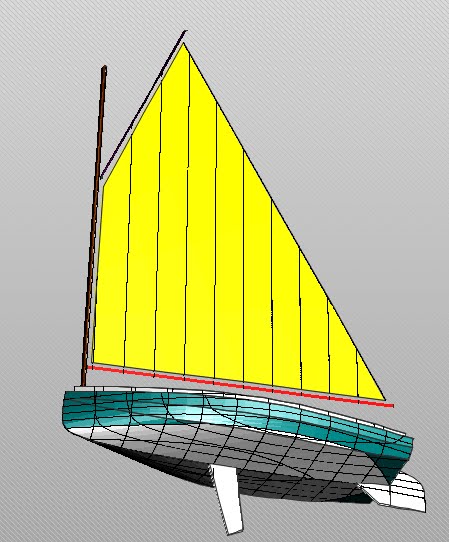 I believe such a boat would offer low first cost, low maintenance costs, usefulness in at least three of the Center's programs, and deliver a good experience to those who sail it.