Cat People, dog people, and the character the choice reveals 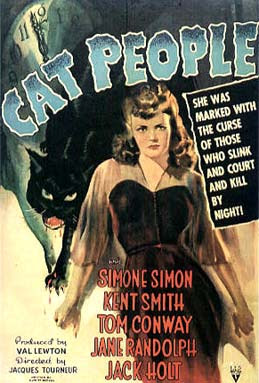 "One is permitted to assume an attitude of placid indifference in the matter of elephants,
cockatoos, H.G. Wells, Sweden, roast beef, Puccini, and even Mormonism, but in the matter of cats it seems necessary to take a firm stand....Those who hate the cat hate him with a malignity which, I think, only snakes in the animal kingdom provoke to an equal degree."


We usually think of dogs as the pets of choice for the macho, huntin' and fishin' type of manly man, but Ernest Hemingway was a huge cat lover, calling them "purr factories and love sponges," according to the Hemingway Museum.

Surveys of dog lovers and cat lovers have shown that cat lovers are more likely to be introverted, and on average are more intelligent than dog lovers. Not bad characteristics for someone like Hemingway, who made his living by sitting alone for long periods of time writing.

A ship captain gave Hemingway a polydactyl cat named Snowball, and soon Hemingway had more than a dozen of Snowball's six-toed descendants around at a time.

Cats, left on their own, tend to live in social groups without a strict hierarchy. There is often an alpha cat, usually female, but the rest of the group isn't ranked one above the other. There's a dog-training trick where you make sure your dog knows it doesn't eat until after you, so it understands that it is lower in the hierarchy. This technique is meaningless to cats. If you try this on a cat, I assume they just think you're a thoughtless jerk who's stuffing your face while the cat waits for you to remember to put some food in pussy's bowl.

People who want to rule the world tend to prefer dogs. Albert Speer reported that Adolf Hitler told him in 1945, "I am surrounded on all sides only by traitors and betrayals. Only my bad luck is loyal to me -- my bad luck and Blondi, my German shepherd."

Blondi met her end a day before Hitler. He used her to test the efficacy of the cyanide pills he used to kill himself.

Not that this reflects badly on dogs or dog people. Surveys show that they tend to be more extroverted than cat people, and more warm and social. It is therefore not surprising that they are more likely to be married and have children in the house. Cat people are more likely to live alone, but are also more open to experience. Cats tend to live longer than dogs, so perhaps they are more inclined to long-term commitments, but the day to day commitment of owning a dog is much more stringent. Dogs need to be walked, and I've seen dogs develop separation anxiety only a few feet from their masters.

Dogs look up to you, and are obsessively dependent on their people. Cats think you are a big, warm member of the pride, neither above nor below them, but useful for providing a warm lap and having a real talent for operating a can opener.

Both are creatures that have, for most of their relationship with humans, had a choice of staying with humans or living on their own. Most have chosen to live with people, although there are far more colonies of feral cats in this country than feral dogs. This is because cats pursue smaller prey, and are therefore less of a nuisance than feral dogs, who tend to get picked up by the dog catcher.