The imaginary apocalypse of the apoplectic reactionary right

Donald Trump campaigned by constantly talking as if America were an apocalyptic wasteland.

New York is experiencing near-record lows in crime, and and its murder rate is about 1/6th of what it was when the Edward Byrne Memorial Justice Assistance Grant Program was established. The Justice Department is threatening to defund the program if New York does not end its sanctuary city status.


The program is named after a police officer who was shot while guarding an immigrant targeted by gangs for reporting their crimes. City police departments need the trust of the people who they ask to report crimes, which s why they are often not eager to be recruited as part of the mechanism for deporting some of those people.

Most people see the dropping crime rate and the general prosperity of the country and consider that things are not all that bad here. Trump and other reactionaries see a wasteland.

Andrew Sullivan recently interviewed a number of people who pass for intellectuals on the reactionary right for an article in New York magazine. They sound pretty bonkers.

Charles Kesler, for example, is a professor at Claremont McKenna College in California. He believes that we are at a crisis in American democracy. He wants to return to the rule of a party like the Republicans of the 1920s, and to a policy of limiting immigration, as the 1924 Immigration Act said, “that which can be assimilated with reasonable rapidity, and to favor immigrants whose standards are similar to ours.”

Perhpas Kesler is unaware that the law he so admires was one of the proudest accomplishments of the Ku Klux Klan, or at least they liked to take credit. Here's a Klan cartoon from 1924: 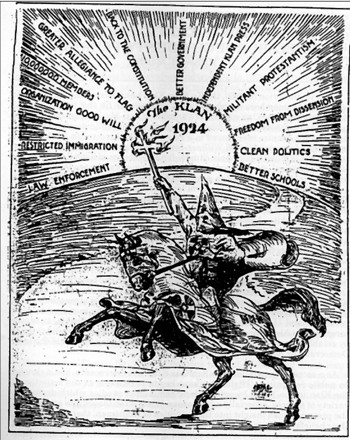 They didn't actually use the term, "drain the swamp," but their stated goals were very similar to the current crop of reactionaries.

Certainly the founding fathers would have had no objection to better schools (although I'm pretty sure they would have found Betsy De Vos, with her rejection of empirical data, objectionable) but they definitely would have rejected any effort to make a particular religion and would have realized that the "clean politics" claim was just a way of attacking incumbents, and the Klan didn't actually care about corruption if it made them and their allies more powerful.
Far from wanting to preserve the ethnic identity and culture they had, they wanted to mix in more foreigners. But then, they were men of the Enlightenment. They believed reason and ideas were more important than ethnic identity.

Reactionaries like to think that American democracy is at a crisis not just because of immigrants and multiculturalism, but also because "the administrative state," and liberal elites -- scientists, journalists, academics, as well as career government employees, has in some way hijacked government.

And here is where the apocalyptic vision comes in.


In Sullivan's piece, Kesler describes why he backed Trump.


It was an act of desperation, he explained. In classic reactionary fashion, he believes that we are living through a crisis of American democracy. The Claremont consensus (to put a name on this strain of thought) holds that beneath the veneer of constitutional democracy, we are actually governed by a soft despotism of permanent experts, bureaucrats, pundits, and academics who ignore the majority of the American people. This elite has encouraged a divisive social transformation of the country, has led us into disastrous wars, and has created a deepening economic crisis for the middle class. Anyone — anyone — who could challenge this elite’s power was therefore a godsend.

Now, it's true that we have elites in this country. They are no longer rich planters who own slaves, more often they are people with advanced degrees in understanding the problems we face. The British became comfortable with this group of people, and called them Mandarins -- the career people who served under elected officials of all parties.

There is an obvious danger in defining anyone with a deep understanding of the nation's problems as the enemy. If you rely on the knowledge of non-experts, you may be faced with the sort of thing H. L. Mencken was talking about when he said, "Explanations exist; they have existed for all time; there is always a well-known solution to every human problem — neat, plausible, and wrong."

More worrying than Kesler's views are those of some of his fellow travelers.

Michael Anton, who like Kesler and some other reactionaries is a student of Leo Strauss's work, is known for an essay in which he compared the situation of American democracy as being like being on Flight 93, the 9/11 aircraft that was hijacked for use as a missile aimed at Washington, D.C., but whose passengers charged the terrorists and brought down the plane.


“Charge the cockpit or you die. You may die anyway. You — or the leader of your party — may make it into the cockpit and not know how to fly or land the plane. There are no guarantees. Except one: if you don’t try, death is certain.” It’s not just that Trump is better than the alternatives: “The truth is that Trump articulated, if incompletely and inconsistently, the right stances on the right issues — immigration, trade and war — right from the beginning.”

Well, I did say they sounded bonkers.

The election and governance of President Obama seems to have been considered an apocalyptic event by these particular reactionaries. Anton, for example, has succumbed to the notion that Obama ruled in an unconstitutional manner. From Sullivan:

What he calls “Caesarism” is already here, as Obama’s abuse of executive power proved. Therefore: “If we must have Caesar, who do you want him to be? One of theirs? Or one of yours (ours)?” Krein put it even more plainly: “Restoring true constitutional — or even merely competent — government requires a fundamental transformation of the underlying culture and elite opinion. It requires, in a certain sense, regime change in America.”

The notion that President Trump will usher in more competent government is one of the more bonkers notions this crew has. Trump has proven to be a weak president despite his party controlling both houses of congress because he simply does not understand the powers of the president. He is a would-be strongman who is limited by his own incompetence.

The truth is, these reactionaries could not accept the legitimacy of a black president. Therefore, any use of power by that president must have been illegitimate. Any use of executive power by Barack Obama had to be an "abuse of power."

The reactionary moment in American history is not about abuse of power. In fact, people like Anton want to see exactly that, but in pursuit of their own goals.

Perhaps the country will get its fill of reactionary sentiment, and we can move beyond that. But having an intellectual movement that is unashamedly reactionary is one more indication that democracy is in danger.
Email Post
Labels: Donald Trump politics reactionaries rethinking liberalism