The Seattle Wooden Boat Festival was over the weekend of the 4th of July, and I'm only just now getting the photos up, but here you go, with a Sea Mew to start with:

But most of the time, I was judging the Quick and Daring boat building contest. This is the first year we did it without Dick Wagner, the founder of the Center for Wooden Boats, who shaped this competition more than anyone. It was the last thing he did as a hands-on project.

This year it looked like we would have eight contestants, but the Fisher sisters, who have won this competition several times, were unable to come. One contestant was unable to finish his boat, and two sank shortly after launching (it seems like every year, someone sinks -- it's part of the attraction of the event, like crashes in a stock car race.)

The wind was inconstant for the rest of the competitors. It blew from the north on the first leg, leading all the contestants to paddle that leg, then died, then shifted to the east, which was on the nose for the competitors for the second leg, and finally settled from the south, which meant that only boats that could sail to windward could finish a sailing leg. Of the four boats that were still afloat, only two completed a sailing leg, and one had to paddle back to the first mark because its sail was designed as a spinnaker, and it could not sail against the southwest wind.

The winner was Lickty Split, which was decorated as a banana split and whose team, Dusty and Corinne Wisniew, distributed free bananas as part of their showmanship. This was Dusty's 13th time competing in Quick & Daring (some were built with his son) and his first victory. Apparently, there's a learning curve. 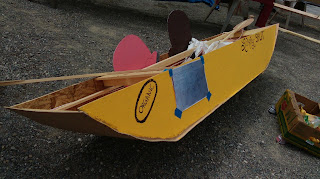 The boat had a keel, but it was the one with the spinnaker for a sail. The boat that performed best on the water was the cardboard catamaran, seen below on the dock. It's deeply veed hulls were sealed with varathane, which worked pretty well -- the boat showed little sign of melting even after continuing to sail for about 20 minutes after the race. It was surprisingly expensive and took a long time to build, but by being only one of two boats to complete the sailing let, it was guaranteed to win at least second place, which it did for its builders, Marc Rothschild and Dallas Duel (Marc scheduled his stopover from his wife's posting at the Mauritius embassy to the Austrian embassy so that he could compete in this contest.)


The red boat above, with paddle wheels,  a spoiler, and a Jaguar grille, would have easily won the Peoples's Choice Award if CWB still did that. 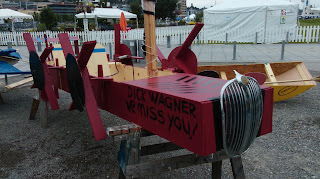 Rob and Merle Smith continued the family tradition of whimsy to their entries with F2, including showing up in suits intended to look like the ones racers wear, and helmets to match. Unfortunately, although the rig looked effective to windward, the boat did not have enough lateral plane to sail to windward, so it wasn't eligible to beat the boats that completed a sailing leg. They finished DFL. 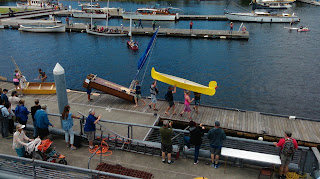 Bill Hass and Jana Boeking had the same problem with Ducky, a better version of last year's boat that sank. Ducky would have done quite well had they managed to complete a sailing leg. To my eye, it was the most attractive boat in the fleet, and it was the fleetest of the boats under human power. A canvas-on-frame canoe with a duck figurehead, it was waterproofed with paint and came back to the dock 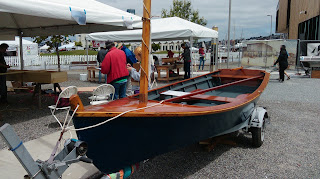 One nice thing, the winner of the Quick & Daring in 1987 showed up. Teal, built in a day to a Sam Rabl design, has been in use for 30 years and is still going strong. The flat bottomed 15 foot skiff still sports the same leg of mutton sprit rig she did 30 years ago when she won the contest, but Brian Lenz and Craig Vierling have added a varnished deck and some copper cupholders.

More on Teal below, in a letter Brian Lenz wrote to Judy Romeo, the staff member who put untold hours into organizing the event this year.

It is hard to believe but this year’s Lake Union Wooden Boat Festival will mark the 30th anniversary of the built-in-a-day launching of the “Teal”, shown below in a mid- 1990’s photo. I would be curious to know if any of the CWB members remember our build and race days. Craig and I had talked about building a boat, and being a couple of contractors thought the contest would be a great way to both make it happen and have a good time. Our only goal was to end up with a nice looking seaworthy vessel, so we didn’t think to much about scoring points in the contest. We brought a table saw, power plane, Skilsaw, router, sawzall, jig saw and multiple drills and screw guns, and the contest official who tried to stack them up on the scale merely chuckled and wrote down “100lbs plus”. We used all marine grade materials so our cost there was at least quadruple the $150 CWB reimbursement, which we were thrilled to receive. We had no grand ambitions about speed of construction, and figured we needed about six hours, but being construction types we of course missed the mark by quite a bit, and were finishing up in the dark at 9:30 pm with only the cleaning crew as onlookers. Ours was not a particularly sexy design, so I am sure we got few points in the Originality and Aesthetics categories, and since we built on Day 2 of the festival, we had no time to do any painting other than a rather thin translucent coat of white primer on the outside of the hull. It took six of us to gently lower it into the lake for the race, all collectively holding our breath and expecting water to come rushing in from some un-glued/un-sealed joint, but there was nary a single drop.

Now the race, after a very rough start, was an entirely different matter. We made a big blunder and located our two pairs of temporary plywood oarlocks way too close together, and were bashing into each other with every attempted stroke during Leg #1. A stiff breeze out of the north had picked up, with some rain added in, and we were falling so far behind the other five “paddle-friendly” boats that our fans (girlfriends, parents and friends) bailed out and went inside the Naval Reserve Center. None of the other boats had large and stiff enough keels or centerboards to handle the overly ambitious sails that had looked so good up on land. All five were getting blown off course and couldn’t get around the first buoy. We hadn’t had time to put a clip on the main sheet, so Craig was battling to thread the frayed end of the line through an undersized grommet in the clew, while I struggled to keep us pointed into the wind. He finally succeeded in threading the needle, pulled in as much line as he dared, and we were off on a beam reach at a speed that seemed supersonic relative to our pace under oars. We finished the race, and with none of the other boats in sight, completed another full lap before another team got anywhere near the finish line.

Arriving back at the dock anticipating a hero’s welcome, we were disappointed to have to track down our friends and family, and then spend 15 minutes trying convince them that we had won the race handily! It took the rest of the summer to finish the painting, bright work, and rigging, but since the 1987 christening the Teal has spent many hours out on Lake Union and Lake Washington. We made some improvements to the seats and rigging, and decked over the hull from stem to mast as can be seen in the photo.

Long story short, we would be very interested in exhibiting this “graduate” of the Q & D program at this year’s festival, particularly if it could be sited somewhere near the build location. I was thinking it could be another small tribute to Dick Wagner that a couple of carpenter/contractors used one of the early Lake Union Wooden Boat Festivals as the place upon which to build both a friendship and a boat that each have spanned thirty years in and around Lake Union. Craig and I have always been “makers”, but for me it was stumbling across the Festival in 1986 and seeing the Quick & Daring contest in action that got me hooked on small wooden boats. 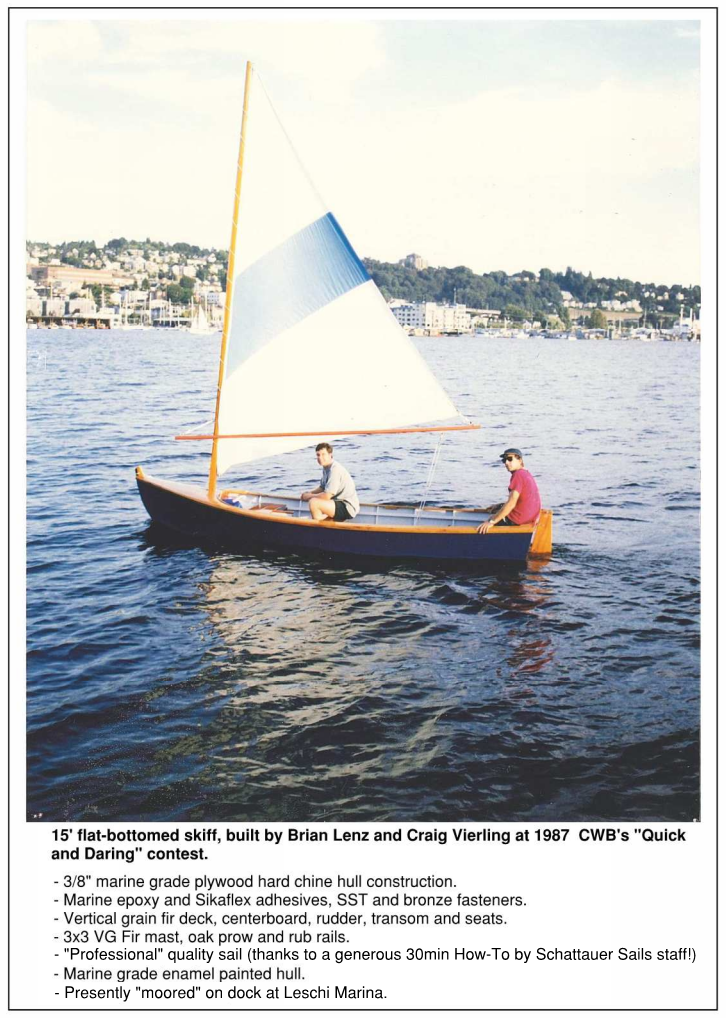 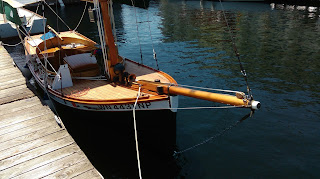 There were plenty of other boats at the show. One of my favorites was a jewel of a Poulsbo boat with a gaff rig. Unfortunately I don't know the builder, it was apparently a lifetime build for the owner's father and a few more years for the son after he passed.

The controls on this boat are all brass and there's a lot of brightwork, so it's a highly gentrified little fishing boat. 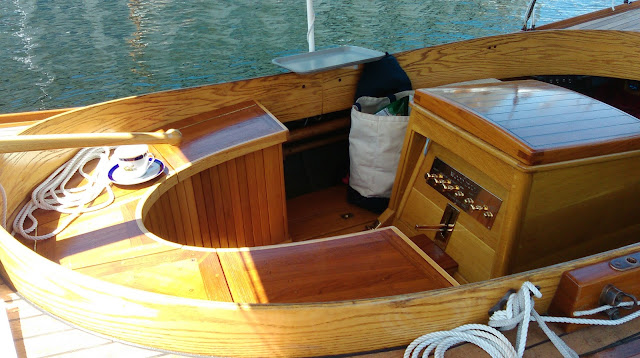 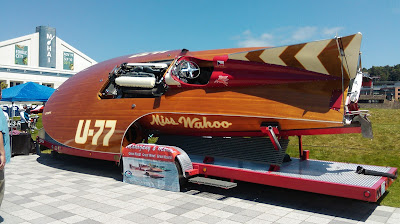 Lest anyone should think I only noticed boats rigged for sail, her's Miss Wahoo, Mira Slovak's old ride. It's an Allison-powered unlimited hydro, from before Merlins, Griffins, and later Lycoming turboprops stole the show. Seattle has a pretty illustrious history with the invention of the three-point unlimited hydro.

The most impressive human powered boat on display, at least to me, was the log canoe Saduuts carved a few years ago at the Center for Wooden Boats. It and he were on shore during the show, so here's a shot I took during Dick Wagner' memorial, with him paddling it. Saduuts is Haida, so I presume this is the appropriate style of canoe for the Haida.