The Outlaw John Locke is published!

Long-time followers of this blog will know that I've been working on a book about liberalism for several years. It is now available on Kindle. 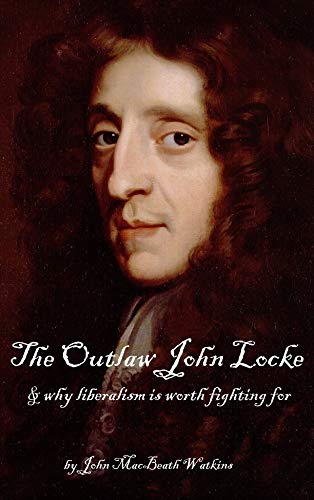 This is a book on political economy, about the most successful large Utopian experiment ever attempted, liberal democracy.

None of America's founding fathers would have called themselves capitalists, because capitalism was in its gestation while liberalism was already producing revolutions. The Ur text of capitalism, The Wealth of Nations, was published in 1776, and I would say that capitalism was not fully developed as an ideology until the marginal revolution of the 1870s, when it finally got a working value system. Liberalism became complete as an ideology with the publication of A Letter Concerning Toleration and Two Treatises of Government, both by John Locke, in 1689.

Locke fled England in 1683, a wanted man. He had been implicated in the Rye House Plot, a plan to kill King Charles II. He was unable to return to England safely until he could do so in the company of an invading army, during the Glorious Revolution of 1688.

We don't teach this much anymore, but Locke argued for the right to revolution, when a terrible leader could be removed by no other means, and apparently he practiced what he preached.

His ideas continue to change our society. In his day, many people were treated as property, not just slaves, but wives and children as well. He introduced the notion that we are all born owning ourselves, and cannot ever stop owning ourselves -- that's what 'inalienable' means, as in 'inalienable rights.' This idea upended such ancient institutions as slavery and marriage.

The notion that government should rule for the good of the people would have been an unfamiliar notion to leaders through most of human history. Kings served God (or Gods) with the blessing of whatever church they belonged to. Many parts of the world are still ruled by force, faith, and custom.

And while liberalism has held sway in much of the developed world, industrialization has changed the way we live, and with industrialization has come capitalism. It used to be that increasing wealth required controlling more resources, such as land, minerals, and labor. Under capitalism, the key to increasing wealth is wealth itself. Capitalism has shown it can function under dictatorships and kleptocracies, but it seems to produce the most wealth in liberal democracies. The relationship between the ideologies has always been an uneasy one, with democracy often acting as a check on capitalism.

These are some of the themes I explore in The Outlaw John Locke & why liberalism is worth fighting for.  I've priced it low -- $2.99 -- in hopes at least a few people will read it.