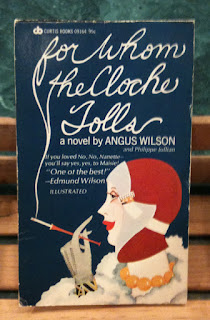 I have before me a book titled An Arsonist's Guide to Writer's Homes in New England, by Brock Clarke. The title of a book is an important aspect of marketing, which may have crossed Jincy Willett's mind when she titled her second book Winner of the National Book Award: A Novel of Fame, Honor, and Really Bad Weather. Her first book, Jenny and the Jaws of Life, got good reviews but sold less copies than expected, so she may be forgiven for a bit of self-promotion in titling her second. Besides, it really was about someone trying to win this award.

Bookseller magazine gives out an annual award for oddest title. The first winner, 1978's Proceedings of the Second International Workshop on Nude Mice, was the most unintentionally hilarious, though Bombproof Your Horse, the 2004 winner, comes close. Full list here.

There are, however, so many titles that can't make the list. Louis Althusser, perhaps the most depressing Marxist philosopher ever to strangle his wife, titled his autobiography The Future Lasts Forever (L'Avenir dure longtemps.) It's a better title for a science fiction anthology, but then he was probably more worried about self-redemption than book sales.

How to Avoid Huge Ships became part of the title of Joel Rickett's book about 'implausibly titled books,' although it is actually quite a good book to have if you operate a small yacht anywhere near the shipping lanes.

There is a bookstore not so far from mine, Glands of Destiny: First Edition Books, in Kenmore. The owner is a fan of odd titles. I believe it was he who purchased a copy of Scouts in Bondage from me. The name of the bookstore comes from the title of a book, of course.

I have at the moment in my window a paperback hinged at the top, titled for whom the Cloche Tolls, by Angus Wilson. I have no idea why the first two words aren't capitalized, and the title would make more sense to the modern reader if the cloche, a hat that looks like a bell, were still in fashion.  Of course, cloche is French for bell, but Wilson meant the hat.  As a bell.  Oh, hell, read the book.

Any favorites of your own? Do tell.
Email Post