Dumb criminals? The correlation with IQ

As a merchant, I have over the years formed the opinion that shoplifters as a class are dumb people trying to feel clever.  Not dumb in the strict sense of low IQ, but in the sense of not being able to accomplish much that they can be proud of.  Now, via the Marginal Revolution blog, we learn that there is, in fact, a link between low IQ and criminality.

Kevin Beaver and John Paul Wright, of Florida University and University of Cincinnati respectively, provide this abstract of their work:

"An impressive body of research has revealed that individual-level IQ scores are negatively associated with criminal and delinquent involvement. Recently, this line of research has been extended to show that state-level IQ scores are associated with state-level crime rates. The current study uses this literature as a springboard to examine the potential association between county-level IQ and county-level crime rates. Analysis of data drawn from the National Longitudinal Study of Adolescent Health revealed statistically significant and negative associations between county-level IQ and the property crime rate, the burglary rate, the larceny rate, the motor vehicle theft rate, the violent crime rate, the robbery rate, and the aggravated assault rate. Additional analyses revealed that these associations were not confounded by a measure of concentrated disadvantage that captures the effects of race, poverty, and other social disadvantages of the county. We discuss the implications of the results and note the limitations of the study."

Now, I find it interesting that state-level IQ rates and crime rates could differ as much as they do.  It could be that the link is poor nutrition in childhood or some other extraneous factor, but the other thing that occurs to me is that education differs from state to state, and to some extent any IQ test is an achievement test.  Stable homes, good schools and a culture that values learning are all factors that contribute to student achievement.

Or, if you are fond of the old post hoc ergo propter hoc fallacy, you could argue that proximity to Canada is the key.  The map below shows average IQ in various states, the brightest states showing the brightest colors. (By the way, there was a notorious hoax about the relative IQ of states that voted for Bush back in 2004. For a comparison between the real numbers and the hoax number, look here, it's the site I got this map from.):

Now, I can tell you that in my first 12 years of school, I went to 12 different schools.  Three of them were in Maine, and I'm quite certain that the Maine school system was the best I attended.  I went from that system to a middle school in Salem, Ore., where I was amazed that anybody learned anything, since the teachers seemed barely in control of the classrooms.  My niece, who is currently doing a practicum in Salem, tells me that the school I attended there is still considered one of the toughest assignments in the state.

But Oregon's schools are above average.  The average states are in blue.  One of the things I notice about the below average states, which are in purple and black, is that many of them are heavy in immigrants.  People taking an IQ test in English when that is not their native language will score lower than native speakers of the same intelligence.  In the early days of the Stanford-Binet IQ test, immigrant Eastern European Jews did badly on the test.  The same people, tested first as freshmen and tested again a couple years into their college careers, scored much higher the second time.  They had improved their English.  Now, we have people looking for genetic explanations for the high intelligence of Ashkenazi Jews.

But the issue of immigrants and crime is a confused one.  Most of the available data is flawed, and the most comprehensive study I've found, by the Center for Immigration Studies, concludes that it's impossible to tell whether immigrants have a higher crime rate.  Another possible correlation to IQ scores by state is spending on education.  In this map, the darkest spend the most:

And here we have a map showing the crime rate by state, with the worst, appropriately, being darker:

One possible link is wealth.  Better education leads to better wealth creation.  So how is wealth distributed?

The grey states are the wealthiest, then pink, then light blue, then dark blue, then green, then red.  California is fairly wealthy, yet North Dakota has lower crime and higher IQ.  Maybe the link is to wealth distribution? 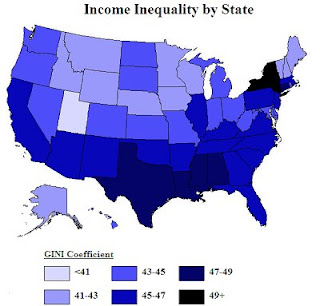 This correlation is not too bad.  If we go back to my original theory, that thieves are dumb people trying to feel clever, wouldn't they have greater self-esteem issues in areas with greater wealth disparities?  Texas and New York rank average in IQ but above average on the GINI coefficient and the crime rate.  Notice also that while California and Florida are in the same range for wealth distribution and California is actually lower in average IQ, Florida is poorer.  A richer state permits more scope for people to achieve with a given set of tools.

And what about illegal immigrants, the target of so much rhetoric?

None of these factors correlate perfectly, and in some ways it's hard to tell which way the causation runs, but it looks to me like better education means better wealth creation and a lower crime rate.  If the wealthy can see this is the case, they might be more willing to help pay for education of the children of the less wealthy.
Email Post
Labels: crime dumb criminals education IQ wealth distribution