Evil Twin: The story of the second Santa

In 1976 conservative pundit Jude Waninski proposed the theory of the two Santas, and for decades since, those who followed his advice have been hollowing out our country.

Wanninski was a writer for the Wall Street Journal. He was a believer in monetarism, and also in supply-side economics. The trouble was, his theory called for the government to be starved of funds, under the theory that this would lead to vast new investment in business and produce a rising tide that would drown us all...no, wait, good things were supposed to happen.

But cutting government spending, Wanninski observed, was not a good strategy for election. "Elect me, and I'll take away all your presents," struck him as a poor bit of messaging. Liberals were proposing to spend money on this and that, giving away tax-supported goodies like Santa. Telling people your would take away those goodies presented the Republican Party as Scrooge, who would never be as popular as Santa.

So he proposed the second Santa. This Santa, instead of promising to spend money on constituents, would promise to cut their taxes. By becoming the second Santa, the Republicans would be elected and all would be right with the world.

But wait, isn't this second Santa really a Scrooge, offering to cut your taxes but planning to take away the goodies? No no no no no no. The second Santa would never have to say he would cut services, because the Laffer Curve showed that when you cut taxes, revenues would actually increase!

Except that when they put the plan into action, the revenues never did increase, and the economic results were unspectacular. In fact, they even thought they had set a trap for Bill Clinton when they shut down the government claiming we needed to balance the budget now now now now now! Never mind that Ronald Reagan had vastly increased the debt, or that when George Herbert Walker Bush raised taxes to try and reduce the debt, many Republicans responded by sitting on their hands when he tried to get them to vote for his re-election.

Newt Gingrich and his merry gang thought the tax increase would be terribly unpopular, and would ruin the economy, allowing a Republican to take over the White House and make all right with the world again.

But something went wrong. Clinton managed to reduce the number of people on the federal payroll and raise taxes while getting government to do what people wanted it to do, and the economy boomed. Apparently, raising taxes doesn't ruin the economy if done in moderation, and trying to make government work better can pay off as well.

And what of supply-side economics? It's an odd turn of phrase, isn't it. We've heard so much propaganda on the topic that we always think that means the discredited Laffer Curve, and cutting taxes and claiming one is going to cut spending (though they never do.)

But is that all there is to the supply side of economics? Dwight Eisenhower, a general before he was a president, knew logistics. He also knew what a mess the logistics of the American economy were. In 1919, he accompanied the Transcontinental Motor Convoy from Washington, D.C. to the Presidio in San Francisco, a trip accomplished at an average speed of 5.65 mph over a period of 56 days. In the process, the men in the convoy repaired 44 wooden bridges and traveled most of the distance on unpaved roads.

Eisenhower said he thought the Interstate Highway Act of 1956 was his greatest accomplishment as president. It's an accomplishment no other president would have boasted of, because none of the others have understood as well as Eisenhower how important roads are.

The demand side of the economics of roads hadn't produced a good interstate highway system, even with businessmen, bicyclists and motorists constantly lobbying for them. But Eisenhower knew that if he supplied the country with a fine road system, the movement of goods and people made possible by that system would stimulate the economy beyond all expectation.

And not coincidentally, the period from 1956, when the Interstate Highway Act was passed, and the early 1970s, when most of it had been built, were a period of rapid economic growth for the country.

Michael Mandel of the Progressive Policy Institute has provided us with a graphic representation of what's happened since the main period of highway construction ended: 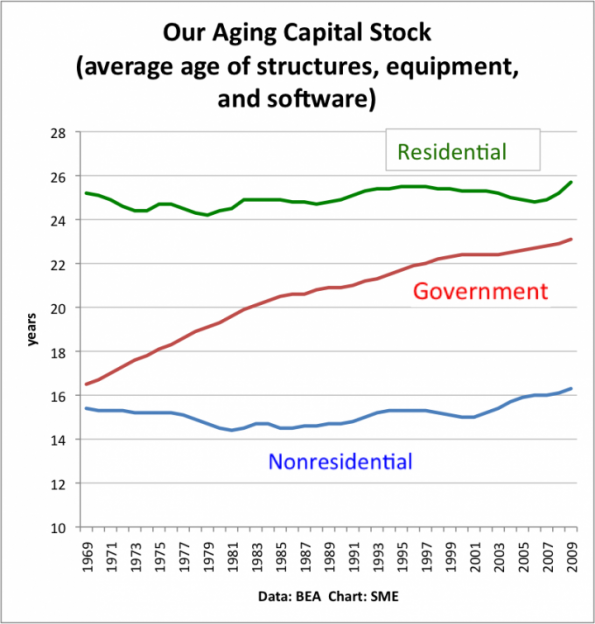 While that's been happening, we've been playing around with the second Santa, waiting for that tide that will lift all boats. We're still on the rocks.

Eisenhower, interestingly enough, did not want to lower the top marginal tax rate from 90 percent. We were paying down the national debt as a percentage of GDP and we had uses for the tax money, providing the roads industry needed and educating the workers who would do the jobs. He'd been in charge of making sure the Army had enough men, enough machines, could get what was needed from point A to point B, and he'd seen what it took to train men well enough to be useful in a great enterprise.

John Kennedy, whose father and family friends were no doubt tired of paying such high taxes, lowered the top marginal rate to 70%. Who knows, that may be where the Laffer Curve actually applies. After all, there's a study that shows that's the rate that collects the most money from the rich.

But the business of cutting the top rate to its current level of 35% was essentially a fraud. Laffer never did the work to find out where the increase in marginal rates actually could make taxes collected fall, he simply asserted that it was a lower rate than the current one, and has continued to make that assertion no matter what the current rate is.

In the meantime, the real supply side of economics, the provision of the means and the skilled workers needed to build the economy, has simply been neglected. The second Santa has taken it away.

And did the second Santa achieve his goal? Did he starve government?

Not really. George W. Bush, who lowered taxes repeatedly during his time in the White House, raised the number of people working for the government by 35%, as we discussed in this post. The whole thing turned out to be a scam.

The problem is, people like Eisenhower weren't working a scam. They expected the American people to pay for what they got, and they promised to spend the peoples' money wisely. Rather than playing Santa, they were advising the people that here was an investment opportunity that could make the country richer, how about it, are you in? And if the people weren't, the project didn't get built. Meanwhile, the national debt did this: That's right, it was well under control until the Second Santa got his hands on the checkbook with the election of Ronald Reagan to the presidency in 1980 (Wanninski was part of his brain trust.) Those tax-and-spend liberals were, it turned out, pay-as-you-go liberals.

The damage has been done, and will take many years to undo. But first, we've got to keep the second Santa from coming down that chimney. Give the first some milk and cookies, then build a fire.
Email Post