The Shareholder Value Myth and the tax code

One of the things a bookseller quickly learns is that the fashion in business books changes about as rapidly as the fashion in diet books. Few become classics, few have lasting value.

But some ideas spread though the system and change it. The ideas in The Shareholder Value Myth deserve to spread, but I'm pessimistic about them actually doing so. If you think about the ideas in it, and look at what valorizing shareholder value has done to incentives, you can see how this philosophy has impoverished society as a whole, employees below the top rank, and corporations themselves.

The book, by Lynn Stout, a professor at the Cornell University School of Law, points out that the primacy of shareholder value as a measure of corporate success is a relatively new phenomenon, and does not seem to have worked out terribly well. 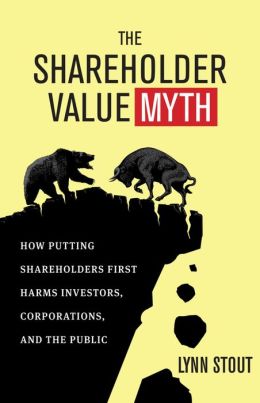 Stout points out that legally, directors owe their loyalty to the corporation, and they must balance the interests of stakeholders such as shareholders, bond holders, creditors, employees, customers, suppliers, and society at large. If you look at banks, for example, their financing does not come mainly from the shareholders. Most of it comes from bond holders and depositors. Yet the recent bailout mainly looked after the interests of the shareholders.

She traces the idea of the primacy of shareholder value to academia, particularly the University of Chicago, that home of conservative ideas to remake society root and branch. The idea was that corporations were getting beat by foreign competition because they weren't paying close enough attention to the interests of those who owned their stock.

Essentially, this meant corporations were coddling their employees and being entirely too responsive to society at large. Never mind that those foreign corporations beating them were not bastions of shareholder value, the ideas percolating at the University of Chicago followed a definite ideology, worshiping the greed of the individual as the force powering the economy.

As we explained in this post, corporations began making gains by breaking implicit contracts with their employees. The hostile takeover artists of the 1980s were in theory taking over undervalued companies, then streamlining them and making them more valuable. However, the fact that a number of these ventures ended in bankruptcy of the company involved (as did many of the private equity takeovers engineered by Mitt Romney's old company, Bain Capital) seemed to undermine that view. In fact, it looked more like the takeovers had often taken a stable, modestly profitable company, pulled out a lot of cash, then left them crippled. Of course, in other cases, things worked out better, but people do notice bad news.

Now, a corporation is an odd creature, a person who is a legal fiction, and unlike any other person in our society, it is owned. For most people, their obligations are first to themselves, then to those they owe an obligation to, such as creditors, suppliers, loyal employees, etc. A person who is a real person, as opposed to a legal fiction, has a self-narrating metaphorical space in his or her head that is its core identity, telling them what they should do. For a corporation, that space is filled by top management. Directors are meant to act as a sort of conscience, a role in which they all too often fail.

In economics, the owner-agent problem is notoriously difficult. If I hire someone to manage my affairs, there is every reason to fear that the manager will manage them not to my benefit but to theirs. And in corporations, that seems to be what usually happens.

So consider how the motivations for our managers have changed. When we had a 90 percent tax bracket, as we explored in this post, there wasn't much point in giving executives huge raises, because the government would get most of it. Instead, we gave them perks like use of a corporate jet and the executive washroom. When we lowered the tax rate for the most fortunate among us to 35 percent, this radically changed the incentives, and the new philosophy on shareholder value provided a logical rationale for handing over huge sums as stock options.

What this did was give top management a hell of a lot more money, especially if they could squeeze someone else -- employees, suppliers, even customers -- provided they could manipulate short-term stock values in accordance with their options. And if they ruined the company, they got the golden parachute at a 35 percent tax rate, or less if it was structured as capital gains.

I believe this change in incentives, more than the tax rates themselves, reshaped our society into a less egalitarian and crueler one. And it's been a disaster for publicly traded companies. In 1998, there were 7,562 of them, now there are 3,678. Companies are going private, in part because pursuing shareholder value makes if very difficult to build a healthy company.

And part of the reason for that is, many shareholders are not long-term stakeholders. The averages amount of time a stock is held before it is traded in the United states is half a minute.

You read that right, 30 seconds, according to Michael Hudson, a former Wall Street economist.

"Most trades are computerized. Most trades are short-term. The average foreign currency investment lasts – it's up now to 30 seconds, up from 28 seconds last month. The financial sector is short term, yet they talk as if they're long term."

That's because about 70 percent of stock trades are done by computers using algorithms to engage in high-speed trading.

Building a healthy company usually involves a time horizon further in the future than 30 seconds.

The notion that the stock market provides a clear and stable value for companies took a big hit with the bursting of the tech bubble, and another with the 2008 financial crisis. And with trades happening faster than you can make bets with a Blackjack dealer, why should we believe that myth?

Yet, the old idea of shareholder value still has momentum. One of the responses to the financial crisis has been to try to make the big banks more responsive to shareholders. Who do you think was giving management incentives to Washington Mutual managers for their bank's rapid and reckless growth? Shareholders who figured they could get out if things went sour, and trading algorithms that rewarded their short-term focus. The result? A bankrupt company, its assets purchased by a healthier company, those stuck holding the stock at the end wiped out.

Not that going private is always the solution. Look at Bain Capital's record. Private equity firms have shown that they can screw things up just as much by focusing on the interests of their investors to the exclusion of all other stakeholders. But at least their investors are in it for more than 30 seconds worth of commitment.

The top marginal rate has gone up only slightly, to less than 40 percent. The incentives are still pretty much the same, so it's hard to see what constituency there is for Ms. Stout's ideas. Shareholders with a 30-second time horizon aren't going to care about the long-term health of the company, managers have the same incentives as before, and the real constituency for good government is always small compared to moneyed interests.

And the constituency for good corporate governance is even smaller. Only a broad philosophical shift in the country, and an understanding of where we went wrong, will be capable of changing the incentive structure of companies. The stakeholder that matters there is society at large, about the last group the worshipers of shareholder value want companies to care about.
Email Post
Labels: business corporate governance politics rethinking liberalism taxes