The past is a foreign country

"The past is a foreign country: they do things differently there," wrote L.P. Hartly. It is the first sentence in his novel The Go-Between, published in 1953. 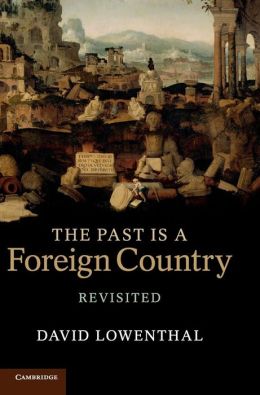 I noticed one of my favorite history reference books is going to be re-released in a few months in a revised edition: The Past Is a Foreign Country by David Lowenthal, published in 1999 by Cambridge University Press 0521294800.

I was not a history major in college, but I enjoy reading history books. I found this book to be valuable as a reference when reading other historians or archeologists, as a reference and a guide to 'the past' as we know it.

This sizable history book makes a great case that we misunderstand and misinterpret  the past, due to our prejudices and lack of complete knowledge, which is lost to us forever.
The author distinguishes between the past that is utterly lost to us, and 'the past' we recreate from our own prejudices to suit our own needs, as we examine the buildings, landscapes, and books left behind. When we try to recreate the past, either in history books, or interpenetration of ancient cultures, or by 'restoring' buildings built a few decades or a few Milllena ago, we usually get major details quite wrong, or 'interpret' cultures as being 'decadent' or 'advanced' according to our prejudices at the time.
This book is encyclopedic in scope, and is crammed with opinionated information .It is good first book for the amateur interested in the field of both history, and memory, and the flaws in both.
The first thing the author points out is that perception of 'the past' as a different sort of time came about in West in the Enlightenment in the 18th century , when intellectuals began to differentiate the present from the past, and to see it as a different sort of place; that real changes had occurred.
The book seizes the reader in the first chapter with a discussion of the reconstruction of the Parthenon in the 19th century,and all the egregious errors that were made at that time that are clear seen as wrong now, as we know more about the Classical Athenians.
I was excited when I saw this book was going to be issued, for the practical reason that the older edition will drop in price for the casual reader,  (It is now well over $10, and scarce locally used) and that the newer edition will have expanded ideas and new insights from the author. I liked this book so much that 12 years ago, I bought 5 copies new to give as presents to  everyone in my family who liked to read history for pleasure.
Either by picking up the new edition, or by picking up a (soon to be cheaper) copy of the old one, this book would make a fine present for a history buff, or for someones' permanent history library.
Another book not to be missed is Pronouncing Shakespeare - the Globe Experiment by David Crystal, also published in 1999. It is an account of the production of a performance of the play Twelfth Night, done in the original dialect of the early 17th century.

This book is exciting;  like The Past is a Foreign Country it discusses how difficult it is to reconstruct just what that London dialect of the time was like.

When we read Shakespeare's works aloud, no modern performer, either English or American sound like actors from this time. The accent  of the early 17th century seems to sound at a little bit like a West Virginian American accent, which is linguistically directly descended from early colonists from England. though an Australian who heard the production thought it sounded 'cod-Irish with some 'west country' mixed in, which may be much the same thing.   This dialect of Shakespeare's and his contemporaries is separated from us not be geographic distance, but time, and is very hard for untrained ears to understand.

This book makes the rediscovery and reconstruction of this accent exciting; as many wish to hear Shakespeare as he wrote it, in the precise dialect of the time. This book is in the form of a journal of the production, with thie linguistic part lucidly written for the beginner.
Certain passages make more 'sense' in the original dialect, the ryming and puns are more lucid.

For example, Shakespeare in the 17th gets a little dirty in  the play As You Like It, because 'hour' used be pronounced to sound like 'whore'.. The pronunciation has changed, and the pun is lost completely, leaving the reader to wonder what the cause was for laughter, or what the "tale" was that hung.


(the fool)
Says very wisely, 'It is ten o'clock:
Thus we may see,' quoth he, 'how the world wags:
'Tis but an hour ago since it was nine,
And after one hour more 'twill be eleven;
And so, from hour to hour, we ripe and ripe,
And then, from hour to hour, we rot and rot;
And thereby hangs a tale.' When I did hear
The motley fool thus moral on the time,
My lungs began to crow like chanticleer,
That fools should be so deep-contemplative,
And I did laugh sans intermission.