I've been thinking about what would be needed to make sailing more popular, and I think one problem is the perception of it being expensive. What we need is a design that can be built for less than $1,500 including the rig with a professionally made sail.

My approach would be to design it around the Laser practice sail, which costs around $150, about a third of what a sail this size normally costs. The boat would be stitch and glue, so it could be built quickly with a minimum of tools and skill. The panels should require no more than one scarf, which means the boat will be around 15 ft. I'd give it a full-length cockpit with a deck sloped to encourage water to leave through the stern.

Here's what I'm got so far: 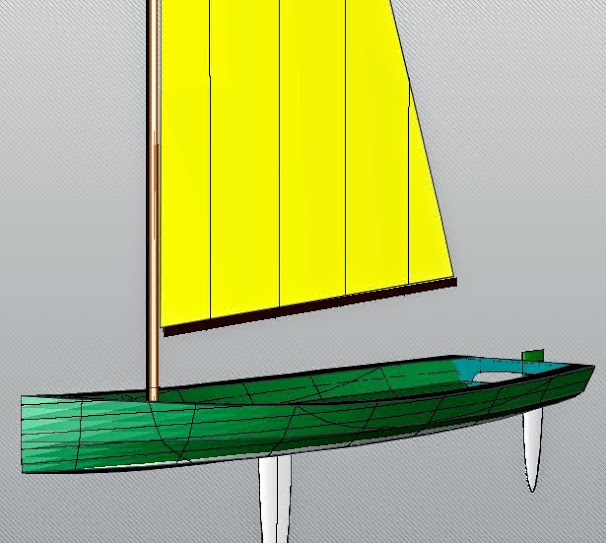 The main deck follows the line of the upper chine. At the top of the gunwales, there would be a narrow deck to make the boat more comfortable to hike on.

Here's what the lines would look like, nice and simple so the water doesn't get confused:

With semi-skilled volunteer labor and somebody's garage, it should be possible to build four or five of these for the price of a new Laser. They wouldn't be quite as fast as a Laser, but they'd be as fast as each other.

I've rethought the rudder since I made the first illustration, substituting a lower-aspect version with more area, so that it will really crank the stern around when put over with authority. Built in 1/4 inch plywood, the boat should be able to carry four pre-teens, three slender teens, a trim couple, or one big galoot. The idea is a boat that could be built for about 1,200 in materials, including a professionally made sail, so that a yacht club, scout troop, or non-profit, could build about four boats for the cost of one new Laser. It won't be quite as fast as the Laser, but should keep the crew drier and allow for a more social sailing experience. 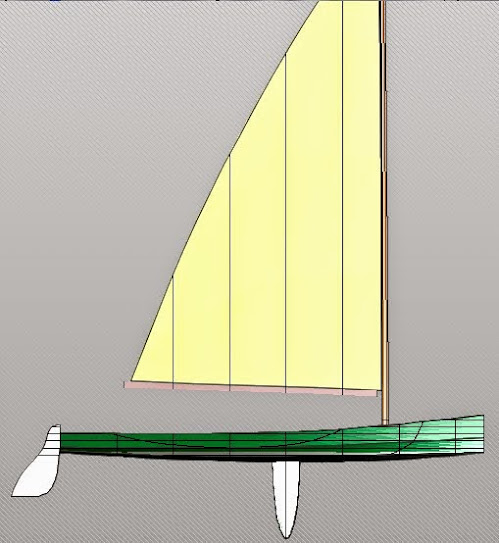