Liberalism and capitalism, freedom and markets

Successful industrialization require capitalism, not democracy. F.A. Hayek said in The Road to Serfdom that “...the system of private property is the most important guarantee of freedom. It is only because the control of the means of production is divided among many people acting independently that we as individuals can decide what to do with ourselves.”

And yet, business interests supported the totalitarian regimes of Adolf Hitler and Benito Mussolini. The German mittelstadt, the medium-sized companies that form the backbone of German industry, continued to flourish in this environment. Capitalism has managed to thrive in a number of nations that have been ruled by dictators. Capitalism no more guarantees liberal freedoms than any other market-oriented economic system has throughout history.
But liberalism has provided a more welcoming environment to the creative energies that can be released by capitalism than dictatorships, and in any case, dictatorships tend to produce rent-seeking by officials whose power cannot be questioned. The resulting corruption interferes with commerce, as those with power siphon off wealth.

Hayek had it backwards. Property is not a guarantor of freedom, but freedom is a guarantor of just property claims, because to have freedom, you must have the rule of law, rather than will. That was the point of social contract theory; you could not exercise your freedom during the war of each against all. After all, as Hobbes observed:

“ ...wherein men live without other security, than what their own strength, and their own invention shall furnish them withall. In such condition, there is no place for Industry; because the fruit thereof is uncertain; and consequently no Culture of the Earth; no Navigation, nor use of the commodities that may be imported by Sea; no commodious Building; no Instruments of moving, and removing such things as require much force; no Knowledge of the face of the Earth; no account of Time; no Arts; no Letters; no Society; and which is worst of all, continuall feare, and danger of violent death; And the life of man, solitary, poore, nasty, brutish, and short.”

Rousseau defined freedom as being subject to a law of your own making, that is, a socially agreed upon set of rules in which those subject to the law have a say in the law.

Totalitarian states do not consider the state to be serving the individual citizen. They consider themselves, instead, to be serving groups. In the case of Marxist states, the state is meant to represent the victory of the working class, therefore the imposition of a classless society. In the case of fascist states, the individual is considered weak unless a member of the state. Consider the flag of the Partito Nazionale Fascista, Mussolini's national Fascist party. It is a black field with on it a fasci, a bundle of sticks with an ax head sticking out, the metaphor being that the individual rods are weak, but together they are strong. 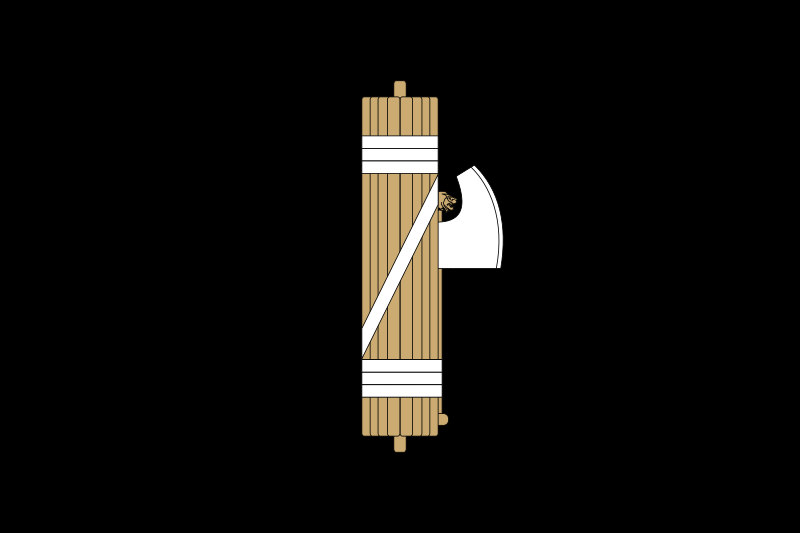 This represents the unity of the people. Mussolini believed that nationalism had replaced class as the cause that really mattered to the common man. And because the nation was what mattered, individual rights did not. And fascist sates had some support from convention, because their biological determinism caused them to think that people should remain in the status they were born to. If your father was a laborer, you were genetically fit to be a laborer. Some were born to lead, some were born to follow. At each level, the leader demanded complete obedience from those below, and gave complete obedience to those above. The people were at one with the state, which was led by one born to lead. There was no need to consult the individual, because the individual was nothing except as part of the state.


Fascism is for the only liberty which can be a serious thing, the liberty of the state and of the individual in the state. Therefore for the fascist, everything is in the state, and no human or spiritual thing exists, or has any sort of value, outside the state. In this sense fascism is totalitarian, and the fascist state which is the synthesis and unity of every value, interprets, develops and strengthens the entire life of the people.
—Benito Mussolini, Giovanni Gentile, Doctrine of Fascism (1932)

Totalitarian states were not democratic because they did not value democracy. They could accommodate capitalism if, as with the fascists, their ideology did not have a problem with private property and markets.

But the fascists failed for the same reason Napoleon did. They depended for their legitimacy on nationalism, and stirring up the people against the nation's neighbors. This in the end called for war, and if you keep fighting long enough, you will eventually lose.

Marxism, by contrast, claimed to represent the worker against the oppressive capitalist. One problem with Marxism was that Marx himself was rather vague about how the withering away of the state would happen. In fact, once you have removed religion and property as institutions, what remains must take on their functions, and that's what the state did. Another problem was that Marx did not produce a workable system of value. It is all very well to say that labor creates value, but how do we know that a person is doing labor of value? Liberalism's subjective version of value tells us that it is dependent on the need and judgment of another. Marx did not show how society would reward labor on what needed doing in contrast to labor doing something no one cared about or even doing something destructive.

As a result, it produced the Trabant, a car produced in East Germany before the fall of Communism, which was a value-subtracted product. That is, the metal, plastic, rubber, labor, etc. that went into the product was worth more than the product itself.

"With a view to corporate takeover, Volkswagen AG sent a Herr Heuss to Zwickau to find out how the Trabants (relatively cheap East German cars) were made there. He emerged shocked from the huge plant, babbling “My God. The Trabant operation was value-subtracting: valuable material, labor, and capital inputs went in at one end; shabby Trabies came out at the other, their bodies made from compacted trash. The final output was worth less than the sum of the inputs. What was not fully understood at the time was that East Germany’s whole economy was value-subtracting and cost-unconscious.”


Communism produced somewhat more stable governments than fascism, but worse economic results. And both produced atrocities, from the German Holocaust to the killing fields of Cambodia.


Liberalism, because it is democratic, is more flexible. Leaders who fail can be cast aside without violence. If the system is not producing just outcomes, the system can be changed.


There seems to be confusion on the right as to the difference between social democracy and socialism. Social Democrats are a group of liberals who believe in private property and markets, but want a strong social insurance program to soften the consequences of capitalism. Communism is a kind of socialism that regards it as important that society, usually in the form of the state, should own the means of production. (Marx proposed eliminating property entirely, but since property is the rules, obligations, and rights about how people use objects, this is impossible, as long as people use objects. This basic failure to understand the nature of property is part of the reason for the failure of Marxism.)


Social Democrats, then, are those who wish to preserve capitalism through forms of social insurance that make the system sufficiently just in its outcomes to avoid social unrest. Both fascists and Communists considered them enemies, and suppressed them, in part because they try to achieve their aims by democratic means.

Fabian socialists tried a different approach, trying to institute the social ownership of the means of production by democratic means over a long period of time. When state-owned industries in Britain proved economically unworkable, their project was ended by democratic means.

Some will say that laissez faire capitalism is an alternative, but I doubt this has ever really been tried. We were still in a mercantilist system when the Grange movement started advocating for anti-trust laws, so we went from the state supporting industry under mercantilism to regulated business without a real laissez faire moment between. In fact, industry still depends upon state aid in matters of credit and infrastructure. The closest we came to laissez faire capitalism was the Gilded Age of the 1880 and 1890s, which produced enough unrest to produce the labor movement and the Grange movement.

Laissez faire capitalism is close to the ideal of libertarianism, but there was substantial government interference in contracts between labor and industry, if favor of industry. Like Marxism, the purist ideal of libertarianism would be the withering away of the state, and this is no more practical than than the Marxist ideal of communism without a state. Even most libertarians understand that the state is needed to guarantee property rights.

The problem they face is that markets are as much a human invention as governments, and it's difficult to see why, therefore, markets should be privileged.over other institutions.