A cartopper for cold climates

The Sunfish is about the ideal cartopper for warm waters. When I was living on Okinawa, I sailed quite a bit on its ancestor, the Sailfish, and found it quite pleasant in warm water.

However, that's a boat you'd sail in a dry suit in Puget Sound if you wanted to avoid hypothermia. I like the rig, and the fact that you can raise it or drop it while out on the water, and besides, Intensity Sails can provide a Sunfish "practice sail" for about $140. That's a major reduction in the cost of a boat, compared to the Snipe mainsail I bought a few years back for $800, which has only a little more sail area.

So, what's needed is a boat that can throw less spray and have higher freeboard to keep the crew dry.

Here's what I propose: 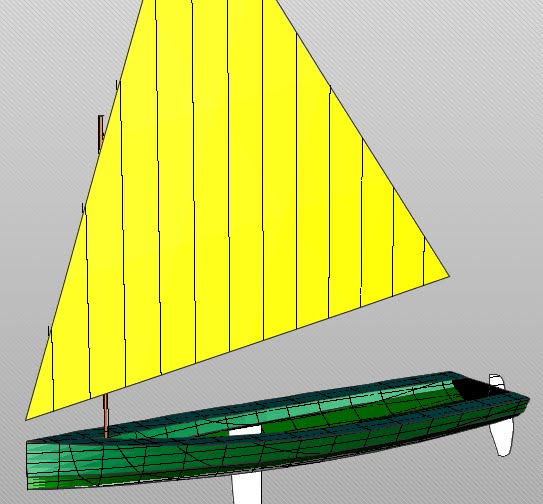 Compared to the Sunfish, the bow is designed to cut through the chop rather than rise and slam down. The wide transom will help keep the boat in that mode. With an overall beam of four feet and a waterline beam of three feet, it should be a little faster in light winds, such as those that prevail in the Pacific Northwest. She might not plane in quite such light winds as the Sunfish, but I think on balance, she'd be about the same speed and drier.

Here are the lines, nothing special, just panels that develop very well and a shape that won't confuse the water: 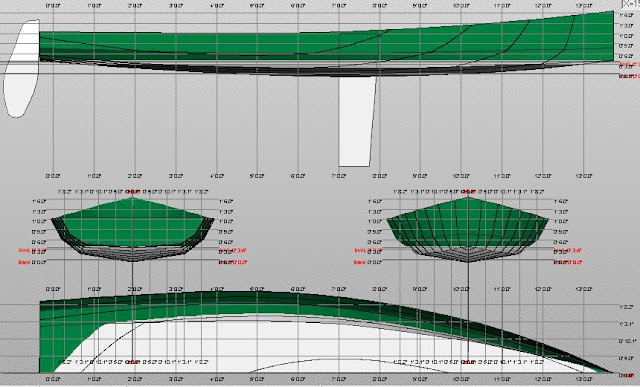 I think a sufficiently skilled person could build this boat in a long weekend, perhaps with a little help, with a materials cost under $600, if you stuck with wooden spars. Build it in 4 mm okume plywood, it should come in at about 100 lb. unless you go with a lot more deck than I've shown. And you might want to, if you prefer a self-rescuing boat to one that relies on buoyancy bags and needs to be bailed after a capsize. The hull itself you could build with three sheets of plywood, but with deck, daggerboard case, daggerboard, and rudder, you're going to need a bit more lumber than that.

With a low center of effort and easily driven hull, this should be a pleasant daysailer for one or two people, and manageable for carrying on a car with a roof rack. With a boat that you might launch off a beach, you either need a kick-up rudder and centerboard, or a rig you can raise or lower with the board and rudder already down. I've gone with the latter approach, since it seems simpler and results in a lighter boat. It should also paddle or row without too much effort.
Email Post
Labels: boat building cartopper homebuilt boats sailing Sunfish