Eclipse, as seen through trees

Seattle did not have a total eclipse. We were at 91.9 percent, which was enough to give us some spooky light, a drop in temperature, and a bit of an eclipse wind.

I didn't buy the glasses or anything, just relied on standing by a deciduous tree casting a shadow on bare, level ground, in this case the sidewalk. The gaps between the leaves act as pinhole cameras. 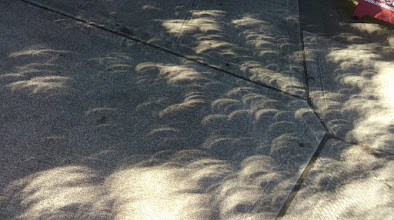 After the eclipse came as close to totality as Seattle would see, I drove to work, watching the progress of the moon over the sun in the images case by trees along the way. When I arrived in Ballard, the eclipse was almost over, and the images cast on the sidewalk there were becoming less sharp-edged. 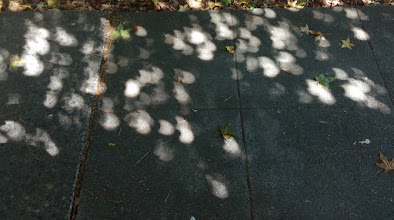 A kind soul allowed me to look through his eclipse glasses, but I didn't get an image of that.

When I got to work, Beau didn't greet me as I came in. I found him hiding in one of the aisles, looking a little shaken. Cats don't get a warning for these things.

I used to race against a 6 meter sailboat that was named Eclipse, and had an image of the sun painted on the waterline. As it heeled, it eclipsed that sun image, but not this way: