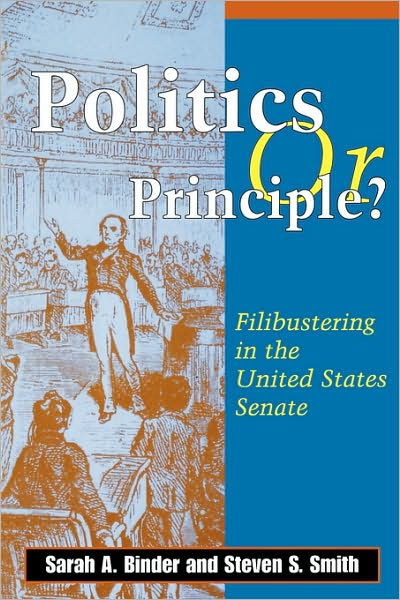 This came out in 1996, and no doubt could use some updating, I'm sure, but it is extremely timely, especially with Sen. Reid talking about reforming the filibuster.

Ezra Klein recently interviewed one of the authors.

To tempt you to read it, here's Klein's quote from Sarah Binder:

"In 1805, Aaron Burr has just killed Alexander Hamilton. He comes back to the Senate and gives his farewell address. Burr basically says that you are a great body. You are conscientious and wise, you do not give in to the whims of passion. But your rules are a mess. And he goes through the rulebook pointing out duplicates and things that are unclear."

"Among his suggestions was to drop the previous question motion. And they pretty much just take Burr's advice. And once it's gone, it takes some time for leaders to realize that they can't cut off debate anymore. But the striking part to me was that we say the Senate developed the filibuster to protect minorities and the right to debate. That's hogwash! It's a mistake. Believe me, I would've loved to find the smoking gun where the Senate decides to create a deliberative body. But it takes years before anyone figures out that the filibuster has just been created."