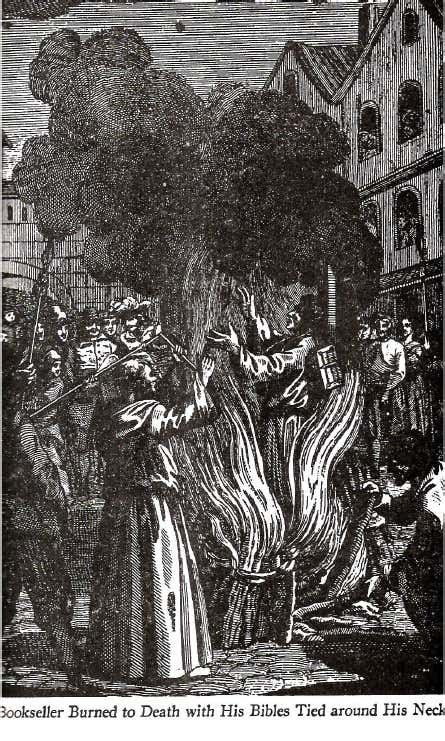 I have a copy of Foxe's Christian Martyrs of the World in which there is a woodcut of a bookseller being burned with his books tied around his neck. Why would anyone do such a thing?

As it happens, it was entirely logical. Eric Hoffer once observed that every religion starts as a great cause, becomes a business, and finally turns into a racket. In that final phase, it doesn't do to let the yokels know what the sacred texts actually say. They might object that the actions of the priests and kings do not accord with the Word.

The authorities had enough trouble suppressing John Wycliffe's translation of the bible into English, which had to be copied by hand, an enterprise that took about ten months for an educated scribe. Wycliffe died of natural causes in 1384, but his bones were dug up and burned so that he could not rise on Resurrection Day, and the English Bible was banned. In spite of this, groups of people gathered in secret to hear the banned text read, often at night in desolate places where they hoped not to be discovered, knowing neighbor had been set to spy on neighbor. They were called Lollards, after a Dutch word that means mutterer. People were put to death for reading the Bible in English to their neighbors.

William Tyndale did a better translation, going back to the Hebrew and Greek (Wycliffe had translated the Vulgate Bible,) and translating the New Testament into fairly modern English (his translation is the basis for much of the King James Bible.) He first tried to print in Holland, but fled just before the printer's shop was raided, fled to Worms, where he was able to print all he could afford. He printed them in quantity, first in the usual format, then in a smaller format for easier concealment and smuggling. They started to arrive in England hidden in the bottoms of boxes, in bolts of fabric, in sacks of flour. The Bishop of London decided to buy up all the copies of the book in existence, the entire press run waiting to be smuggled, and burn them. Tyndale used the money to pay off his debts and print another edition with some corrections he had contemplated.

In 1536 Tyndale was captured by agents of Henry VIII and put to death, first strangled, then his bones burned to prevent his resurrection.

But printed books were not so easily suppressed. When Henry VIII had differences with the church, he decided to have his own translation done, printed, and placed in churches, where they could be chained to the altar and read to the people by the sort of reliable priests he hadn't already killed. How well this worked my be judged by the fact that England was to have a civil war a few generations later in which the king was found guilty of treason and put to death.

Now the Great Firewall of China attempts to chain the word again. Will it work this time? Perhaps long enough for those making this choice to retire. Printing made it hard to suppress speech because it produced so many copies at such a low price. How will the electronic word shape us? It produces copies at greater speed and lower price, but it also can hunt down the source of subversive speech in a way the printing press never could. We cannot know how this experiment will end. In more open societies, it is disruptive as well.

It removes bars to entry in publishing news and opinions and at the same time disaggregates the package that is the newspaper, stories linked on other sites, classifieds moving to Craig's List. That package was not just news, it was also the ads and subscriptions that paid for gathering the news. Will the disaggregated newspaper employ as many people to gather the news? Unlikely. The news media in America has lost about 25% of its journalists in the last ten years as the money to support them has disappeared. In addition to more opinion, the press of the future will do less reporting

The new technology will remove those local monopolies that newspapers tended to have in the late 20th century, when few cities had more than one newspaper. Such newspapers had to defend their objectivity to present themselves as honest brokers of the truth, else someone might wish to start another paper in town. In a fragmented media, they will instead compete for niches in the marketplace. Their point of view will be their stock in trade, their opinions will attract their audiences. We may see the return of the poison pen, of a cacophony competing voices instead of stately grey ladies like the New York Times. It is changing our politics, though it's hard to tell how much of the change is caused by the new way of publishing. Certainly a public served by a press unconcerned with objectivity or balance will tend to arouse the passions of their public more readily than those careful old newspapers that sought to be viewed as neutral.

We already see how more channels of television news has made neutrality less salable. This too will change, as networks become faster and video moves on to the net. The more fragmented the press, the smaller a unit of the public each unit of the press will compete for, and those smaller units will be defined by a smaller world view. How will our world change when people don't have to know the same facts, but can instead take in only what they wish to hear?

It may be a world in which a boring topic like how our health insurance market is structured becomes a part of a culture war, with bricks thrown through windows and congressmen threatened with death. Or perhaps sweet reason will triumph, and all will be well. And blue monkeys will fly out my butt.

More on publishing in the twilight of the printed word: