Journey to a text 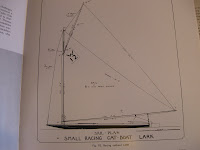 Book collectors are subject to strange passions and obsessions. One of mine happens to be the history of sailing craft. I thought I would tell how this obsession brought me to spend as much for a few pages as most people pay for an entire book. And we must consider, the median number of books read by adult Americans in a year is two. So I blew half the median American budget for a year on a few pages copied from a defunct magazine.

I suppose it all started with my ill-starred decision to learn the alphabet, but not being James Michner, I'll start with a more proximate cause.

I often waste my time with others of my ilk on the WoodenBoat forum. There I angered an Englishman who rejoices in the name Andrew Craig-Bennett by suggesting that Uffa Fox, the most renowned small-boat designer of all time, didn't invent the planing dinghy. Fox won the Prince of Wales Cup in Avenger, a 14-foot sailing dinghy, in 1928, introducing the planing dinghy to England. He had worked on aircraft designed to take off from the water, and used some of this knowledge in designing Avenger. The boat won 52 races in 57 starts. You have to be a complete geek about small-boat sailing to regard this as earth-shattering, so I do.

Now, I knew that the inland scows in America were planing in the late 19th century, the basic shape remaining roughly the same from the 1890s to the present day. Some of the classes still sailing were organized in 1901 and 1903. The difficulty is that the type is little known outside the US (although for a time in the late 1890s, they terrorized a lagoon in New Zealand until an earthquake destroyed the lagoon.) And finding lines for such a vessel to show to my interlocutors, who by this time included an English naval architect, a New Zealand small-boat designer of some repute, some Aussies and a number of Americans and Canadians, proved more difficult than expected.

I ran across the illustration at the left in a book called The Golden Age of Yachting, by L. Francis Herreshoff (it was the lines of a design by his father that had set me off in the first place.) It was the sail plan for a racing scow designed by Charles G. Davis, the design editor for Rudder magazine, a publication then quite new. The design ran in 1898 under the headline, "How to Build a $50 racer," serialized in three issues, and proved so popular that it radically boosted the circulation of the magazine. In 1899 Rudder published it as a hard cover book, so I thought, being in the book business myself, perhaps I could acquire a copy. Unfortunately, the cheapest copy available was $85, and being in the book business, I'm not rich.

By this time, I'd found better examples, and Andrew had found a quote from Uffa Fox that showed he didn't think he'd invented the planing dinghy, though he had greatly improved it. But according to Herreshoff, the young men of his generation found their imaginations inflamed by the plans for the 'racer for $50,' and many were built. Rudder later promoted a design called the Snipe by a later editor, William Crosby, which became one of the most popular classes in the world.

Was Lark, as Davis had named his design for the $50 racer, the Ur-dinghy, the missed chance to start an even earlier class? Here bibliophile's obsession kicks in. This is information that cannot be found on the Web, part of the knowledge that a generation is missing because they can't find the text through a search engine.

I learned that Mystic Seaport, that Mecca for the soggy fellowship of traditional boat enthusiasts, had copies of the fragile old magazines that the how-to-build article had run in back in 1898. For the price of a moderately scholarly trade paperback, I got six 11x17 photocopied pages of plans and text. They showed a boat nearly the same size as a Snipe that would have been faster and lighter, a boat that would have achieved higher speeds especially on a reach, where the Snipe's weight and hull form make it difficult to get the boat on the step. Davis described overtaking the waves while sailing, a pretty good indicator of planing behavior, though in 1898 -- and here was the other problem with our forum conversation -- the language we now use to describe planing didn't exist.

Perhaps someday, someone will build another "$50 racer" (though I suspect it would cost a couple grand, now.) In the meantime, I get a warm glow when I look at those lines, and the simple construction drawings.