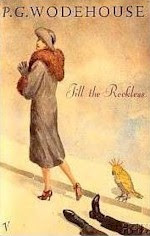 Reviewers are the Praetorian Guards of literature. They can anoint the new Caesar, keep him in his post, or bring him down.

As a bookseller, I know that with literary fiction and mysteries, the imprimatur of the New York Times book reviewers is golden. With science fiction, word of mouth and a good premise are more important, in history there are books that cover a topic no one else has, and the book has value for that reason.

But even within the categories where reviewers wield godlike power over readership, there are exceptions. Books that are funny can succeed without the accolades of reviewers. This is a good thing, because humor does not seem to be held a very high accomplishment by reviewers.

I suppose this is understandable. If you finish a book, lay it down and think, "So. Nietzsche was right about God," there is a feeling that the writer has been very serious and achieved something great. The successful humorist accomplishes something subtler and more difficult, leaving readers feeling as though something rather nice has happened to them.

Readers value this highly, and become devoted to writers like P.G. Wodehouse, who can accomplish this consistently.

As it happens, Wodehouse is my favorite author. He was British, but enjoyed his greatest success in the United States, first as a librettist for musical comedies in conjunction with Guy Bolls and Jerome Kern, then, when the Saturday Evening Post started accepting his work in the 1930s, as a novelist and short-story writer.

The sharp-tongued Dorothy Parker waxed lyrical about the musical comedies, and enough people in the publishing industry were fans that even when his work was not terribly profitable, they published him. But Wodehouse sometimes seems to have missed the approval critics bestowed on serious writers, the sort who wrote about despair in the suburbs.

There is now a Wodehouse Prize for comic writing, but fewer prize are given than good reviews. Too few reviewers give credit to good comic writing, but despite their tendency to slight this sort of book, readers are willing to try a book that lacks the aristocratic New York Times review if it looks like it might be funny.
Email Post