Webb's study stymied: The do-nothing congress does nothing about prison reform

A filibuster blocked Sen. James Webb's bill to form a commission to study federal, state and local prison practices. With 57 senators voting for considering the bill and 43 against, the study is stymied. All those voting against the bill were Republicans, which may help explain why Webb is an ex-Republican. All the senate Democrats and four Republicans supported the bill.

Oklahoma Sen. Tom Coburn spoke against the study, claiming it would encroach on states' rights.

"Their inflammatory arguments defy reasonable explanation and were contradicted by the plain language of our legislation," Webb said in a prepared statement. "To suggest, for example, that the nonbinding recommendations of a bipartisan commission threaten the Constitution is absurd."

Coburn doesn't seem to have referenced any particular provision of the constitution that bars the federal government from even studying state and local prison practices.  And in fact, the federal courts have been heavily involved in state prison practices for decades, and as recently as this June the Supreme Court ruled that California must cut its prison population from 143,435 to 109,805. Contrary to Coburn's claim, when prisons violate the 8th amendment, the federal government has every reason to get involved.

The Houston Chronicle reports that reforms to the Texas prison system helped lower the recidivism rate and prevent the state from having to build more expensive prisons.

Pew Research reports recidivism rates ranging from 22.8% in Oregon to 61.2% in Minnesota (the only state with a higher recidivism rate than California.) With that much variation between the states, surely some sort of study is in order to find the best practices and spread them. I'd much rather have people working and paying taxes than living at my expense in a jail that does nothing but put them in contact with the sort of people who will advance their careers as criminals.

Webb laid out the problems with our penal system in a 2009 article he wrote for Parade magazine:

The United States has by far the world's highest incarceration rate. With 5% of the world's population, our country now houses nearly 25% of the world's reported prisoners. We currently incarcerate 756 inmates per 100,000 residents, a rate nearly five times the average worldwide of 158 for every 100,000. In addition, more than 5 million people who recently left jail remain under "correctional supervision," which includes parole, probation, and other community sanctions. All told, about one in every 31 adults in the United States is in prison, in jail, or on supervised release. This all comes at a very high price to taxpayers: Local, state, and federal spending on corrections adds up to about $68 billion a year.

Our overcrowded, ill-managed prison systems are places of violence, physical abuse, and hate, making them breeding grounds that perpetuate and magnify the same types of behavior we purport to fear.

As Webb points out in that piece, the way this works makes a mockery of the term "justice system."

Justice statistics also show that 47.5% of all the drug arrests in our country in 2007 were for marijuana offenses. Additionally, nearly 60% of the people in state prisons serving time for a drug offense had no history of violence or of any significant selling activity. Indeed, four out of five drug arrests were for possession of illegal substances, while only one out of five was for sales. Three-quarters of the drug offenders in our state prisons were there for nonviolent or purely drug offenses. And although experts have found little statistical difference among racial groups regarding actual drug use, African-Americans--who make up about 12% of the total U.S. population--accounted for 37% of those arrested on drug charges, 59% of those convicted, and 74% of all drug offenders sentenced to prison.

I know I've run this graphic before, in this post, but it's so mind-boggling perhaps I should run it every time I address this topic: 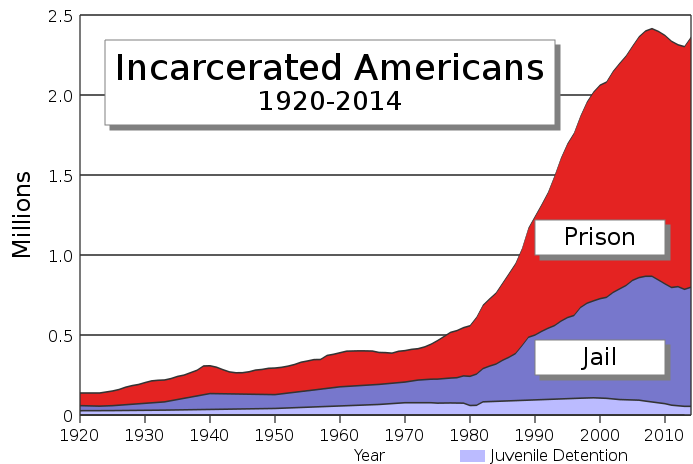 Did we suddenly become an evil people in 1980? Or did something go terribly wrong with the way our criminal justice system works?