I watched the news on television, something I seldom do, and saw Mitt Romney give his victory speech for the recently concluded primary. He was attacking President Obama, claiming Obama wants equality of outcomes rather than equality of opportunity.

One of the men below had more opportunity than the other. Can you find him? 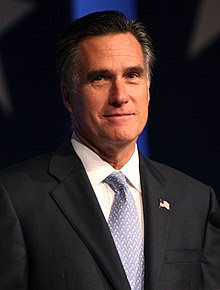 Underneath the vid of his speech, CNN had a meter of how well he was doing with a focus group of Republican South Carolina voters. I couldn't help noticing that this part of his speech didn't do as well as the other parts.

Could it be that the multimillionaire son of a multimillionaire, the former governor son of a former governor, is the wrong person to make this argument about an african-American son of a broken home who managed to get scholarships and do amazingly well in college and by dint of hard work, a fine mind, and good character made it to the highest office in the land? Does he think the president wants us all to live in the White House?

He also claimed that Obama got his ideas from Europe. Could it be that Romney, who speaks fluent French and at one time lived in a large mansion in Paris is the wrong man to make that argument as well?

This leads us to an intriguing question. Why does Mitt lie? Surely he knows all the nation is watching. Does he believe that no one will call him on this, or that voters are too dim to notice? Does he believe that a constant stream of lies will make it impossible to untangle the mess, and leave people with the impression that some of it is true?