Political reading according to Amazon

Amazon has released a list of best-selling political books which shows that conservative books sell better than liberal ones, and shows where each type is selling more. Since this is a naked attempt to drum up sales on their part, I'm sure they won't mind if I reproduce the map here, and link to the list of books included here. 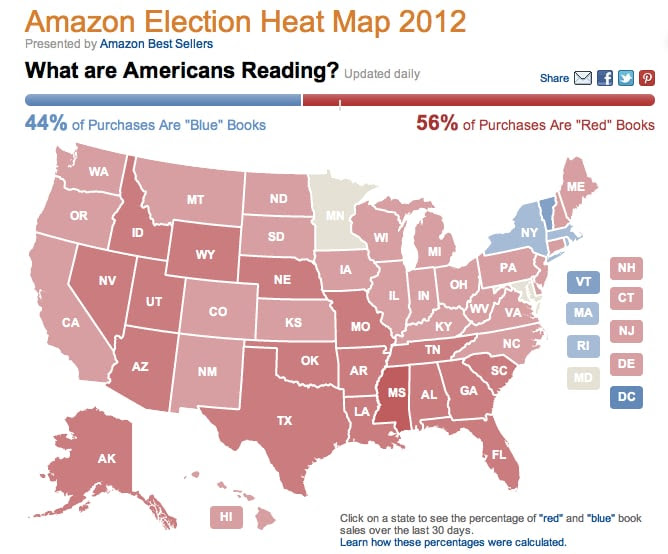 It's actually an interactive map, so you should go to the link above and click on your own state to see which books are best selling where you are.

The list has some peculiarities. It omits Outliers, Malcom Gladwell's book on how successful people are not self-created, but owe much of their success to where they came from. This would generally support President Obama's "you didn't build that" (in the sense that he actually meant it) meme. The list includes one novel, Atlas Shrugged. Is it too early to parse the politics of The Hunger Games trilogy?

But in general, the list is more interesting for what it includes. Much of the right-wing reading consists of screeds against the president. Paranoid titles like The Roots of Obama's Rage and Communist give a hint to how unmoored much of this stuff is.

The unreasoning hatred reflected in these titles may, as some have suggested, have something to do with race, but I suspect it has more to do with having a Democrat in office. Republicans were similarly deranged when Bill Clinton was in office, after all, and while some referred to him as "our first black president" because he was comfortable naming black appointees not just to highly visible posts, but to less visible ones down the pay scale, he was not, you know, black.

Of course, there were a number of best-selling anti-Bush books during W's administration, but most fell into the categories of mockery (Molly Ivins) and policy disagreements (Bob Woodward.) I don't recall any that said he hated America, or was a secret Fascist, at least in the best-seller category.

Although Ezra Klein suggests that conservative books are outselling liberal books because it's easier for the opposition to sell books, I'm inclined to suspect that conservative books sell better generally. Politically engaged liberals are more likely to read I am America and So Can You than any book designed to help them nurse their resentments.

Some media just works better for some audiences. Conservatives forward their emails, liberals share their facebook memes, conservative dominate talk radio, liberals dominate political comedy shows. As someone moderately liberal, I like to think this reflects the paranoid style of conservatives and the more playful style of liberals. I suppose the conservative take would be that conservatives take politics more seriously, which leads us to another conflict. When I take things seriously, I study them. When Rush Limbaugh takes things seriously, he rants about them and doesn't worry much about getting his facts straight. His listeners seem to agree with that set of priorities.

In Reflections on the Revolution in France, Edmund Burke, one of the towering figures in conservative thought, defended prejudice as the distilled wisdom that had grown from an ancient civilization. He said that those attitudes allow people to act properly based on their feelings, without having to think through every act. We hear echos of that argument in the way that conservatives seem more focused on how they feel than on a careful examination of the facts. We hear it in their disdain for President Obama's professorial demeanor. We hear it in Limbaugh's factually inaccurate but passionately felt rants.

And if liberals are influenced by the Enlightenment, one would expect them to read books like Outliers, which try to get the facts right and are not about resentment.

Or perhaps we're making this all too complicated. Perhaps the answer is in this chart:

The most obvious answers would be that either liberals buy more books per capita, or left-leaning books appeal more to moderates than conservative ones.
Email Post