Christ Stopped at Eboli: A desperate but magical world 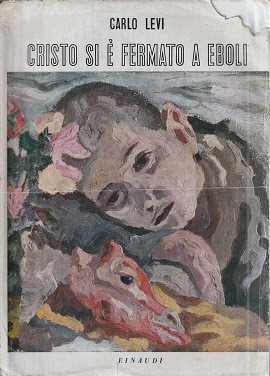 One of the more remarkable non-fiction books I've read is Christ Stopped at Eboli, by Carlo Levi, an account of his internal exile into a small town in southern Italy in 1935-1936 because of his anti-Fascist beliefs and political activity. He was later imprisoned, and the book was not published until after World War II.

Levi was a doctor, a painter, and a liberal, which set him apart from the anti-democratic views of both the Communists and the Fascists (in the 1960s, he was elected to the Italian senate as an independent listed on the Communist Party ticket.) Mussolini's idea was to bury him alive in a town which did not have rail service or bus service, so that his views would not have influence.

Despite his status as a political prisoner in the town, the people of 'Gagliano' (he changed the name, actually he was exiled to Grassano and Aliano,) readily accepted him. It helped that they had little respect for the men who represented authority, the mayor, the doctors, and the priest. Levi's willingness to do what he could medically for the people he lived among helped, because the local doctors were inept.

Eboli, referred to in the title, was the nearest town with rail and bus connections. The meaning of the title, a phrase he heard in his new surroundings, was that much of modern civilization -- Christianity, the state, economic and cultural links to the outside world -- stopped at Eboli, never reaching 'Gagliano.'

He soon learned that his housekeeper was believed to be a witch. She'd had children by the previous priest, more popular than the current one (this was not uncommon. I actually know a fellow who is descended from a priest in a small town in southern Italy.)

Some of the townspeople had gone to America, and many houses had portraits of Franklin Roosevelt, but not of Mussolini (and often a framed dollar bill sent back by a relative in America, as well.) It's pretty easy to see why Italy got into a civil war after the Allies invaded Sicily, where they were (I kid you not, this is the phrase in Wikipedia) greeted as liberators. Mussolini was ousted and arrested, then rescued by the Germans to run a puppet state in the north, fighting against southern Italians.

Politically, the book is a reminder that Italy was a young country, made up of little states that joined together in 1861. Levi speaks of the towns that were aligned with the "bandits' (anti-unionist Italians, many of their leaders being nobles who would lose power.) Italians in the 1930s often spoke a local dialect as well as Italian.

But to me, the real meat of the book is the persistence of beliefs in spirits not sanctioned by the church, in witchcraft, in mischievous gnomes, said to be the spirits of children who died before baptism, in dreams that revealed the location of treasure, in the power one old man was said to wield over wolves.

It was all of a piece with the way they accepted him.

This passive brotherliness, this sympathy in the original sense of the word, this fatalistic, comradely, age-old patience, is the deepest feeling the peasants have in com- mon, a bond made by nature rather than by religion. They do not and can not have what is called political awareness, because they are literally pagani, "pagans/' or countrymen, as distinguished from city-dwellers. The deities of the State and the city can find no worshipers here on the land, where the wolf and the ancient black boar reign supreme, where there is no wall between the world of men and the world of animals and spirits, between the leaves of the -trees above and the roots below. They can not have even an awareness of themselves as individuals, here where all things are held together by acting upon one another and each one is a power unto itself working imperceptibly? where there is no barrier that can not be broken down by magic. They live submerged in a world that rolls on independent of their will, where man is in no way separate from his sun, his beast, his malaria, where there can be neither happiness, as literary devotees of the land conceive it, nor hope, because these two are adjuncts of personality and here there is only the grim passivity of a sorrowful Nature. But they have a lively human feeling for the common fate of mankind and its common acceptance. This is strictly a feeling rather than an act of will; they do not express it in words but they carry it with them at every moment and in every motion of their lives, through all the unbroken days that pass over these wastes...

They didn't care for the current priest, rumored to be a pederast, and did not attend his services. Magic was more real to them, in a world haunted by spirits, as it had been long before Christianity had arrived. The gentry were all members of the Fascist party, which represented power, but none of the peasants were.

The book is a portrait of a world of poverty and bare subsistence, of resignation to the power of the state, which like the weather or malaria or the spirits cannot be controlled. It is in many ways a portrait of a pre-modern mindset in which the world was enchanted with spirits everywhere, but life was hard and often short, hunger was common, and malaria took an astonishing toll.

Levi seems to have written the book mainly to highlight the desperate poverty of Italy's south, which stood in stark contrast to the prosperity of the north. And the south is still far less prosperous than the north. But the real legacy of the book, and the reason it is still read today, is a portrait of a pre-modern, 20th century European people in a desperate but magical world.