The seventh sex, and other sexes.

The reactions to Bradley Manning announcing that henceforth she is Chelsea Manning has brought home to me how quickly our culture is changing it attitudes toward gender identity.

Ah, if only it were that simple.

One problem is that desire is at least as mysterious as  emotional gender. People may mix any of the seven genders with another. They can be men who love women and men, they can be women who are men who love men, and we may never have enough pronouns for it all.

Which set me to thinking, how necessary was sexual reassignment surgery for the happiness of this man? Wouldn't he be better off if the world accepted him as a man, while he retained the plumbing compatible with his desires? Perhaps, as our society becomes more accepting, we will see a time when he could have been husband to a heterosexual man, even starting a family.

I'm sure there are many transsexuals for whom, regardless of who they are attracted to, the physical change in gender is needed for them to feel right. But the whole idea of changing someone's gender by surgery strikes of a 1960s scientific triumphalism, and the old liberal claim that the human mind is infinitely adaptable.

Doctors therefore assumed that you could assign sex to intersex infants and they would adapt to being whichever sex the doctor chose for them. The mind is a tabula rasa, they figured, and the child would engage in the learned behaviors appropriate to the assigned gender.

This, of course, is silly, as should have been obvious at the time. Even people who have no desire for children, for example, feel deprived if they do not get to take part in reproductive behavior, because we are creatures of instinct as much as of intellect. These instincts help give us the motivation to do something rather than nothing, so it's as well we have them.

But sexual reassignment, as opposed to sexual assignment, is an intervention when something has gone wrong, when the soul of one gender occupies the body of another. We have come to expect a technological solution to everything, so rather than accept the transgender person's word for it that they are the gender they feel they are, we fixed their bodies -- not just so that they could be comfortable in their bodies, but so that others could be comfortable with the gender choice they've made.

The thing is, often technology changes more rapidly than culture. When sexual reassignment surgery was invented, our culture set a bright line between men and women, and demanded that you choose. The alternative, to live your life as the gender you choose without any physical change, is a choice many people made. Billy Tipton comes to mind. 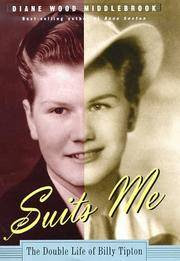 Tipton might have lived longer had he been willing to go to a doctor, but was too desperate to protect the secret of his female anatomy. It was a secret his adopted sons learned only when paramedics were trying to save Tipton's life.

When Tipton chose his gender identity, it at first appeared he was just trying to break the glass ceiling. He was a jazz pianist, and while the other musicians accepted him as a player knowing him to be Dorothy off stage, he apparently thought audiences would accept him better as a man.

But there was more to it. While at first, Tipton only donned male drag for performances, he was soon living his life as a man, even convincing a lover that the binding on his breasts was needed to protect damaged ribs, and that he lost his penis in the accident that had injured his ribs.

Maybe he dated women who wanted to believe him. The choices people make in their personal lives are more interesting and complicated than those who observe their public lives may ever know.

And why shouldn't his lovers have believed him? If biology is not destiny, why must we change it?

Sexual reassignment surgery was not an option when Tipton adopted his way of life, and by the time it was an option, he was poor, and already had made a life as a man, so perhaps the surgery was both inaccessible financially and unneeded for him to live his life. Yet his anatomy was such a dark secret that he refused medical treatment when he was deathly ill, apparently in fear of his secret being revealed, until it was too late to save his life.

It seems to me such a tragedy could best be averted by accepting who he was. He was born only four years before Marian McPartland, who had a wonderful career as a jazz pianist, so I'm not convinced that the male drag was needed for his career, though who knows, maybe for a woman to succeed as a jazz pianist back then, you had to be as talented as McPartland, a musical prodigy from the time she was three.

But to live his life, he needed to be a man, and in the absence of surgery, concealment was his method. Times have changed, and we no longer live in a time of secrets and shame. We live in a time when all can be known, and much can be accepted.