Chinglish, an art form under threat

As the use of English as an international language moves on apace, people who are not native speakers are using it to communicate more and more. In China, the phenomenon of the resulting imperfect translations is called Chinglish, and the government frowns on it.

Which I'm guessing was not the name of the restaurant.

Robert Frost said "poetry is that which is lost in translation." But sometimes, translation creates poetry:

I'm guessing that's not far from the author's intent, actually.

Sometimes, the original sense is difficult to divine:

I promise my employees that however troubled I may become, I will not follow this management advice.

There is a naivete that I find attractive in even the most awkward examples: 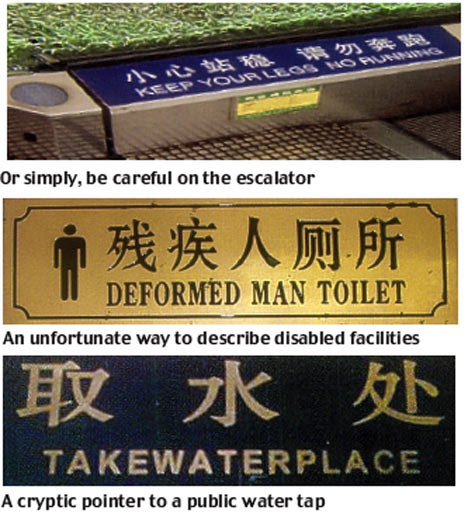 But even as this art form is gaining popularity, officialdom is cracking down on it.

Late last month, the southern city of Shenzhen launched a two-month campaign intended to remove all Chinglish signs with the help of local English-literate residents. The Shenzhen Daily reported that people were being encouraged to take pictures of incorrect English usage or grammar issues on public signs and use social media to report them to the appropriate people. People who sent in photos were asked to include the location of the signs and detail the mistakes made, at which point the city’s foreign affairs office would look through submissions.


I can only imagine what horrible blunders I would make, as a non-Chinese-speaking person, trying to get the sense of what I wanted to say in a sign I couldn't read after I'd had it translated.

An interesting aspect of this is that in international corporations where English is made the standard language of the company, you'd think that being a native speaker would be an advantage. But native speakers tend to use elaborate constructions and colloquialisms that confuse non-native speakers, so perhaps it's better to be a skilled student of the language than a native speaker.