Ideology and unemployment, Koch and Gates

Josh Barro, a conservative writer who has not turned off his brain, notices that Republican economic policy prescription  are always the same, regardless of the economic problem:

That is, conservatives favor the same set of economic policies when the economy is weak and when it is strong; when unemployment is high and when it is low; when few homeowners are facing foreclosure and when many are. The implication is that conservatives believe there is nothing in particular the government should do about economic cycles.

He seems to think this is a bug, not a feature. The thing is, conservatives have become increasingly devoted to the notion that government is the problem, not the solution. In the 1980s, Milton Friedman was the leading conservative economist. He was a monetarist, which is to say, he thought that monetary policy could do the things Keynesians thought you needed fiscal policy to accomplish, like preventing a depression. 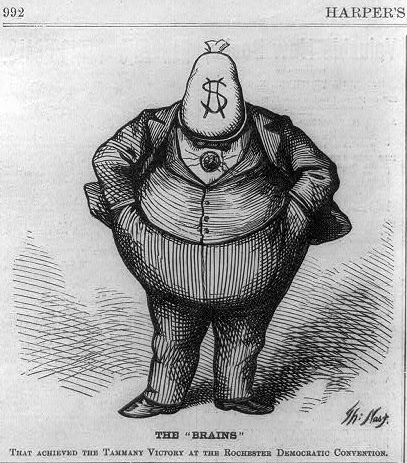 This elevated Federal Reserve Bank chairmen to a high level of esteem, because they were the most prominent figures in monetary policy. But the notion that government could do anything to make the country work better offends the modern conservative sensibility; they now admire leaders like Ron and Rand Paul, who would prefer to "end the fed" and go back on the gold standard.

In fact, they seem to wish to return to the disastrous economic policies of Andrew Jackson. If Jackson's policies in the 1830s are fairly described as "economic nostalgia," and he was unable to restore the nation of small farms and artisans back then, the Ron/Rand Paul nostalgia has even less chance.

But the ideology which wishes to deny government can do anything to help avoid or shorten recessions is not just a nostalgia for a lost nation of small farms. It is a throwback to an old notion of the relationship between virtue and wealth.

Remember that many of these conservatives are convinced America is a Christian nation, and most are Protestants. One of the most influential protestant notions is the Calvinist idea that wealth is a sign of God's favor. After all, Calvin believed in predestination, so your wealth was not a result of your own efforts, it was a sign that were one of the Elect.

This fits very well with the right's admiration for those who possess inherited wealth, such as the Koch brothers, and their efforts to eliminate the inheritance tax. The Koch family is Catholic, but a useful idea is there to be used, regardless of your religion, or the preferences of the leader of your religion, right?

The Koch brothers wear a peculiar expression, a rather superior, entitled look, as if they know they are better than you because they were born that way. Compare this to the expression typically worn by Bill Gates, who built his own fortune and carries an assortment of pretty ordinary expressions. Gates comes from a different culture. His father is an advocate for the state of Washington adopting an income tax, which would make its tax system less regressive (the bottom 20% of earners in the state pay a higher percent of the state's revenue than in any other state.)

And now that he's retired, Gates the younger is running the Bill and Melinda Gates Foundation, which is dedicated to the idea that "everyone deserves to live a healthy, productive life."

The Koch family foundations tend to finance political organizations and think tanks that support the idea that rich people deserve to get and keep more wealth. Oh, and ballet.

The economists who wrote Why Nations Fail suggested that the nature of a nation's institutions may dictate whether a nation becomes wealthy or fails to. Extractive institutions, they suggest, allow elites to impoverish their nations while enriching themselves. Gates is not a fan of the book, but he himself seems to be working to build an institution that is inclusive rather than extractive.

The point is, it makes a difference what sort of elites you have. Gates, like Warren Buffet, thinks that if the budget needs to be balanced, rich people should pay more taxes. That in itself indicates a preference for inclusive institutions, which tend to be based on the idea that we're all in this together.

The Koch brothers spend a good deal of money supporting the American Legislative Exchange Council (ALEC), which works hard on repealing the inheritance tax. It seems clear that they are trying to change our institutions to extract less from them, and more from those less fortunate, which is pretty much a useful definition of extractive elites.

Because elites have an outsized role in shaping their society's institutions, the culture of the elites seems to matter a great deal. The Republican Party, which has an increasingly naked agenda of shaping the country in a way that benefits its donors, always has the same agenda because those donors always have the same agenda. After all, it's not like the Koch brothers are likely to lose their homes when unemployment is high, so why should they ask that the party they help finance adopt policies that help those who might have that problem?

Fortunately, not all of our elites share their approach. Unfortunately, most of those who spend a lot of money on politics do.