If the Trump saga were a Robert Ludlum novel

As a bookseller, my knowledge of what really happened in the interaction between the Trump campaign and the Russians is no better than yours, dear reader, but I know how Robert Ludlum would have written it.

First of all, to appeal to the prurient interest of the reader, the Russian kompromat tapes of Trump paying prostitutes to pee on each other on the bed he knew Barack and Michelle Obama slept in would have to be real.

Second, Trump's unwillingness to make public his income taxes would have to be because they would show that without Russian money, he's bankrupt and destitute. And they would provide enough clues to set the special prosecutor on his trail for money laundering for the Russian mob.

Third, Donald Trump's July 7 meeting with Vladimir Putin would have gone badly. He urged his staff to come up with "deliverables" that would satisfy Putin, even though he had been unable to lift the sanctions on Russia, as he had promised, but Putin wasn't satisfied. 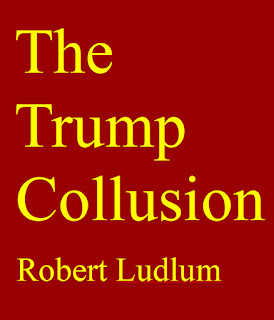 Putin therefore decided Trump needed more motivation. He demonstrated his power over Trump by throwing Donald Trump Jr. under the bus, and used his allies on the White House staff to leak the information in order show Trump just how little control he has over his fate.

In the Ludlum version of events, Putin would have cultivated Trump for years, exploiting his narcissism and greed to compromise him enough to act as a Russian (unwitting?) asset. Putin would have promised his aid in getting Trump elected, and delivered.

In this spy novel Trump knows the Russians hacked the Democratic National Committee's emails, as well as those of John Podesta, Hillary Clinton's campaign chairman. He knows that his get out the vote campaign was very targeted and effective because of the information the Russians supplied after they hacked the voter-registration rolls from about half the states, and the information they supplied from hacking the Democrats' get out the vote files. Putin has told him that his narrow margins of victory in the upper Midwest are due to Russian hacking of the vote totals, and he has no reason do doubt this, so he's directed the Justice Department not to investigate.

In the Ludlum version of events, the apparent May 14 suicide of Peter Smith, a Republican operative who had begun talking to the Wall Street Journal about his efforts to get Russian-hacked emails from Hillary Clinton's infamous private server would not be a suicide at all. Ludlum would explain in thrilling detail how the Russian assassin managed to asphyxiate Smith with hydrogen after making him write a note apologizing to authorities and saying "no foul play whatsoever" was involved in his death.

The spy novel would include some social commentary, showing that Republican leaders were aware that Trump was horribly compromised and probably the pawn of a foreign power, yet helped conceal this from the public and refused to consider impeaching him because A) their lust for power meant more to them than their patriotism, and while Trump would be a Russian asset in the White House, they considered the Democrats their real enemies and B) they are afraid that Republican voters will punish them if they act ethically against this monster.

The novel can't end with an impeachment. Congressmen indicting Trump and Senators voting to find Trump guilty of high crimes and misdemeanors would be naive in the context of a spy novel, indicating far too much faith in democratic institutions. The ending, like the rest of the novel, would show how shadowy figures run our world while most of us are able to sleep at night because we don't know what's really happening.

This gives the reader a paradoxically reassuring feeling that someone is really running things, rather than the apparent chaos they see on the news being reality.

There are several ways Ludlum could end the book.

Putin, who really doesn't understand the constraints an American president faces, could decide that Trump had betrayed him, and have his agents inside the White House spike Trump's Coke with polonium.

Or Trump, knowing that Putin will destroy him by releasing the pee tapes, could try to destroy Putin first with a nuclear strike, only to die in a struggle with his Secretary of Defense, who is determined to avoid a nuclear holocaust. Picture reports of a gunshot in the White House, followed by a pale Jim Mattis facing the Secret Service agents and announcing that he shot the President in a struggle for the gun an increasingly paranoid Trump had insisted on carrying.

Or, Robert Mueller III's investigation as special prosecutor could result in a circular firing squad as desperate underlings plead state's evidence to save themselves, leaving Trump lonely and afraid. As even his children and his wife start to testify against him, Trump issues blanket pardons to his underlings and family. A compliant Republican congress, a supine Supreme Court mainly appointed by him, and a Republican-dominated military agree to make him president for life. The American dream is over, and the nightmare has begun.

Fortunately, real life is not so dramatic. Nothing to see here, folks, move along.