The Tea Party Caucus now has 62 members in the House of Representatives, four in the U.S. Senate. Will we ever see an Occupy Wall Street caucus?

I ask this because Vice President Joe Biden has compared the two. Both feature home-made signs, wild costumes and political goals that seem hard to define.

The Tea Party was built on two main pillars, according to this study: Conservative ideology and racial resentment. From the study's abstract:

This finding matches pretty well with an earlier study by David Campbell and Robert Putnam. They interviewed a representative sample of 3,000 Americans in 2006 as part of their research in regional political attitudes, and interviewed those same people again this past summer, so they were able to see what peoples' attitudes were before they became part of the Tea Party. This allowed them to deduce who was attracted to the movement.

So what do Tea Partiers have in common? They are overwhelmingly white, but even compared to other white Republicans, they had a low regard for immigrants and blacks long before Barack Obama was president, and they still do.

More important, they were disproportionately social conservatives in 2006 — opposing abortion, for example — and still are today. Next to being a Republican, the strongest predictor of being a Tea Party supporter today was a desire, back in 2006, to see religion play a prominent role in politics. And Tea Partiers continue to hold these views: they seek “deeply religious” elected officials, approve of religious leaders’ engaging in politics and want religion brought into political debates. The Tea Party’s generals may say their overriding concern is a smaller government, but not their rank and file, who are more concerned about putting God in government.

Just looking at the pictures of people who are in those Occupy Wall Street pictures, they look like the mirror image of the Tea Party crowd -- except that they, too, are predominantly white. Not as nearly exclusively white as the Tea Party, but here's a picture from Wikipedia illustrating the OWS movement: They are younger, by and large, and shaggier, and a bit more racially mixed, as you would expect of a group not founded in part on White racial resentment. Also, if they display the American flag, they do so upside down, to signal the nation is in distress. 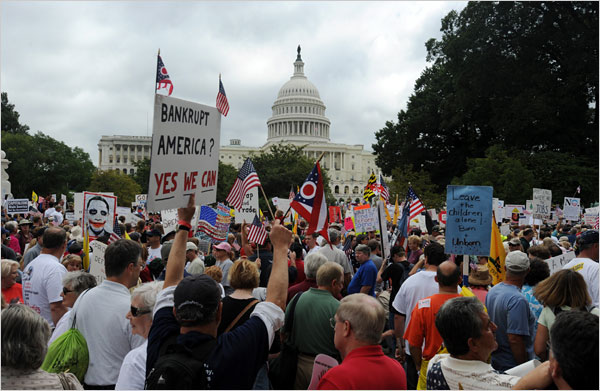 Amanda Lucidon for The New York Times
A crowd marched toward the Capitol as people from around the country gathered to express their discontent with the government. More Photos >

By JEFF ZELENY
Published: September 12, 2009
WASHINGTON — A sea of protesters filled the west lawn of the Capitol and spilled onto the National Mall on Saturday in the largest rally against President Obama since he took office, a culmination of a summer-long season of protests that began with opposition to a health care overhaul and grew into a broader dissatisfaction with government

Have you spotted the non-white participants in this rally? The closest thing to it that I've found are a couple posters depicting President Obama as the Joker (Heath Ledger edition.)

In fact, the people participating in OWS look pretty much like the peaceful protesters at the 1999 Seattle World Trade Organization ministerial conference, which became notorious as the Battle in Seattle after some nihilists introduced violence into the mix by smashing windows. These black-clad anarchists were about the most organized group there, advancing in a black bloc. What smashing the windows of Fox's Gem Shop had to do with protesting against globalization isn't clear to me at all, but that sort of activity gave the police a justification to come down hard on all the protesters.

We can certainly hope these jerks don't show up this time around, but we're also faced with the fact that the anti-globalization protesters lost momentum pretty quickly. Part of the problem was that they didn't have any suggestions that would result in the near-term improvement of any Americans' lives. Their demands were diffuse and impractical. It reminds me a bit of the exchange in The Life of Brian just before the memorable "what have the Romans ever done for us?" scene:

COMMANDO XERXES: What exactly are the demands?
REG: We're giving Pilate two days to dismantle the entire apparatus of the Roman Imperialist State, and if he doesn't agree immediately, we execute her.

In any human conflict, resolution in your favor requires that the other side be able to submit, which means victory is only possible if your goals are achievable. OWS needs such goals, and I think the country needs them as well. We've got problems, and there are solutions, but those solutions don't appeal to our current crop of politicians.

Here's a suggestion. We're in a balance-sheet recession. People are unable to get out from under enough debt to contemplate spending any money, and the lack of demand for what they are selling is why businesses aren't hiring. A couple kinds of debt have special status under American bankruptcy law. A bankruptcy court cannot write down the principle on mortgages or student loans. And since you can give back a house but not an education, student loans can't be discharged in any way other than paying them off except under extreme circumstances.

Let's give those types of loans the same status as any other secured debt.

An even more popular goal would be to return the tax rate for the top income earners to an earlier level. Perhaps not to Eisenhower rates (top rate 90 percent) or Kennedy rates (he lowered the top rate to 70 percent) but to some level commensurate with the ability the rich have to pay.

For example, Mitt Romney is paying about 14 percent of his income as taxes. Working stiffs pay about that much in payroll taxes (half is paid by the employer, but it's all payroll expense, so it all comes from what would be paid) before they even start paying income taxes. Romney, who pulls down around $15 million a year, can afford to pay a higher rate. In fact, if he were a basketball player making the same money as earned income instead of as capital gains, he'd be paying more like 30 percent under current law.

Take a look at the chart from this article:

You don't have to be John Kenneth Galbraith to notice that periods of low taxes have been followed by long recessions that differ from most recessions in that they follow financial crises. Such balance-sheet recession are different in kind than most recessions, and may have something to do with the distributive effect of such policies.

The International Monetary Fund recently completed a study (full study here) that shows the effects of income inequity on economic growth, and found that societies with great inequity tend to have more financial crises.

Here's a chart from the study:

The greatest predictor of economic growth is income distribution, followed by trade openness.


...the increase in U.S. income inequality in recent decades is strikingly similar to the increase that occurred in the 1920s. In both cases there was a boom in the financial sector, poor people borrowed a lot, and a huge financial crisis ensued (see “Leveraging Inequality,” F&D, December 2010 and “Inequality = Indebted” in this issue of F&D). The recent global economic crisis, with its roots in U.S. financial markets, may have resulted, in part at least, from the increase in inequality. With inequality growing in the United States and other important economies, the relationship between inequality and growth takes on more significance.

The result has been good for no one, so why do we persist in policies that produce so much inequity?

Simple human nature. People don't feel rich unless they are richer than their neighbors. A rising tide may lift all boats, but some of us feel richer if the other guy's boat sinks. It's time to put a stop to that sort of thinking, and realize that we are all in this country together.