Here's an interesting perspective on China's growth as an economic power (from here): 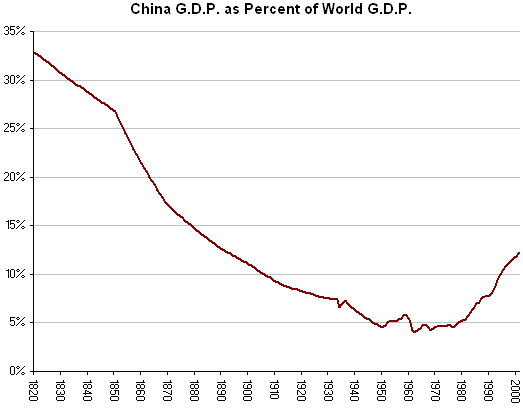 Clearly, China's rise is not so impressive as its decline has been. From a third of world GDP to less than 5% of world GDP is an impressive decline, and shows how badly managed the country was for many years. Since Deng Xiaoping's reforms, the recovery has been dramatic, but the long slide demonstrates the decline of one of the world's great civilizations.

When European and American merchants were first dealing with China, they found there was nothing they made that the Chinese wanted. Our best porcelain, for example, were called China because it was an imitation of Chinese goods. We could bring them silver and take away manufactured goods, but until Europeans discovered that the Chinese had a taste for opium, there just wasn't much the west had that China wanted.

In some respects, that's not too different from Columbia's trade with America.

The British discovered the Chinese taste for opium, and began importing it from India. Not only did this spread drug addiction in China, it interfered with the deep-seated Chinese belief that China was the center of the world, and did not need what other countries were selling. Eventually, the Chinese tried to ban importation of opium, and lost a war over the matter.

In 1730, the British imported 15 tons of opium into China. By 1773, it was 75 tons, and by 1820, where our chart begins, the trade had ballooned to 900 tons annually. The Qing Empire tried to stop it, but could not, and the Opium War only showed how little they could control their own country in dealing with the foreign devils.

Now, the current government of China is officially Communist, but more than anything else, Chinese. History changes rapidly, culture changes slowly: The Confucian distaste for merchants might be part of the reason Communism had an appeal, but the cultural attitudes that underlay Chinese society have probably changed less than Mao had hoped. Like most ethnic groups, the Chinese would like to see themselves as better than other ethnic groups, and return to a time when everyone wanted what China had.

That may go some distance in explaining Chinese trade policy, though there are plenty of other factors, such as the perception that the Soviet Union fell in part because it did not have the foreign exchange to buy enough food to feed its people (see The Soviet Collapse, Grain and Oil, by Yegor Gaidar, here.)

Restoring China to her former glory would certainly please her leaders, and help with the legitimacy problem they face with the collapse of Communism as an ideology.

But can they go back to being the world's most wealthy and powerful empire, with a third of world GDP, with the same sort of trade rules? I doubt that making silver the only trade good they will accept will work next time around. Chinese policy has tried to make it so that they can run a trade without having the currency appreciation that usually accompanies such a surplus. The U.S. tried such a policy between 1923 and 1929, probably contributing to the crisis that caused the Great Depression. There's a pretty good explanation of the process here.

We can hope that the Chinese have learned something from the 2008 crisis, and can reform their ways in time to head off further crises, but we can't count on it, because China's somewhat opaque politics will determine what policies are enacted. But if China can avoid policies that tend to cause such crises, they can rise again. Perhaps they will not account for a third of world GDP -- their population relative to the rest of the world is not as dominant as it was before North America became densely populated -- but it will become commensurate with the proportion of the world that is Chinese. 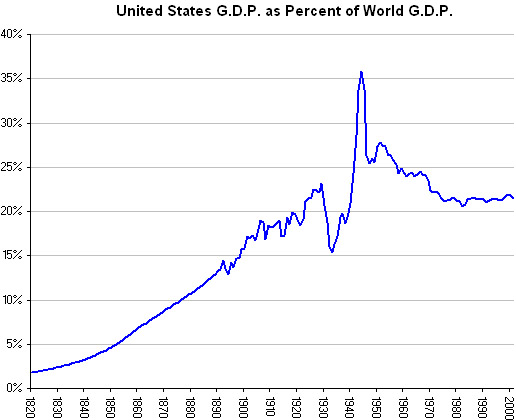 But let's remember where we came from and where China came from. In 1820, we accounted for only about 2% of world GDP, compared with China's 33%. And we didn't just become more productive, we bought land from France, took land from Mexico, and took land from the Indian nations. Our pursuit of natural resources involved some sharp elbows. We should be ready to face the fact that China will throw some elbows as well.

But this time around, they need to integrate themselves with the world, not isolate themselves. It was during the time that world trade was exploding that insular China was declining, after all.
Email Post