I once had a customer who collected versions of the Cinderella story. He had Chinese, Muslim, and European versions, and it seemed every time I recommended a new one, he already had it.

I wonder if he had the flapper version? 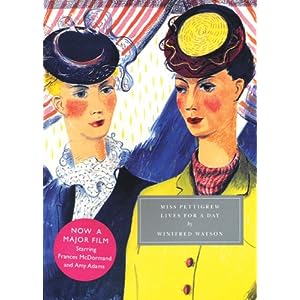 The title is Miss Pettigrew Lives for a Day, by Winifred Watson, and it is one of Jamie's favorite books, so I'm hoping she'll be along shortly to talk about what it means to her and meant to her mother.

Guinevere Pettigrew is oppressed not by her sisters, but by those who control her work, the agency where she hopelessly shows up to ask if they have anything for her, the overbearing employers such as Mrs. Brummegan, and a landlady ready to put her out on the street if she doesn't find a job that day.  One might say she is also oppressed by her social position, the daughter of a curate who must always act as a respectable (if impoverished) gentlewoman.

She is dressed for the ball not by a fairy godmother but by a nightclub singer and the owner of a beauty salon.

She begins not as a soot-covered girl, but as a penniless 40-year-old spinster seeking a job as a governess, a job she is painfully aware that she does poorly, lacking the ferocity required to manage a stranger's children. She lacks confidence, but possesses empathy and a sharp mind.

Thrown into a world where women sleep with men to whom they are not married, and marry for mercenary ends (as Miss Dubarry, the beauty salon owner, has done) and sometimes are attracted to men who will make them unhappy. And in that world, her virtues of caring, empathy, and a quick mind, bring her in contact with her Prince Charming, a middle-aged man who comes to the nightclub where Miss LaFosse (one of the fairy godmothers) sings with a hard but lovely young woman on his arm.

The book has a curious history, its author all but forgotten, but the book finding followers when the publisher did not want to publish it and when it spent time out of print. It has endured because its fans keep coming back to it, re-reading it for comfort, passing it on to friends as Jamie passed it on to me. Winifred Watson wrote few books, and the early ones were the sort of domestic romances that almost no one reads any more. But this one has continued to be read, and was even the subject of a 2008 movie.

It is the sort of very pleasant book that makes no pretense of being great literature, but outlives many books that have every pretension of great literature, and fail, leaving us to wonder, what is greatness in a book?

But they have an enduring value that is different in kind from the work of writers like Kafka or Celene, and a value worth recognizing.