And how will our minds be rewired this time? 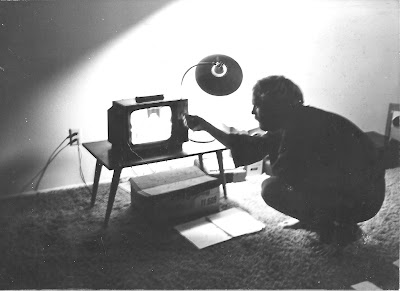 I took this picture as an undergraduate. The legend on the back of this print says, "Timster at the altar, 1977." At the time, I was studying journalism and my housemates were Timster, a geology student, and Eirik, who studied geology sometimes but mostly worked at a hospital as a janitor, applied his knowledge of crystallography to crystals found in patients' urine when doctors asked him to, and climbed mountains. Eirik is now a geology professor, and I've long since lost track of Timster.

This was the state of play in terms of student technology in the 1970s. The only screen in the place was the black and white television, which was not connected to cable. Although we had access to computer terminals hooked up to a mainframe, I had little occasion to use them. Hand-held calculators were expensive enough that few students could afford one, and no student I knew owned a computer. Our living room, like most of those in America, had the typical altar arrangement around the television. If someone wanted to watch something on the television, all those present had to agree to watch it, or leave. Study consisted of reading books, taking notes with a pen on paper, writing papers and either typing them yourself or hiring a typist. We had a telephone which plugged into the wall and was useful for, well, phone calls.

A modern picture of student life might have several roommates in a room, each at a laptop or smartphone, surfing or texting or playing 'angry birds' or watching streaming video, researching papers by accessing resources all over the world instead of working through the card files in the Mable Zoe Wilson library. Writing on a computer is infinitely more forgiving than typing, as you can just backspace and take out errors instead of having to open the white-out and apply the little brush to the offending character.

Do students know more? Alarmists keep telling us no, they are terrible mathematicians, poor readers and worse writers. And yet, as a society, we continue to know more and more. From a presentation by Yuri Milner:


But is this a change from knowing a few great things to possessing a mass of trivia? Did we once drink deeply of the well of knowledge, only now to be drowned in the fire-hose blast of knowledge?

I like this blast of knowledge, and find it stimulating. But I'm painfully aware of what a distraction machine the internet is, and know that sometimes, to accomplish something, I need to limit my intake of information. At other times, I need to distract my mind from its own processes enough to allow inspiration to percolate through to consciousness.

There was a time when academics had little enough access to books that they needed to construct a memory palace* for knowledge of texts they could not continually refer back to. Printing, freeing scholars from that need, was nearly as profound a change in the nature of knowledge as the written word. But reading is a thing one only masters by doing a great deal of it at the right time of life, because it rewires our brains. So, I'm sure, does writing.

Perhaps the internet will rewire our brains again, and change the nature of our consciousness in a way that we will quickly forget. It is part of the strangeness of being human. I've talked before about the odd world we inhabit, stolen children of the book, in this post.

What new strangeness awaits us? And who will remember how our minds worked before the change?


The strangeness of being human is a series of posts about the way language makes us human, giving us abstract categories we use to think and memes that make up much of what we are.