A brief history of Christmas and its most famous book

Christmas is a very old holiday.

It dates back to 601 ad,when Pope Gregory instructed a local (English) missionary, St. Austin, to help convert the local pagan Anglo-Saxons, to celebrate the local winter feast into as a Christan holiday. This new holiday was a fusion of the Roman Saternala and the local pagan holidays grew to 12 days of feasting, from Christmas eve to Epiphany. This holiday was celebrated with pageants, dancing and 'masques'. As late as the era of Henry Vlll and Ben Johnson, special plays were written just for the season (this king himself performed in them in his court).

All this changed under Cromwell, the Puritan usurper who had King Charles the first executed and made himself Lord Protector. The Puritans did their very best to stamp out Christmas, viewing it as pagan superstition.  There were a few places where the old customs hung on, mostly in the countryside, but the great days of Christmas celebration was nearly wiped out. The Restoration decades later did not completely revive Christmas, as the new aristocracy did not support the lavish celebrations for their servants and the general countryside.

With the Industrial Revolution there was further repression of the simple pleasures of the season. Employers in the new factories and businesses did not give their workers the day off to celebrate Christmas Day.

So when Charles Dickens wrote A Christmas Carrol in 1842, the holiday was nearly dead in the new, "modern' England, celebrated by the rural and poor people, but frowned upon by the employers.  It took an American, Washington Irving, to praise Christmas the highest, mourning the loss of the great traditions in this new modern age, in his writings about England.

Dickens admired Irving. In earlier writing, such as Sketches by Boz, Dickens made much of the 'strain of goodwill and cheerfulness' and that this holiday did more to spread good will among neighbors than any preaching or homilies.

Dickens came to write A Christmas Carol when he was at a low ebb. His last book was not popular, and he was struggling with his writing. He was working on nonfiction pamphlets about the horrendous working conditions of children in Manchester.  What inspired him was the vision of Ignorance and Want that he saw in the faces of the starved, overworked and ragged children, the children that the Spirit of Christmas Present showed Scrooge. He worked backward from that scene to compose the whole tale.

He 'laughed and wept and laughed again' when he composed the tale, as he walked 15 to 20 miles a day in the streets of London, composing the tale in his head, then locking himself away from friends, and his family, for the weeks of its composition.

It was an immediate hit. Instantly plagiarized onstage within month, and sold in bootleg editions, this story made the author little money in the fancy first printing. But it made him famous. When he died decades later a little girl was heard to say 'Mr Dickens is dead? Is Father Christmas dead, as well?"   This little story also invented the Christmas Tale, which many authors besides Dickens to this day have composed.

What makes this the best of all Christmas tales is that Winter, the time of Christmas, is according to Dickens ' when Want is keenly felt, and Abundance rejoices'.

So now Christmas is a holiday intrenched in our culture. it is more elaborate now than it was even 75 years ago.  All of us as noticed 'holiday creep' where the mention of Christmas, holiday decorations, ads on TV, and Christmas items turn up in stores as early as November first.

The merchants, instead of not giving their employees the day off, now urge them to go and bankrupt themselves buying things.

This is the effect of it's "commercial"appeal, the chance for retailers to persuade us to buy presents for each other, cook elaborate meals, travel to see relatives, etc.

George Bernard Shaw, who had a role like Oscar Wilde as not only an important playwright in the late 19th century, but also acrid commentator on social folly wrote this.

I am sorry to have to introduce the subject of Christmas... It is an indecent subject; a cruel, gluttonous subject; a wicked, cadging, lying, filthy, blasphemous, and demoralizing subject. Christmas is forced on a reluctant and disgusted nation by the shopkeepers and the press; on its own merits it would wither and shrivel in the fiery breath of universal hatred; and anyone who looked back to it would be turned into a pillar of greasy sausages.


So, the soul of Christmas is often forgotten, in the haste to run about and buy things, throw parties, and generally spend money. 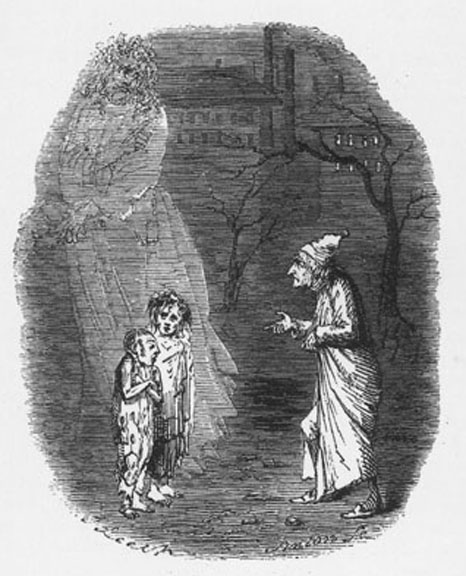 There is the social pressure to 'conform' even if gift giving has become a onerous duty, instead of a joyous thing to do.
.
The 'good man of business', Mr. Scrooge in A Christmas Carol  by Charles Dickens is Dicken's caricature of a 'a good businessman', who has a cold and indifferent heart, and has little contact with the world he lives in. He turns his face away from ordinary charity and warmth, preferring to think about money and making money.

The thesis in all A Christmas Carol is to stop and think about your life. To live life in a thoughtful fashion, filled with compassion.

That to have hope, and to love your fellow man, and that 'Christmas day' is just the focus of this spirit.

Which story is the most important is A Christmas Carol,.  Some historians believe that this story and this story alone is responsible for us still celebrating Christmas. It revived the very old customs on the verge of dying out.

But there is a urgent subtext that drives this tale.
It is the thesis in the mouth of Scrooge that 'the poor should die out, and relieve us of the surplus population' is put in the mouth of Ebenezer Scrooge when he talks to a group of businessmen who came to him for a donation for the poor.

When this story was written, and for decades before and after that, the influence of Malthus, a late 18tth century influential and pernicious science essayist, was that 'poor people' were a social burden to all, and should all die. That they were 'surplus population'

This is why so many Irish died in the Irish Potato Famine, a few years after this tale was written. The English government, which had controlled and occupied Ireland for centuries,  took the position that these poor and starving people were surplus, and were a burden.  Millions of Irish died by inches of starvation, even as that country was exporting food. Charitable organizations in England were stopped by their government from helping the Irish.

This story was Charles's Dickens rebuke of this kind of thinking, by showing the reader the Cratchet family.  Remember Bob Cratchet had six, seven kids...and one was dying by inches, Tiny Tim, because he did not get enough food or medical attention.  Even now, some of the more heartless among   us would sneer at such a family, blaming the parents for 'having too many children'.

Charles Dickens had been poor himself. When he was 12, his dad had to leave him at a factory to work as he had no money to feed him.  This was a terrible experience, working 14 hours a day, six days a week,  among other children in horrible hopeless conditions. He also saw two of his siblings die young from malnourishment. Dickens never forgot these experiences.

When The Spirit of Christmas present said to Scrooge that 'who knew who was truly 'surplus'' Dickens was speaking to the reader, the middle class reader, about the real spirit of Christmas.  A poor carpenter who went from town to town 2000 years ago, talking about love and compassion  was crucified for preaching without a license by the Roman Government. .

We often forget what Christmas is about. The gifts we give each other stand in for gifts to baby Jesus in the  New Testament, who was born in a manger, who came to save us all from our own folly. Even an confirmed agnostic like me can see a value in that old story.

Myth or not, this 'made up' holiday  remembering that a poor child born in a manger shook the world with his message of love, and that it is good to honor his ideals.

Christianity is a touchy subject nowadays. Christ and Christianity has been used as a weapon at our community to tell some of us that we are evil people per sae. This is one of the great social wars of our time..  This has gone on for centuries by unscrupulous religious leaders, with different groups being the target in different times.

This is very curious and unhappy, as the carpenter 2,000 years ago was not patient with haters, or the powerful in general.

Let us be compassionate with each other, see past the blinding and thick commercial haze that covers this holiday, and celebrate our affection for each other; open our hearts to all.