The supreme court is faced with deciding whether we can have same-sex marriage. Whatever they decide, we will eventually get there, by politics if not by legal challenges.

The reason is that the meaning of marriage is changing. There was a time when it was difficult to live a moderately human life without marriage. You needed someone to work the fields and someone to spin and weave and sew clothing, someone to look after the household. As you aged, the only people you could count on to care for you were your children.

When spinning and weaving was generally done in the household, it took up much of the time of the wife. If you bought a suit from a tailor in colonial America, it would cost about a tenth to a sixth of a journeyman artisan's wages to buy an ordinary wool suit. Currently, a journeyman carpenter makes about $27,000 a year, so that would be equivalent to $2,700 to $4,500 for a wool suit. Land's End currently sells such a suit for about $300.

A silk suit would have cost three to five times as much, equivalent to about half a year's wages for our hypothetical journeyman.

Obviously, having someone in the home to spin, weave, and sew would have been very necessary for subsistence farmers, who had little cash income. Cooking, cleaning, and washing were more labor intensive as well.

The mechanization of textiles and of clothing manufacture and time-saving appliances around the home have reduced the value of work done in the home. As a result, in most households both members of a marriage work outside the home. A great deal of labor has moved from the family to the marketplace.

Children on a subsistence farm were not merely a joy, they were a necessity. Their labor around the farms on which most people lived was valuable, and their tendency to take care of their parents was the social security of most of humanity for most of its history. They could even bring in cash income. Abraham Lincoln's father rented him out as a laborer and kept all the money. Now, children are an expense, until they grow up and pay taxes to help defray the cost of maintaining their elders in retirement.

What remains is the social contract writ small.

We must reinvent marriage, because it is an important underpinning to society. An individual may exist alone, but until there are social relations, that person is not part of society. You need friends, allies, and family. And although you are born into a family, that doesn't last. You grow up and your parents die. You must either remain alone, or invent your own family.

Marriage is the legal framework we have developed for people to form families. With the advent of readily available and effective birth control, we have removed the biological as well as the economic imperative to have children. It has always been the case that a family could involve a barren couple, but in the economic world of the 18th century and before, this was considered a misfortune that made the couple poorer and less secure in their old age. Now, to be barren is for many couples a choice.

I suppose in time, mainly people who want children will reproduce, and humanity will consist only of people who are biologically programmed to want children and a few throwbacks to a time when all you had to want was sex.  And, or course, those who do not reproduce but help relatives who do, thereby increasing the chances of their genes being passed on.

But we have no shortage of people. Whether you are inclined to credit the worries of those who say the world is in danger of overpopulation or not, it is difficult to maintain that the world is threatened by a shortage of human births.

Therefore, the value of marriage for its other functions in building a society should be our main focus, provided this focus doesn't detract from couples having and raising children. Sociologists are pretty well convinced that gay marriage does not pose a problem in this way, and in fact, children raised by gay couples seem to thrive, so the effect of gay marriage is to create more stable families in which children can be raised.

Additionally, the contract of two people to form a very small convoy with which to navigate life has got to help make society more stable. One of the larger threats to social order is single men. Not me personally, although I'm single I'm a baa lamb, but in general young, single men competing for honor are more inclined to violence than men who are married.

It's in the genes, and it's been going on a long time, as shown in this cave painting of reindeer butting heads. 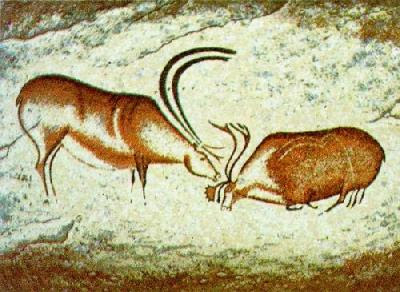 The social imperative is to allow people to form households, so that they can stop butting heads with rivals and settle down.

Now, some have said that gay marriage opens the door to plural marriage. But while gay marriage serves the social purpose of getting young people to marry and settle down, plural marriage works against this, allowing those with more money to have more wives while many  men are left our of marriage. (Or, in the case of polyandry, just reverse the genders.)

The little-known scandal of polygamist sects in this country is the phenomenon of "lost boys" -- boys pushed out of their community so that the older men running things can have more wives to marry. This is clearly not a good deal for either the boys or the women they would have married, who are deprived of choice.

Marriage is a microcosm of the social contract, in which you give up some freedom to enjoy the benefits of society. As we reinvent the institution, we would do well to keep this in mind, and look to the good or harm changes in the institution bring to the social contract. The great difficulty opponents to gay marriage are having is in showing that gay marriage does harm to society. I suspect opponents to plural marriage will have less difficulty, but if the issue is to be settled, that's the ground on which the arguments should be fought.