Last of the American locust swarms 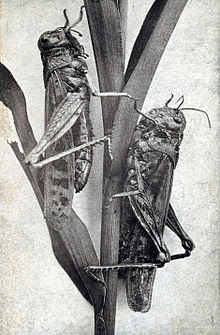 "What do you make of that, Caroline?"A cloud was over the sun. It was not like any could they had ever seen before. It was a cloud of something like snowflakes but they were larger than snowflakes, and thick and glittering. Light shone though each flickering particle. There was no wind, The grasses were still and the hot aid id not stir, but the edge of the cloud came on across the sky faster than a wind. The hair stood up on Jack's (the dogs) neck. All at once he made a frightful sound up at the cloud, a growl and a whine.".........
From On The Banks of Plum Creek by Laura Ingalls Wilder, page 194
This little girl's recollection of a enormous locust swarm descending from the sky is the best eyewitness account of one of the  locust swarms in the 19th century. These locusts, like but not identical to grasshoppers,  used to be the curse of the frontier farmer. The clouds of bugs, clouds so large that they could cover half a state, would arrive,seemingly from nowhere, and eat everything on the ground.  They would travel West to East, sometimes flying over several states, before alighting to feed.

But what happened to this insect, otherwise known as the Rocky Mountain Locust? Why have we not seen in a hundred and forty years the huge swarms of locusts that plagued the early American frontier farmer?
This is the puzzle in the science book Locust The Devastating Rise and mysterious disappearance of the insect that shaped the American frontier. by Jeffrey A  Lockwood.
I have never been much of a bug expert. I know the difference between an arachnid and a insect, and have read a bit about the evolution of insects, including the excellent books by E.O. Wilson on ants.  But I have always been more interested in big animals, like dinosaurs, whales, extinct mammals, and more recently extinct and living birds.  The small animals of the earth  held little interest for me.

This changed after I read Locusts.

This book is a history book as well as a science book. It is a personal account of Dr. Lockwood's struggle to know more about this vanished insect. He paints a picture of an implacable enemy of the 19th century American farmer; how swarms of insects, showing up in a  huge cloud in the sky every few summers,  clouds that could be  hundreds of miles wide, darkening the sky. They would descend and stripping the land of anything green; the sound of their chewing would be quite loud, since there would be millions of insects in the swarm . The locusts ate plants down to the stubble, other bugs; even chewed on clothes and human flesh in the frantic desire for calories and fat.

Farmers would look up and, seeing a cloud on the horizon, realize that it was a cloud of locusts, and know that his crops would soon be completely devoured . The swarms would stay on the ground till all the green was gone, and lay their eggs.

This book has a detailed account of the 19th century relations between the farmers and the US government, who they appealed to for help. Starvation came in the winter of 1873, when the locusts ate a large percentage of  the crops like wheat in several western states. Also there is a detailed account of ingenious inventions  that tried to drive away or exterminate the locusts, either the mature bugs, their larvae or their eggs. This battle shaped American agriculture in the West, pushing the farmers to raise cattle instead, or to diversify into fruit trees or ground crops like potatoes, which could better withstand a locust attack.
That this insect has disappeared in the United States in the early late 19th and early 20th century, and why it disappeared, is the mystery of this book, and the author tells the story very well, his path to figuring out where they went.

There was not effective war by man against the bug, like there was against the American Bison. who were wiped out to try to control/exterminate the Plains Indians.  Instead, the locusts vanished as a result of unintended consequences by the works of man.  Why and how this happened is a great mystery of American history of biology.
But one thing stood out for me personally was that I had read this all before as a little girl, in The Banks of Plum Creek by Laura Ingalls Wilder. This slightly fictionalized autobiography, one of several of Laura Ingall's childhood in the 19th century American West, first published in the 1930's, has an eye-witness account of a locust swarm attacking their farm.  I had found that account chilling and horrifying when I was a child, and remembered it all my life.This author credits Laura Ingalls for having the one of the best eye-witness accounts  of what it was like to live though a locust swarm attack.
The author focuses on how destructive these swarms were, and just how big they where. Showing up several years apart for decades, they were sometimes so big that they were hundreds of miles across.

He also spends a lot of time covering the farmer's pleas for help, and government reaction to this pest, and his own struggle to get information about these swarms. He even climbed a glacier to try to find traces of these swarms from times past from sampling the ice for insect fragments, as, curiously, no samples of their bodies survived to the 20th century.
I can strongly recommend this book for anyone fond of either science or natural history books.  By building the book around the great puzzle of 'how were these insects dealt with by the settlers and the government?" 'where did these swarms come from? What were they really like? 'where did the locusts go, why do they seem to be extinct?" the book is saved from being a dry tome aimed at just students of insects and American history.  I also found the writing to be very good; Jeffery Lockwood has a dry wit, when telling the detailed history of the 19th century farmers who had to cope with locusts

Even when relating the struggle he had to  to get the access to the governments old files on this bug, , the technical matters like the bodies of insects, and why they swarm, this book is not dry or dull. He has a mordant with, sometimes at his own expense, like Stephen Jay Gould is in his books. .
The cloud was hailing grasshoppers. The cloud was grasshoppers. Their bodies hid the sun and made darkness. Their thin large wings gleamed and glittered. The rasping whirling of their wings filled the whole air, and they hit the ground and the house with the noise of a hailstorm
pg 195 On the Banks of Plum Creek.
In the end, the author discovers after years of research,  it was not new farming techniques or pesticides that destroyed the locust. It was (spoiler alert) that one small valley where the locust was indigenous, and swarmed from was farmed back in the 1880's. As this land was developed, there were few and smaller swarms, till in 1902, the last locusts were seen in Canada.

The swarm that Laura saw was one of the last huge ones; the farmers won in the end. Now, North America is the only continent free of Locust swarms.  The author managed to find a few, though; in a national park. As he examines and describes the living insect, you can feel the authors grave respect for this nearly extinct creature. .