Templeton is one of the first talking rats most kids run into.  There are no talking rats in the Winnie the Pooh stories, the first place I encountered talking animals,  because even A. A. Milne would have trouble making a rat cute enough for parents to buy it.
But in Charlotte s Web, we find Templeton in his natural environment, living in the barn where Wilbur has his stall, and acting like a rat; skulking about underfoot,  eating garbage and old goose eggs that didn't hatch. Templeton is the character who give a note of realism  to the book, he is the one who breaks it to Wilbur  that he is being fattened for eating.  I go back and read this book mostly to read what Templeton had to say because of his trenchant wit, witty selfishness, and his cheerful gluttony.He makes an interesting foil for Charlotte the spider's cerebral warm nature  and Wilbur the pig's innocence.and chattiness. . . 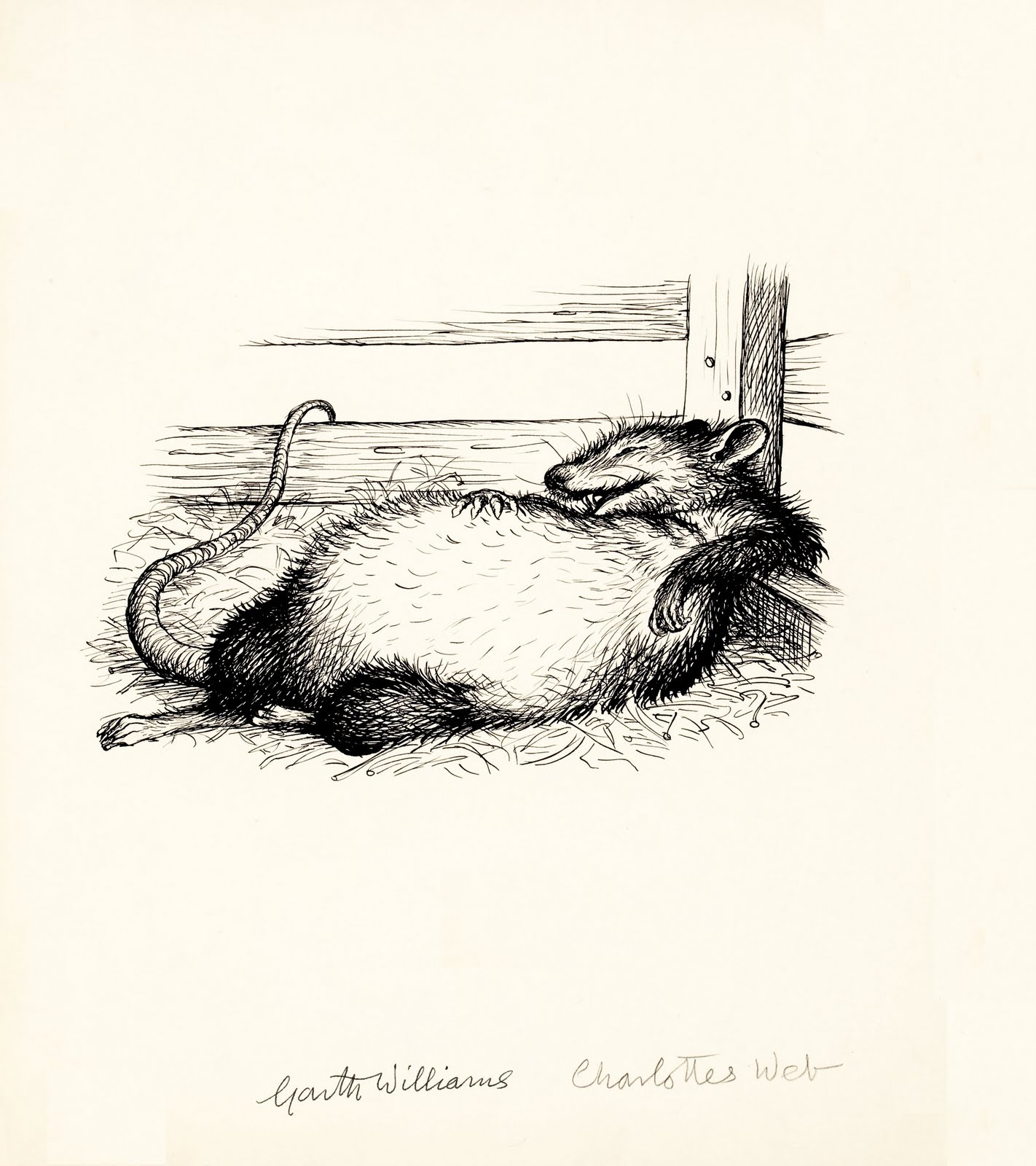 There are smart talking  rats in Mrs Frisby and the Rats of NIMH, and there are smart mice like in the Miss Bianca series, and the Cricket in Times Square, and of course the Rat character in the classic The Wind in the Willows.. Then in adult books, there is Dr. Rat by Kotzwinkle, a dark novel narrated by a Rat who is the survivor of horrible lab experiments, a plea by the author for  for better treatment of lab animals.
I had read remarks linking death and rats where ever I looked. The Black Death still dominates human history.
20th century looked on the history of the world in staccato bursts when you start noticing, as a child.
Ancient Egypt -Classical Greece and Rome-Jesus is born and dies -medieval Europe-Rats and Black Death-New World-World War l +ll-Landing on the Moon-The present day-Bang!  it all seemed like a smooth path of human progress, with humans more or less in control, or at least fighting each other. ....... except the Black Death.which was incomprehensible  to the people it ravaged.
And I knew it had something to do with rats...
The first book I read was Rats Lice, and History by Hans Zinsser, back in high school.  which explained that rats spread The Black Death, or Plague - which killed not only half the of the population in Europe  in 1350, but came back again and again, knocking down the population of Europe for 400 years.
And humans, smart humans, did not have a clue what caused it. No one had a clue what caused  the Black Death. Like the saying goes "life is a rat race and the rats are winning"
At the end of the book, it was revealed that modern medicine found the cause and the cure,though the use of the microscope; finding the culprit in the blood of rats,  so outbreaks could be stopped instead of just managed with quarantines. .
.
Some of the great books about the nature of rats I have read include Rats: Observations on the history & habitat of the city's most unwanted inhabitants (New York) by Robert Sullivan. This book is filled with close observations of how rats behave in this city, and thrive even though there are active and sophisticated  attempts to exterminate them all the time. The author watched one dirty alley in Lower   Manhattan, as well as visiting other cities like Chicago and Milwaukee.
More Cunning Than Man (a Complete History of the Rat and its role in Human Civilization) which covers the whole history of the interlined lives of the rats and humans. This book answers a lot of questions about why black and brown rats behave differently, how one species of rat supplanted the other,  and the impact of the European rat on the New World and the Far Pacific ecologies.
The Story of Rats (their impact on us, and our impact on them) by Anthony Barnett spends some time on the evolution of the white lab rat,  where it came from, and the great contribution lab rats have made to science.  This author spends a lot of time on rat behavior in the wild, and rat intelligence.
I can recommend all four of these books; they each take a different perspective on this animal.
As a local note, the reason we are not overrun with rats on Capitol Hill and elsewhere in the city  is that at dawn, the rats when they do move about are picked off and eaten by crows. Rats are constantly on the move looking for new homes, trying to  expand their territory as they breed very fast.  In the suburbs, it is owls that are doing this work, at night, and hawks in the daytime,  but our local rat population is kept in check by hundreds and hundreds of hungry crows, who love the taste of wild rat.

Crows are, fortunately, even smarter than rats.