Empathy vs. Identity: The clash within civilizations

Why do some people kill in the name of religion?

Religion gives us a sense of how the world works and of who we are. We define our identity in part by what is included and what is excluded. And while we have an identity as individuals, we are most importantly social creatures. Our identity is bound up in the group we belong to, and is defined, in part, on the groups we exclude.

A psychologist once told me that people need three things to be happy: Someone or something to love, someone or something to hate, and something to belong to. Sometimes this manifests itself in being a fan of a football team and beating up people who are fans of the other team. And perhaps we should feel grateful for such petty concerns, because when the thing you belong to is a religion, the battles can get larger.

Religion, for most of the Evangelical Christians I know, is about their relationship with God. But consider the weird world of white supremacists, in which the Christian Identity movement added a whole mythology about race that does not exist in the Bible. They teach that whites are descended from Adam, and that Eve had sex with Satan and conceived Cain. The Bible says nothing about the race of the brothers, and it gives no indication that Eve ever had sex with Satan or conceived a child by him. All the Christians I've known have assumed that they were both fathered by Adam and were obviously of the same race.

Yet the mythology of the Christian Identity Church asserts many things that are not in the Bible, but reinforce their belief in themselves as a tribe of the pure, as being better because they are white, even if they are failures as people. Timothy McVeigh, who killed a lot of people when he bombed the Oklahoma City Federal building, was heavily influenced by the Christian Identity movement. It allowed him to think of his victims as somehow less than human, not worthy of his empathy. Their pain and their deaths meant nothing to him.

But we could not be social creatures if we did not have a strong instinctive aversion to killing each other.
Human beings have certain safeguards built into them. It's really rather difficult for most people to kill someone, for example. People drive around in powerful wheeled missiles every day, yet most of them manage to get through their day without killing anyone, despite how easy it would be, showing just how kind, considerate and careful people really are.

Our moral sense is based on empathy, our ability to know how others are feeling. We can understand the importance of the Golden Rule, to treat others as we wish to be treated, because we have the ability to feel the pain we

ourselves inflict. This is why psychopaths are so disturbing -- they don't feel the pain they inflict. For most of us, conditioning a person to kill involves a major psychological shift. We have to stop thinking of the person we are killing as human. The means to do this are well established in many cultures. You give the enemy a name -- the Hun, the Commie, the Fuzzy-Wuzzy -- that defines them as different from your group, not quite human. You portray your own side as being on the side of the angels, and pray to God for victory.

Because this is about tribalism, it need not include religion. Portrayals of Germans as "the Hun" in Great War propaganda are as relevant to tribalism as are the Islamic State and Al Qaeda calling American troops "crusaders."

Islamic State's propaganda magazine, Dabiq, put it this way: There is “no third camp present: The camp of Islam and faith, and the camp of kufr (disbelief) and hypocrisy — the camp of the Muslims and the mujahideen everywhere, and the camp of the jews, the crusaders, their allies, and with them the rest of the nations and religions of kufr, all being led by America and Russia.” 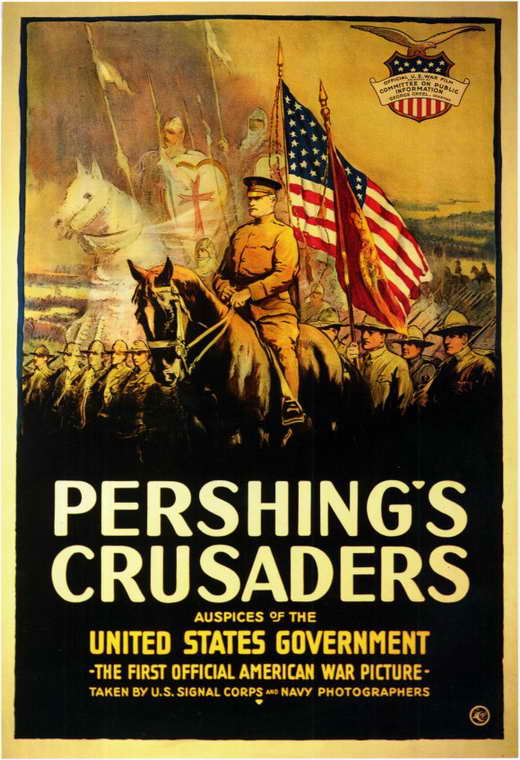 I suppose some in the Arab world are still fighting the Crusades just as some in the American South are still fighting the Civil War. For them, it didn't end with the defeat of the crusaders' Kingdom of Jerusalem in 1291, there was pretty much continuous warfare between Arab and Christian empires for hundreds more years. When the Turks lost the Battle of Lepanto in 1571, their opponents didn't call themselves crusaders, but they did call themselves the Holy League. When the expansion of the Ottoman Empire was stopped at the Battle of Vienna, it was the culmination of a 300-year struggle between the Holy Roman Empire and the Ottoman Turks. While the Reformation resulted in the rise of secular states in the West, the Ottoman Empire continued to dominate the Arab world until it was dissolved in 1922, and the impetus for its dissolution came from the West.

This makes it easier to understand why George Washington's administration negotiated a treaty with the Bey of Algiers that stated that America is not a Christian nation and has no argument with Muslims. (The language, found in Article 11 of the treaty negotiated under Washington and approved unanimously by the senate and signed by President John Adams was as follows: "As the government of the United States of America is not in any sense founded on the Christian Religion,-as it has in itself no character of enmity against the laws, religion or tranquility of Musselmen,-and as the said States never have entered into any war or act of hostility against any Mehomitan nation, it is declared by the parties that no pretext arising from religious opinions shall ever produce an interruption of the harmony existing between the two countries.")

It may have seemed quaint at the time that the Bey was still worried about whether America was a Christian nation, and a potential source of crusaders, but we now have people both in Muslim countries and in America making exactly the claim that George Washington, John Adams, and the entire U.S. Senate near the founding of our country rejected -- that America is a Christian nation.

Osama bin Laden's second fatwa, in 1998, referred to its four signors as the "World Islamic Front for Jihad Against Jews and Crusaders," and concerned itself mainly with American activities in the Middle East, including its support for Israel. Osama bin Laden clearly thought America was a Christian nation, and opposed its presence in Saudi Arabia for that reason.

For bin Laden, all Christians were Crusaders, and although secular states allow people to follow their own religious conscience, only states that do not do this -- states that dictate only Islam is the true religion -- are legitimate. He was worried about the Muslim world being seduced by Western ways. For him, religion was not just a personal relationship with God, it defined who were true people, and who were false people. Religion for him was a tribal marker, not personal salvation.

The problem was how to convince people in his own world of this. He hoped to accomplish this by coordinating a horrendous act -- attacks on the World Trade Center, the Pentagon, and the (failed) attack on the nation's capital -- in hopes of provoking a response that would put American troops in Arab nations, and start a war between those nations and America.

This is not too different from Timothy McVeigh's notion that blowing up the Alfred P. Murrah federal building in Oklahoma City in 1995, killing 168 people and injuring another 880, he could start the sort of race war depicted in The Turner Diaries, a novel written by a former leader of the National Alliance, a white nationalist organization. The book, which McVeigh sold at gun shows and sometimes gave away, depicted the overthrow of the U.S. government and ultimately the extermination of Jews, homosexuals, non-whites, and others the author deemed impure.

The objectification of government workers as the enemy enabled McVeigh to suspend any empathy he may have possessed and kill them in large numbers. For bin Laden, the issue was not even that some of the people working in the World Trade Center were Muslim, their association with a global system of commerce dominated by the "crusaders" of the western nations made them less then human, things that could be sacrificed to the goal of a conflict between the groups as he defined them.

The lesson I take from this is to make sure we do not suspend our empathy, or make objects of those we must deal with. In World War II, military planners were distressed to find that only about 20% of our troops were actually engaged in shooting at the enemy during battles. By Viet Nam, pretty much all the troops involved were shooting at the enemy, in part because of changes we made in training.

But consider this. After the battle of Gettysburg, 85% if the rifles found were loaded, and 30,000 muskets -- that's 40% -- contained multiple loads. Given the usual cycle of firing a musket, very little of the time would one be loaded, and very seldom would someone put more than one load in by mistake. But if you were in a line of infantry with muzzle loaders, everyone could tell if you were loading, but when the guns went off, who could tell if you were firing? Furthermore, who could tell if you were firing high? And when you compare the number of people killed in battles between lines of infantry to the results of lines of infantry firing against non-human targets, it becomes evident that many must have deliberately aimed not to hit their targets.

One would think that such desertions in place would make an army ineffective. But German WW I veterans advised the next generation fighting in WW II to "do your duty and surrender to the first American you see," as Kevin Grossman noted in his fine book, On Killing. And U.S. Grant's troops may have hesitated to kill their opponents, but he took more prisoners than any other general in the war. Part of this is because he preferred to cut off the enemy rather than annihilate them, but part of this is because the prospective prisoners were more likely to surrender to an army that thought of them as human.

We should also not allow ourselves to be defined by our enemies. Those in my country who wish to define us as a "Christian nation" may not realize it, but they are dupes acting just as the radical Islamists want them to. We do not win by adopting this tribal view of religion as identity, because those are not the values on which this country was founded, and they are not the difference we have from past civilizations. The difference is that we allow freedom, so that people can worship as they wish without the law dictating their faith to them. We win when we recognize other human beings as human beings.
Email Post
Labels: clash of civilizations clash within civilizations Islamic State McVeigh Osama bin Laden