Dan Beard - why is he forgotten? Mark Twain's great illustrator 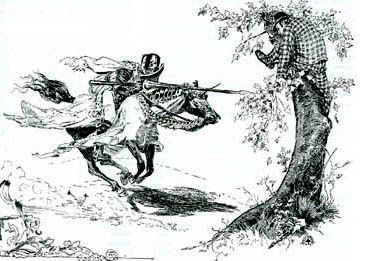 There was a big fuss, a few months ago, about Mark Twain's autobiography, which was released one hundred years after his death. He had instructed his estate to sit on the book that long, before publishing it, as he had controversial remarks to make in the text. I got a copy of this book, and read some of it; it did not seize me the way some of his earlier books did. I was wary about it, due to the fuss that was being made by everyone.  I am more interested in forgotten books, that I can't understand, considering the fame of Mark Twain, are not reprinted in their proper, restored editions.

In particular a forgotten, restored edition of Yankee in King Arthur's Court, with Dan Beard's brave, outrageous, political caricatures.   Twain said this when he wrote this book "I am writing it for posterity only; my great grandchildren....of course I do not intend to publish it.". He had been inspired by Sir Thomas Malory's Le Morte d'Arthur and the story of Jeanne d'Arc, and had turned the tale in his mind into a satire. All editions - that I know of - of this book have been heavily censored from the first few printings. Not the text, (though his editor had made him remove some passages 'improper in tone'), but the original illustrations.

It is very hard to find any of the original illustrations at all - they are too outrageous for modern tastes - or the publishers are ""protecting"" modern readers from the illustrations. preferring to substitute bland watercolors or no illustrations at all. (They do show up on Google Images.) But these are  the illustrations that Mark Twain intended to accompany the text.    Mark Twain said of Beard and his illustrations "My pleasure in them is as strong and as fresh as ever. I do not know of any quality they lack. (later)...what luck it was to find you! There are hundreds of artists who could illustrate any other book of mind, but there was only one who could illustrate this one". In the introduction to this edition, and this one only, there is a key to show where Dan Beard was lampooning present day figures in the text; another reason to obtain this and only this edition of this book.

Dan Beard claimed so, and after a careful examination, I can only agree with him. The only edition that I found, that is very cheap on line, which has all these illustrations and explains what happened to them is the

Chandler Publishing Company, 1963 The author listed is S. L. Clemens, as the heirs of Mark Twain would not allow a facsimile edition published under the name "Mark Twain", in 1963.  This book is available  on ABEBOOKS.COM for about $8.00, and is worth it. This is a great treasure.  To read this book of Twain's without these illustrations would be like tackling Alice in Wonderland and Through the Lookinglass without Tenniel, but worse.

Beard's illustrations are bawdy in places.. They also explicitly attack the Catholic church, both individual clergy and the pope. And most of all, they attack inherited wealth and power, and the divine right of kings, over and over. The illustrations also attack slavery, as it would have been practiced in the medieval world, showing bloated priests, royalty and knights being carried on the backs of skinny peasants. There is a strong suggestion by Beard, by the faces he puts on his kings and others that the situation has not changed much.   The text wraps around the pictures; they are embedded and illustrate the actions on the page, like a very good children's book. Adult books used to be like this; the modern reader will not have seen the like before, as this style is very old fashioned and only remembered by the better children's authors.

Everyone should own this exquisitely wicked, true book. The influence of this particular Twain novel is very large. Many science fiction authors have stolen from Twain, to write time travel yarns, without catching the pathos of the hero, who tries to fix the world he finds himself thrown into, but finds the dead hand of history against him.   This book beat into print, as it was published in 1889, beat H.G. Well's novel The Time Machine by six years which came out in 1895. Both had philosophical points to make about time, but Twain's story, I think, holds up better.
Email Post
Labels: by Jamie Lutton