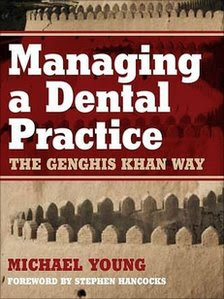 The title of this post is the winner of a contest sponsored by TheBookseller.com. It is an actual book about managing a dental practice, though I'm not certain I'd want my teeth worked on by Genghis Kan or his acolytes. The author, Michael Young, may know his audience better than I.

Of course, I still prefer Oral Sadism and the Vegetarian Personality, which I've written about before, and Antonio Pigafetta's Words of the Big-Footed Giants.

Nor am I convinced that Managing a Dental Practice the Genghis Kan Way is better than The Generosity of the Dead, which made this year's short list for oddest title. But Young's book won fair and square in a vote on the website, so I suppose I shouldn't complain. Pigafetta, after all, wrote his book about half a millennium too soon to enter the contest. His book wasn't published until the 18th century, but even a 200-year delay wasn't enough to make his book eligible,  and I suppose to wait any longer would have looked like cheating.

And in the annals of odd titles, can anyone really compete with An Arsonist's Guide to Writer's Homes in New England, which did not win TheBookseller.com's contest at all?