Bonney in the twilight zone

Slowly at first, then more quickly, the world began to disappear around her. Small items went first, just here and there, a few books (she didn't read) and random items of His clothing. This didn't trouble her much. She had His company, which was the important thing, and food and water, a view of prey which, sadly, she was not allowed to kill. She had the company of his other companion, one of her own species. When she was very young, she was treated badly, but that was before Him, and He was the only one of his species she trusted.

Her kind had evolved to hunt the arid grasslands, and were swift and agile, with sharp claws and sharp teeth. The big, clumsy things who ate grain had stores of the useless stuff, which attracted the small grain eaters, which attracted her kind to kill and eat the small grain eaters. The two species had formed a symbiotic relationship, and both had eventually found that bonds of affection grew between them, uncomplicated by a common language or mating pattern.

Her kind did not have names, they had smells unique to each, which complicates writing about them. I will assign, at random, the names Bonney and Bunny. Bonney was the bigger, stronger, smarter and more beautiful of the two, but Bunny had the greater courage and more dominant personality. Bonney ran from loud noises, Bunny ran to confront them. When they ate, Bunney was always pushing past her to eat first, when it came to His affection Bunny was ready to claim it and chase Bonney away. Sometimes she pushed it too far, but Bonney loved her like a sister, which is to say she sometimes beat the crap out of her. And she did claim her own share of affection, and that was the important thing.

Then the world started to disappear more quickly. Large swaths of books came off the shelves and disappeared into opaque cubes, clothing as well, but she had no need of clothing, her own fur with its dazzle camouflage pattern proving stylish in all seasons.

Then other big, clumsy grain eaters came into the world, and made noise and made more of the world disappear. Terrified, Bonney went to her best hiding place. He knew about the hiding place -- she'd spent the first week in His world hidden from Him there -- but was too big and clumsy to pursue her into it, and none could get her out if she didn't want to come. It was a crawl space that she could barely fit into. Bunny didn't come in, but stood guard at the entrance. This was a time when Bonney appreciated Bunny's strong personality.

A roaring creature with a long snout began to feed on small objects, roaring in a most terrifying way. Sometimes it emitted a sound like one of her species being tortured, possibly because that was what was happening, Bonney wasn't sure but did not intend to find out by becoming a snack for the creature.

Finally, the noise stopped. The creatures all went away. The world was empty, with all those objects that bore the comforting smell of Him gone, just flat plains, the white opaque reservoir still filled with water, the eating area with every trace of edible things and utensils He used for eating gone. The soft, short, tan grass of the main living and sleeping areas were without their comforting clutter, all smelling of Him, even the smallest scraps of paper sucked up by the devouring thing that roared.

Bunny ran around inspecting the strange, silent, empty world. Bonney cautiously put her nose out and saw what was there, then retreated, lest she, too, be devoured.

Time passed, and He came back. Bunny frolicked around Him, rubbing against Him, demanding affection, as if no longer noticing that the world was mostly gone. It was her way, Bonney knew. Confront the danger, secure alliances, those were Bunny's goals when faced with danger. Perhaps it made sense if you had Bunny's boundless self-assurance, her belief that she could defeat any threat. But Bonney had no such illusions. She has seen far worse than Bunny ever had, she felt her mortality in her bones, and though He offered affection, offered her favorite food, cooed and coaxed, she stayed in the darkness of her sanctuary.

Then He was gone, and Bunny as well.

Bonney had always feared abandonment, feared the loss of His protection and affection. Her worst fears seemed realized. The world was empty, both of objects and of love. She began to fear she would die there in her sanctuary, having avoided the unknown fate that Bunny and all the objects in the world had suffered. Night closed in, but night was the time her kind evolved for, and cloaked in darkness, she finally emerged, inspected the world, and found it as empty as she feared. Strange smells infested the world, smells of substances that seemed designed to remove all trace of the smells she knew and found comforting. She retreated again to her sanctuary, knowing Bunny was gone, He was gone, the world was a desolate, empty waste, and she would die alone.

Then, the next day, He came back. He cooed and coaxed, lured her with her favorite food, but she was steadfast in her terror and would not emerge. Finally she came close enough to the entrance to her sanctuary that He could stroke her cheek. This was her undoing, for it was love, not food or water, that she would die without.

She rubbed against Him, first with her cheek, then He let her put her scent on Him with the glands in her face, so she could claim him again. Gradually she emerged, let Him caress her neck her ears, her face, rub her all over her furry body. The world started to seem right again.

Then He blocked the access to her sanctuary. He pinched the skin on her shoulder, where there was a flap of skin her mother had carried her by in her mouth and a nerve that, when pinched, made her muscles relax. He put her in a cell with opaque, off-white walls and steel bars, which rose in the air and moved her swiftly into a transport device the technology of which she did not begin to understand, and began to move them through the space between the worlds.

She had no reference for the sounds and smells around her. Even Bunny would have been terrified, she knew. The voyage seemed to last an age, but finally they came to a new world, where He let her out of the portable cell.

She smelled Bunny, and books, and Him. Some of the objects were familiar to her, some were not. Out of an abundance of caution, she ran quickly around and found a new hiding place, which seemed safe but was infested with new smells and new sounds.

It was a full day before she emerged. She waited until the place was quiet, night had fallen, and the artificial day the clumsy ones required finally went dark. She emitted a pitiful wail, and the artificial day began again, and He came, and she came out and claimed him with the scent from her face and let him caress her. Then she went to earth again, unsure of what this new world would bring, happiness or the sorrow she always feared lay in store for her.

Gradually, she emerged more often, finding where He slept and demanding his love, claiming it and rubbing against him.


And that, I'm pretty sure, is how my cat Bonney saw the move to new quarters. 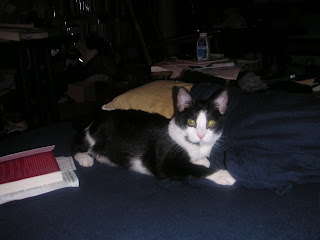