The Great Mutiny, by James Dugan, a book about some history that is far too often forgotten 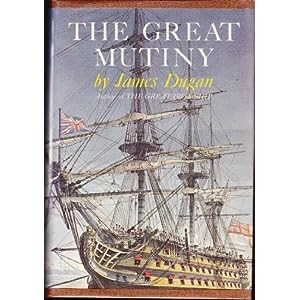 A friend is getting his carpal tunnel opened up (I envision brave Chinese workmen blasting rock, Irish immigrants hammering spikes to build nerve pathways that will open up this important route to the hand) so he'll be laid up a while and asked for book recommendations. It's occurred to me lately that I'm writing too much about politics and not enough about books, so here's one I recommend to any of my readers who find themselves laid up. Or not, you could read it just for fun, like I did.

The Great Mutiny, by James Dugan, first published in 1965.

England was at war with France in 1797, and the entire Home Fleet mutinied. Napoleon was unaware of the mutiny, but was, just by coincidence, sending an invading force consisting of the Legion Noire, a unit made up of the dregs of the prisons and galleys (the official name of the unit was La Seconde Légion des Francs. Their uniforms, captured from the British, were dyed with indifferent success a sort of dark brown/black color which gave the legion its name.)

The British mutineers certainly had a point. It wasn't just that the pay scale for the British Navy was established in 1658 and there'd been a bit of inflation since then, it was also that many of them hadn't been paid in two years. After two years' service at sea they were not granted shore leave because their officers, knowing their men to be rational, expected them to desert.

And remember, the pursers on these ships hadn't seen their wages rise in 139 years, either, but they had a way to supplement their income. They could cheat the sailors on their victuals.

In fact, service in His Majesty's Navy was so prized a profession, the Navy had to send out press gangs to kidnap unwary sailors (or, should the gangs run short of sailors, tailors, farmers, etc.) Volunteers were clamoring to have nothing to do with the Navy. But even so, the sailors swore that if the French fleet should come out, they would sail out to fight them. They were fed up, but still patriotic.

Meanwhile, the French fleet was landing la Legion Noire at Fishguard, Wales, under the command of an elderly American named William Tate, who spoke no French (also under the mistaken impression that the Welsh would rise up against their English oppressors.) The French captains, unaware of the mutiny of the fleets at Spithead and the Nore, were afraid to hang around and land supplies for Tate and his men, so they left as soon as they disembarked the last of the Legion.

The French had invaded Britain, and had done so in such a way as to get rid of an annoying American and a large number of criminals. Since they had equipped the legion with materiel captured from the British, it cost them next to nothing to be rid of the lot of them.

Spoiler Alert! There, now those of you who don't know how the Napoleonic wars came out can remain in suspense.

Tate, realizing that his forces lacked anything to eat or drink, sent his men out to forage for supplies. His men, being for the most part thieves, were right up with him on the part where they were go out into the countryside looking for farmhouses that might contain food and brandy or wine (that part of Wales was heavily engaged in smuggling, and a Portuguese ship with a cargo of wine had been wrecked not long before) and possibly a young lady of the house or two. The instruction to bring food back to the Legion's camp they viewed as a bit silly, really, since they were (once in possession of said food) warm, fed and a bit tipsy, and no one was shooting at them. Manly camaraderie with Tate and his staff palled in comparison.

In the meantime, Captain William Bligh's ship was one of those involved in the mutiny at Spithead, and his fellow captains viewed him as the local expert on mutinies, since it had happened to him once already, on his 1787 voyage to get breadfruit from Tahiti. As it happened, he was the wrong sort of expert. He had a third mutiny while governor of New South Wales, and by then, the authorities didn't even bother to hang anyone. Some folks just can't get along with people, and Bligh's ship was the last to surrender to the authorities at Spithead.

Though the leaders of the mutiny were hanged, there were reforms and pay rises for the common seamen.

Next, perhaps I'll recommend something about the War of Jenkins' Ear. It really is my favorite name for a war, after all, and it had historic consequences of which all too few people are now aware.