Signs of the counter-enlightenment 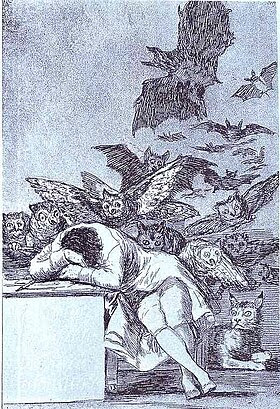 The newest iteration of the counter-enlightenment is fully upon us. Now it's not just new-age beliefs, fantasy literature or fundamentalist religion of both the Christian and Muslim churches, there are actually people being arrested for sorcery.

Of course, these arrests are part of a feud between Iranian President Mahmoud Ahmadinejad and Supreme Leader Ayatollah Ali Khamenei about who should be Iran's Intelligence chief, but the belief in sorcery is surely a Great Leap Backwards. One wonders what punishment is in store for the magical practitioners in Iranian justice, and whether they will escape with the aid of their djinn.

The counter-enlightenment was primarily a reaction against the excesses of the French Revolution, and had its heyday in the late 18th and early 19th centuries. Its advocates have included Edmund Burke, with his preference for tradition over reason, the Romantic writers with their emphasis on intuition and beauty, 20th century conservatives, feminists, environmentalists and postmodern Marxists -- in short, a heterogeneous group that had nothing in common except that they felt the Enlightenment had over-emphasized reason as a guide to how we should understand our lives and how we should live them.

This is entirely appropriate, as the Enlightenment was itself a far from homogenous movement. The Wikipedia entry on the Enlightenment includes figures from James Cook to Emanuel Swedenborg, and groups from the Royal Society to the Freemasons to the Grub Street hacks. What they had in common was a belief in reason as the primary guide to understanding the world and to telling us how to live in it. This emphasis on reason led to to a questioning of traditional sources of authority, academic, religious and political. It produced great advances in science, the Industrial Revolution, the American system of government, and to a certain hostility to organized religion, exemplified in the deist movement, whose adherents included Thomas Paine, James Madison, Thomas Jefferson and Benjamin Franklin.

It's natural enough that a "divine watchmaker" was not the sort of God that everyone wanted to worship, and fundamentalists of any church would have reason to oppose it. The Enlightenment grew, in part, from the corruption of a Catholic Church that seemed, prior to the Reformation, less concerned with truth or faith than with power and money. The authority of the church was in question when advocates of reason as a guide gained ground in the world of ideas, but reason was not the only possible alternative. Another was a return to an older way of thinking, a less rational and more emotional faith, exemplified by religious leaders from Martin Luther to Billy Graham. Another response was a return to old beliefs about ghosts and magic, exemplified by the Spiritualist movement. Still another was the philosophy of sturm und drang (literally storm and urge,) stressing emotion and subjectivity as a counter to the constraints of rationality.

Now, I happen to like the American system of government, with its insistence on freedom of religion (which requires, of course, freedom from other peoples' religion being imposed on you) and emphasis on freedom of speech, and thought. I can certainly see the point of the traditionalists and romantics, and I certainly enjoyed Lord of the Rings (though on reflection the multi-ethnic industrial society of the Dark Lord Sauron looks more like the society I live in than the world of knights, magic and religion to which the heroes of the trilogy belong.)

And I certainly don't care for the arrogant intolerance of evangelical atheists who wish to convert me to their way of thinking any more than I do for the Ayatollah's own intolerance. But arresting sorcerers? Is this the sleep of reason? I know that in parts of Africa, religions are valued for their potency against witches, and I suppose that's to be expected -- we don't all have the same history, after all, and the Enlightenment was a European export. But is it really time for a new translation of the Malleus Maleficarum?

Or does the Age of Reason continue to add converts, while the Ayatollahs fight a rear-guard action? It could be that the Jasmine Revolution is the real future of the Arab world, and we will not see the abandonment of reason. We do not know an Age has ended until some generations later, someone notices that it's gone.
Email Post