Dominionism, environmentalism, and giving up moralizing for Lent 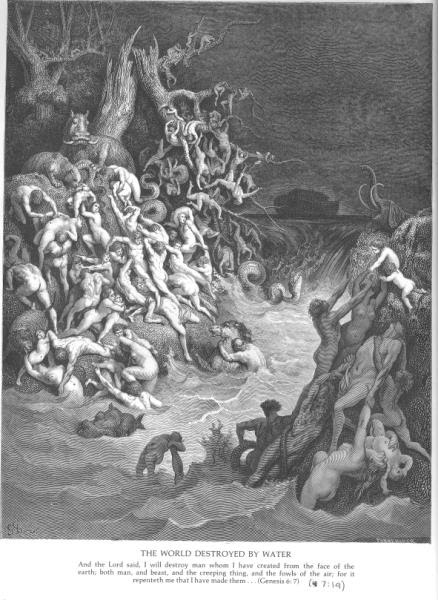 I've given up moralizing for Lent, but perhaps I will permit myself to comment on the moralizing of others.

We discussed Rick Santorum's Dominionist insistence that there should be no separation between church and state in this post, but did not really delve into his views on environmentalism, which also rise from Dominionist theory.

Asked to justify his claim that President Obama's policies stem from a "phony theology," Santorum added a critique of environmentalism:

“When you have a worldview that elevates the Earth above man and says we can’t take those resources because we’re going to harm the Earth …  it’s just all an attempt to centralize power, to give more power to the government.”

This, like his view of the separation of church and state, is based on a peculiar interpretation of a passage from Genesis:


And God blessed [ Adam and Eve ] and God said unto them, "Be fruitful, and multiply, and replenish the earth, and subdue it: and have dominion over the fish of the sea, and over the fowl of the air, and over every living thing that moveth upon the earth." —Genesis 1:28 (KJV)

From Santorum's point of view, this means that we are supposed to lord it over the earth, not "serve" it. Of course, he misrepresents the environmentalist point of view in claiming that it elevates the earth above man. No parent I know would give a child a puppy unless the kid agreed to take care of it. Would Our Father give us an entire world to look after with any less expectation? After all, he didn't tell Adam and Eve to be damned fools about it (surely the extinction of a species is likely to earn at least a short "time out" in purgatory.)

Liberals have tended to respond to Santorum's claims with bemusement, but why not take them seriously and examine them in light of what the Bible actually says?

After all, Genesis 1 is pretty early in the Bible, and he may have provided additional guidance. In fact, later in Genesis, he made a covenant with Noah and his descendents. From Genesis 9:

God, then, essentially put Noah and all the creatures he had saved in the same boat. The covenant is, he says, "between me and all flesh that is upon the earth." He has promised not to destroy life on earth with a flood, and given us the rainbow as a symbol of this peace.

Does this in any way give us permission to destroy life?

Nor was this the last word. In Jeremiah 31, the Lord says he will make a new covenant with man.


33 But this is the covenant that I will make with the house of Israel after those days, says the Lord: I will put My law in their minds, and write it on their hearts; and I will be their God, and they shall be My people.

And what law is that?

This was about making man subject to His law. But it was not the last word, either. The Letter to the Hebrews tells us that the covenant described in Jeremiah 31 is realized in the death of Christ. This is the new covenant that supersedes Leviticus, which is why Christians are no longer required to sacrifice animals, view blended fabric as an abomination, keep kosher or otherwise follow Leviticus. If you are a Christian, surely the sacrifice of Christ is your means to salvation, not following whichever laws of Leviticus you find convenient or going all the way back to Genesis 1 and ignoring the rest of the Bible.


7 For if that first covenant had been faultless, then no place would have been sought for a second.

Well, if God says that first covenant was flawed, shouldn't we take his word for it?


13 In that He says, “A new covenant,” He has made the first obsolete. Now what is becoming obsolete and growing old is ready to vanish away.

Mr. Santorum is conservative, and I understand that he does not want what is becoming obsolete and growing old to vanish away. But his view of man's pact with God, and the moralizing he has based on it, was obsolete before the whole of Genesis was written.
Email Post