The Blue Man speaks of octopus ink, and all I see in link rot and the Rapture of the Geeks (Publishing in the twilight of the printed word continued) 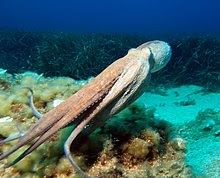 He wore blue jeans and a blue windbreaker over a blue shirt, I wonder what his favorite colour was, but his beard was grey and his frame was wiry. He stood in my bookstore and spoke with great authority on the subject of octopus ink (I live where the largest octopuses live, and yes, that's the proper plural, Octopi is either akin to eel pie or pi to the eighth power.)

One day, he warned, we won't be able to get ink, and the only permanent ink is octopus ink, he said he was extracting it somehow (what's in it for the octopus, I wondered) and saving it in vials he buried in his yard (eccentrics: America's renewable resource.)

Now, once, in Yunnan province, I saw one of the last priests of the Dongba religion writing a sacred book with ink made from soot and water, the pictograms looked like something Matt Groening might draw, and I had to wonder as the blue man spoke, when will we run out of soot and water?

But he saw the future clearly, a future with permanence stolen from us, no memory hole needed, it's inherent in the technology, we can edit this post, this very post (which for all you know once contained a terrible blood libel against someone we no longer can recall, someone denied the immortality of words, another example of the death of ghosts.)

People tell me things live forever on the Web, but when did footnotes fade from books? The links I use instead on the blog rot like madrona logs lying languidly after the pollen has fallen in a climax forest. (Without Freud, remember Freud? that sentence would be more meaningless than it is.)

This fellow named Franzen, he wrote that Oprah book, says that the permanence of print is all that protects us from an Orwellian future. Without print, how will we remember? Every word can be changed, just pixels with all the conscience of pixies in a pixellated world.

I sold a book from 1640, I know it said when I sold it what it said when first it saw the light of day. It said it in Latin, it was a travel book, a Baedeker for Beatrice about Italian cities.

But should this blog be all that survives some future cyber war, or the Singularity, that Rapture of the Geeks, would it remain coherent, as the links all rotted away? I've seen dry rot in the deadwood, seen nature have her way with with the timbers of the mast step, seen a Daphne turned to timber that I loved, and had to very nearly give away.

But link rot is the death of all the proof that secured the love of truth in those readers who took the time to follow all the trails that I had blazed in my research. It's a memory palace built of spider silk, more fragile even than the human mind which moves around in a bundle of nerves walking on (two legs bad, four wheels good,) ready to be run down for the crime of pedestrianism, no, it would not even take that act of violence, it could be just eliminated by a power surge, or that fatal key stroke that wiped out the fourteenth century.

But books are a sensual pleasure, and we are efficient people, so we know what will win in the end. We can only hope for the samizdat to survive in the drawers of roll-top desks and not be lost like Hemingway's luggage.

I spoke with a man of the Bai people, who told me that much of his people's culture was destroyed by the Cultural Revolution. His name translated to "The East is Red," so he was certainly a product of those times.

The Chinese did not suffer this fate, because in their culture, there was a custom of hiding important works in interesting times. The works of Confucius, suppressed during the Qin dynasty,  were hidden in the walls of a scholar's home.

Will some future culture recover all it's ancient works, or will it have to rebuild based on copies of Rush Limbaugh's Complete Works preserved in some survivalist bunker?

Sometimes even the mightiest river drowns somewhere deep in the sand.